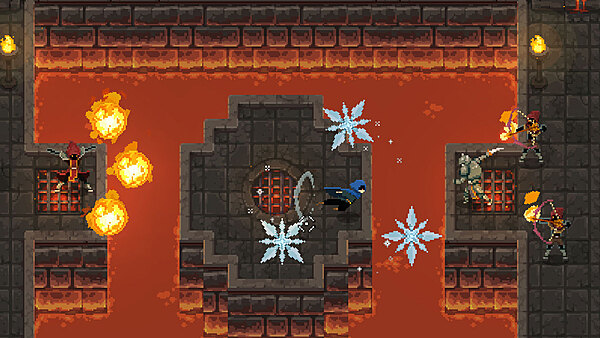 Wizard of Legend will be getting a content update in the near future to celebrate the game's second anniversary. You can get a full rundown of what the update will include below.

New NPC added at home that will allow you to save up to 3 custom loadouts
Run history added at home which records the best runs for the Chaos Trials, Boss Rush, and Endless Mode (walk up to and face new shelf on right hallway)
Party Chests added which spawn at a low chance and include predefined sets of relics and arcana
Added relic and arcana vendors before the final boss along with a short run up encounter
Following relics received headgear visuals: Chaos Visor, Shark Mask, Elven Ears, Jade’s Tiara, Berserk’s Helm, Gilded Helm, Graduation Cap
14 new standard arcana, including 4 new standard chaos arcana
12 new cursed relics
2 new combine relics

Boss Rush mode now also unlocks Chaos Arcana
Loadout NPC added to Versus mode
All stores now offer 1 more item in the line up. Health Potions in the relic store moved to the side to accommodate for the change
Savile now takes less HP when upgrading your outfit during runs
Chaos Arcana have a chance of appearing in the arcana store starting from loop 3 and above
Various price adjustments

Prescription for Sleep: Wizard of Legend on All Storefronts

"I've been working with Dale North for many years, and it made sense for us to pay tribute to his amazing breakout soundtrack to Wizard of Legend," comments album producer Jayson Napolitano. "We're so thrilled to celebrate both the two-year anniversary of Wizard of Legend's release last week on May 15 and the six-year anniversary of the Prescription for Sleep: Game Music Lullabies series today on May 18. We hope you enjoy this very special release to commemorate both anniversaries."

Prescription for Sleep: Wizard of Legend features all the music from the game with the full track list as follows:

"While I had a good feeling early on, I didn't really know that the music I was writing would be for a smash hit videogame!" reflects composer Dale North. "So it has been a pleasure to be able to continue to contribute music to WIZARD OF LEGEND over the past year since the initial launch and now I'm just as thrilled to be able to share them in a complete album. Just as the new dungeons and bosses have expanded the game's world, I hope these new pieces add more depth and enjoyment to players and listeners alike."

Piano Collections WIZARD OF LEGEND features 11 all-new piano performances by AYAKI (Etrian Odyssey, PersonaQ, Prescription for Sleep: Game Music Lullabies), bringing his unique jazz-infused arrangements to the fast-paced action of WIZARD OF LEGEND. Also included is an original theme by AYAKI titled "Realizing One's Potential," which is inspired by a wizard's journey to prove themselves in the Chaos Trials.

"AYAKI's arrangements and performances of the WIZARD OF LEGEND soundtrack feel like a deep dive into the spirt of what I was going for when I originally composed it," explains North. "These powerful, interpretive pieces have a way of transporting you and I feel like anyone that has spent any time in the dungeons will feel that. It's rare to feel so heard and understood as a music maker anyway, but when it's coming from such a talented and accomplished musician it makes this so much more special."

Wizard of Legend has gotten a new update on Switch today. The 'Thundering Keep' update is now live, and you can check out the full patch notes below.

Who doesn't like a bit of free content? Wizard of Legend has been updated to Version 1.1, which includes the Sky Palace content, and a bunch of other tweaks. Check out the full patch notes below.

This is a free update that is now live on all platforms (PC/Mac/Linux, Switch, PS4, and Xbox)
We tried our best to document all the changes, but this is a fairly large update and we may have missed a few things! If you run into any issues, please drop us a line via email, Twitter, or Discord!

Wizard of Legend - 'Sky Palace' DLC revealed, due out this Winter

If you were looking for more content in Wizard of Legend, all you have to do is wait a little bit. The dev team has revealed an upcoming round of DLC called "Sky Palace.” It's due out sometime this Winter, and features more enemies, new signatures, a new chapter, and more content to be revealed.