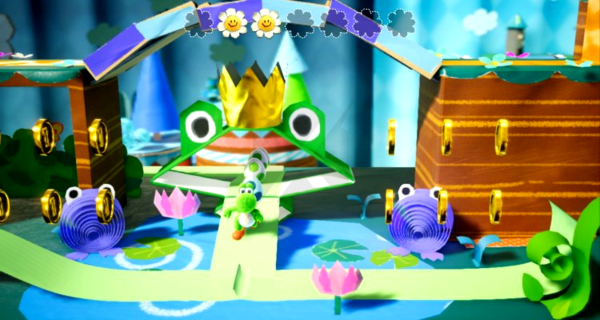 Tomoya Tomita was the driving force behind the soundtrack to Yoshi's Woolly World, a soundtrack I absolutely adore. There were so many fantastic tracks in that game, and Tomita no-doubt should be praised for his work. Many others agree, and a large portion of those fans were very upset to learn that Tomita wasn't returning for Yoshi's Crafted World.

The soundtrack in Yoshi's Crafted World has been met with a ton of criticism, with fans calling it stale, repetitive, and flat-out boring. They've been taking to Twitter to express their distaste for the soundtrack, and none other than Tomoya Tomita has taken to retweeting those sentiments. Seems like Tomita would have loved to be part of Yoshi's Crafted World, and he's not shy about sharing the voices of those who either dislike the Crafted World soundtrack, or wish he was involved.

UPDATE - There has been some discussion as to whether Mr. Tomita is retweeting things without knowing what they actually say. That would still put part of the blame on Tomita of course, but it would be a shame if he didn't know he was retweeting negative info.

On top of that, Mr. Tomita has shared the following statement on the music of Yoshi's Crafted World and Yoshi's Wooly World. It's a bit of broken English, so it's hard to know the tone he's taking, or the meaning he's trying to get across. If anything, it makes it seem like he was happy to find that people enjoyed the soundtrack more in Woolly World than Crafted World.

Hey, I have not denied YCW music. Because I have never heard of it. I was just happy to say that they were better at YWW. 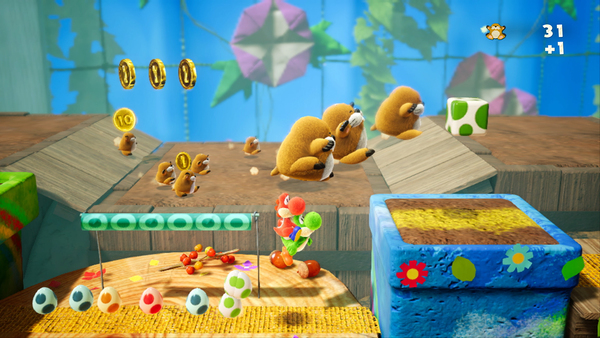 Yoshi's Crafted World has received a minor update, bringing it up to Version 1.01. Check out the full patch notes below.

- fixed the issue where the game would not start when the player uses the analogue stick upon game start up.
- fixed some other issues so the player can enjoy the game.

I have to say, I didn't expect Yoshi's Crafted World to get such a high score from EDGE. They're notoriously rough with their scores. That said, I definitely think Yoshi deserves the praise!

Nintendo has been bouncing around in the top 5 for gaming brand advertisements, but for the time between March 16th and April 15th, 2019, they've secured the top spot by a large margin. This is all thanks to Yoshi's Crafted World, which Nintendo was pushing hard.

Nintendo has some big plans to promote the Switch in Japan for Golden Week. The Big N will be setting up shop in the AEON Mall Makuhari, Chiba on April 29th and 30th, and AEON Mall Kyoto on May 1st and 2nd, 2019. The in-store events will give customers the chance to try out the Nintendo Labo: VR Kit, New Super Mario Bros. U Deluxe, Yoshi’s Crafted World, and Pokémon: Let’s GO! Pikachu/Eevee.

Playing each game will net you a special item for each. The items include a Switch Cardboard Stand, New Super Mario Bros. U Deluxe or Yoshi’s Crafted World clear file, and squeezy Poké Ball.

Jump into a new Yoshi adventure in a world made of everyday objects—like boxes and paper cups! Available now, only on Nintendo Switch!

So I bought that MEGA collectors edition of Yoshi’s Crafted World and I regret nothing!

Remember when Amazon Japan their special Yoshi’s Crafted World bundle that included ten Yoshi plush dolls? In the gallery above, we can check out just what the package looks like! The best part about the whole thing might be the special Yoshi-themed box the package uses, as that wasn't even mentioned in the Amazon listing! 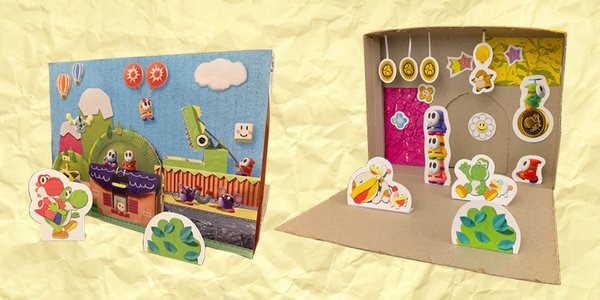 A miniature handcrafted world made by you! For this artsty-craftsy activity, you can create an amazing diorama like one you might find in the Yoshi’s Crafted World game. You can even design the Flip-Side of the diorama to show what’s going on behind the scenes!

If you like the look of these official dioramas, you'll be happy to know that you can make them yourself! All you have to do is hit up Play Nintendo and download the design sheets, print them out, and piece things together!

This week's episode of the Cat Mario Show focuses in on Nintendo Labo VR, Yoshi's Crafted World, and Smash Bros. Ultimate. Check out the episode above!

Jump into a new Yoshi adventure in a world made of everyday objects—like boxes and paper cups! Available now, only on Nintendo Switch!