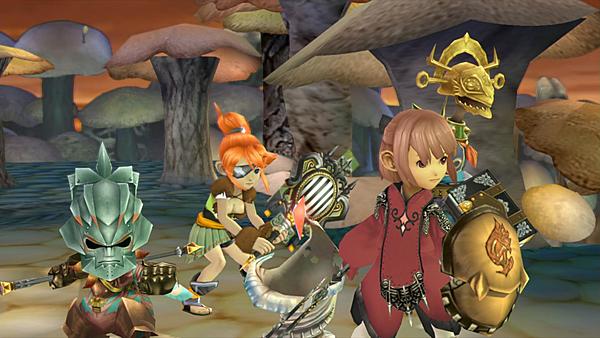 Final Fantasy Crystal Chronicles: Remastered Edition was originally supposed to be out by now, but was delayed to an unspecified date in Summer 2020. While we wait for confirmation on a new date, at least we can see things are moving along on the game.

An Aussie classification for Final Fantasy Crystal Chronicles: Remastered Edition has just popped up, which hopefully means new details are coming soon. The game has garnered a PG rating, which it was given for mild fantasy themes and violence.

Is the band getting back together this Summer?
17 January, 2020 by rawmeatcowboy | Comments: 0 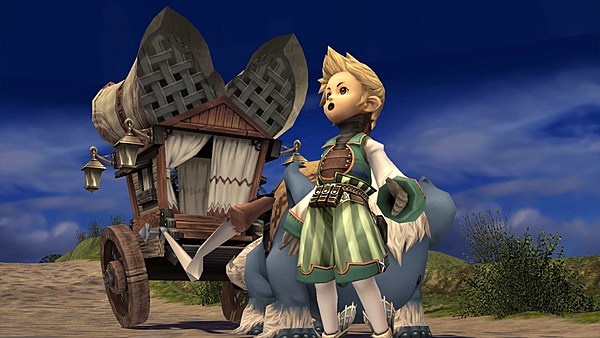 Square-Enix originally planned to have Final Fantasy Crystal Chronicles: Remastered Edition out for the Switch last year, but the game ended up getting delay to some unknown date in 2020. While Square-Enix is yet to share that date, one Polish retailer has just updated their listing with some info.

While not confirmed until Square-Enix themselves announces it, Polish retailer Ultimate shows Final Fantasy Crystal Chronicles: Remastered Edition as launching on Aug. 28th, 2020. I think many were hoping the game would be earlier in the year, so in this case, let's hope the listing is incorrect.

One of the best games you've never played
29 September, 2019 by rawmeatcowboy | Comments: 1 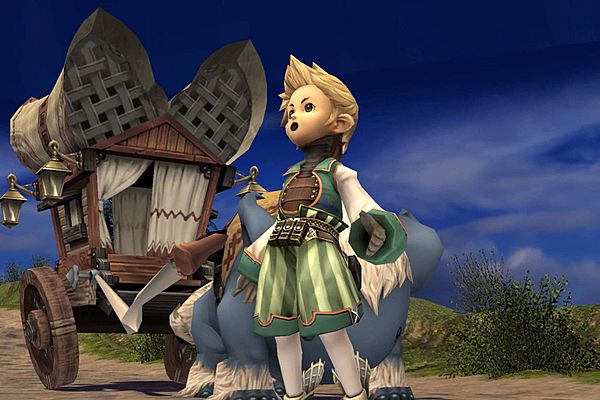 Final Fantasy Crystal Chronicles: Remastered Edition’s producer Ryoma Araki, character designer Toshiyuki Itahana, and composer Hidenori Iwasaki sat down for an interview at TGS 2019. Check out a summary of the interview below.

- Producer Ryoma Araki originally played Final Fantasy Crystal Chronicles as a regular consumer
- he remembers being flabbergasted at how the game really used the specs behind the GameCube/GBA
- Designer Toshiyuki Itahana mentions that the reason why the characters look a bit generic is because of the multiplayer
- this is also because of the character creation aspects of the game
- it wasn’t a game about detailing the individual heroes, as would be in a mainline game
- Itahana considered redoing designs for the remaster, but staff said they’d like to recreate the designs they originally used
- one new male and one new female design have been added to each race respectively
- composer Hidenori Iwasaki mentions that the remaster wasn’t originally going to have rearranged tracks
- the team went for it when Iwasaki called Araki out one day and said, “Hey, I have this on hand.”
- the original game is known for its music, but as there were hardware limitations, there were some tracks that couldn’t be added
- these tracks will be added in for the Remastered Edition
- dungeons originally in Crystal Chronicles will keep the old music, while new dungeons have newly composed tracks for them
- Iwasaki jokes that during the planning phases for the original game, a planner suggested to go with a techno music direction
- one of the big additions to Remastered Edition is the inclusion of cross-platform online play
- Itahana mentions that they still get photos from overseas fans showing that they managed to assemble the 4-player setup
- the console and smartphone versions will have different UI
- for multiplayer, you don’t need to wait in a lobby, as players will show up when they join naturally as you advance
- the team also reiterated that cross-platform saves are a feature for the Remastered Edition
- extra difficult “alternate” dungeons have been added as well, which change up the atmosphere and appearing enemies
- the new dungeons will drop new weapon recipes for newly designed weapons by Itahana
- over 10 new tracks have been composed for the new dungeons
- Araki mentions that remaking the game was an option, but he felt it had to be a remaster for Crystal Chronicles
- this was in order to show to the fans (including himself) that Crystal Chronicles was truly back
- because he played it as a regular player back then, Araki has made sure to change the game in areas that needed updating 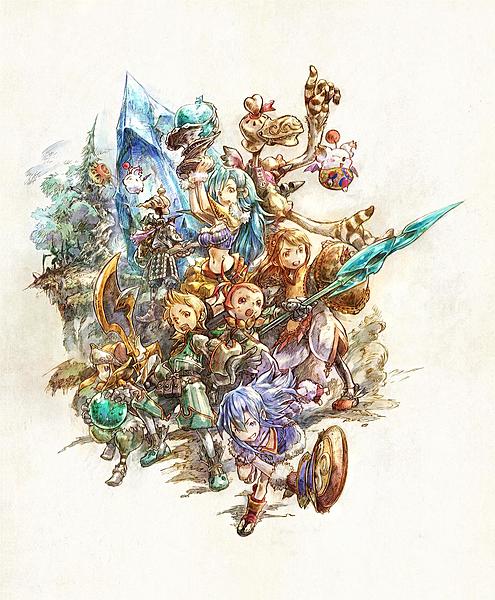 Final Fantasy Crystal Chronicles: Remastered Edition is heading to Switch on Jan. 23rd, 2020, meaning there's a decent amount of time left until launch. What does Square-Enix have lined up to keep us occupied until then? For today, we have a new piece of artwork for the game, created by art director Toshiyuki Itahana. This art features the four tribes; Clavats, Lilties, Yukes, and Selkies.

Square-Enix had a ton of stage shows at TGS 2019, in which they showed off their upcoming slate of the games. If you want to catch up on every single Switch-related stage show Square-Enix did, you can do so in this post! Check out the presentations for Romancing SaGa 3, Trials of Mana, Final Fantasy Crystal Chronicles: Remastered Edition, Dragon Quest XI S, and Star Ocean: First Departure R in this post!

After months of silence after the reveal, Square-Enix is finally sharing some content on Final Fantasy Crystal Chronicles: Remastered Edition. Another round of gameplay footage is available above, as well as even more screens and art. You can check out that content below. 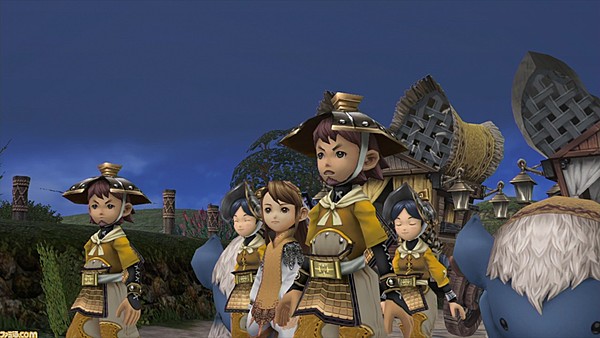 Final Fantasy Crystal Chronicles: Remastered Edition gets another round of screens and art 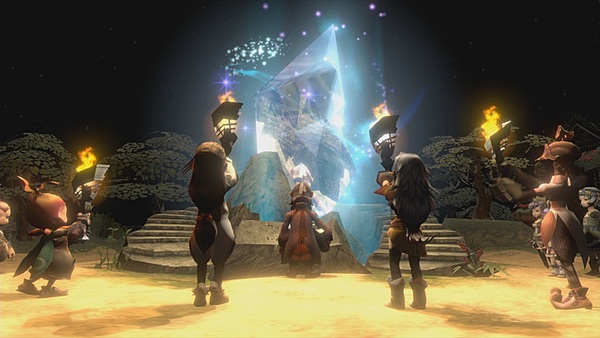 Long ago, a giant meteorite fell on the land, and deadly miasma blanketed the world. Crystals keep the miasma in check, but the crystals' power is not eternal. Young adventurers embark on a journey once a year seeking "drops of myrrh" to purify the crystals. These are the chronicles of brave young adventurers who journey to protect their home. These are the "CRYSTAL CHRONICLES."

Long ago, a giant meteorite fell on the land, and deadly miasma blanketed the world. Crystals keep the miasma in check, but the crystals' power is not eternal. Young adventurers embark on a journey once a year seeking "drops of myrrh" to purify the crystals. These are the chronicles of brave young adventurers who journey to protect their home. These are the "CRYSTAL CHRONICLES."

Along with the new trailers and release date, Square-Enix has shared a host of new details on Final Fantasy Crystal Chronicles: Remastered Edition. First up, we know that Japan will see a retail version and eShop version. It seems both the retail and eShop versions will be priced at 4,800 yen. 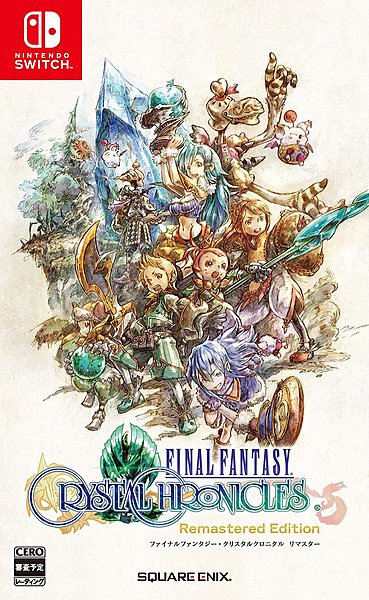 Following that, Square-Enix revealed the one-two punch of cross-play and cross-progression across platforms. Yes, it seesms that Switch players will be able to play with PS4 and mobile players. You can also play your saved game on one platform, and pick it back up on another.

A few other tidbits were announced for Final Fantasy Crystal Chronicles: Remastered Edition to showcase what else is new. Check out the bulletpoints on that info below.

Thanks to Kolma for the heads up! 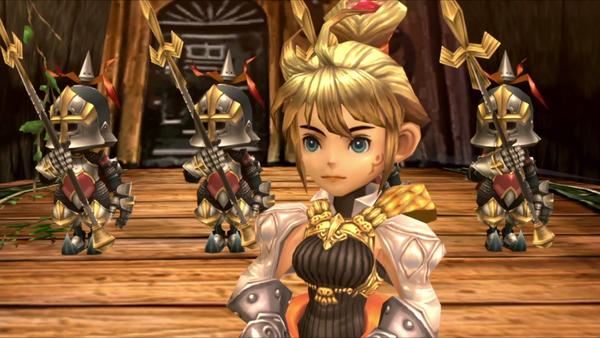 Many fans have been saying that they'd like to have a retail version of Final Fantasy Crystal Chronicles Remastered Edition on Switch. While Square-Enix is yet to confirm anything, it seems that Amazon might have spilled the beans. The online retailer just added a listing for the title, and they'd have no reason to do so if it were digital-only.

The classic co-op action RPG FINAL FANTASY CRYSTAL CHRONICLES® has been completely remastered, now with online multiplayer mode so that you and up to three friends can adventure together! Playing with friends or solo, explore a stunning fantasy world and make new memories with fantastic characters with fun action-RPG gameplay.

SQUARE ENIX also announced that in addition to its release for the Nintendo Switch™ system and the PlayStation®4 computer entertainment system, FINAL FANTASY CRYSTAL CHRONICLES Remastered Edition will also arrive on smartphones this winter. To watch the new trailer now, visit: https://youtu.be/Cxct3RLT0Sg.

SQUARE ENIX announced the arrival of its music catalogue, beginning with music from the FINAL FANTASY series, on music streaming services.

The official SQUARE ENIX music Discord server is also now open for fans around the world at: https://discord.gg/sqexmusic.

*1 Active subscribers includes all active subscriptions in North America, Europe, and Japan, and does not include free trial accounts or users who are on their 30-day free play period.