Solve a Tropical Mystery in the Newest Theme for CLUE 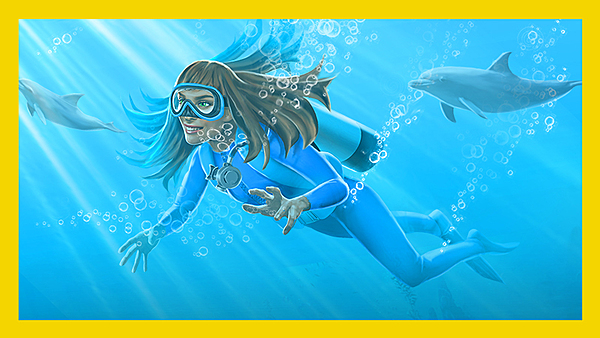 London, November 12th, 2019 - Marmalade Game Studio along with Hasbro, Inc. whisks players away on a wonderful Tropical Mystery in the tenth theme for CLUE/CLUEDO on iOS, Android, Steam and Nintendo Switch.

CLUE/CLUEDO is the quintessential murder mystery classic in which you use your deduction and crime-solving skills to unravel who committed the heinous murder, with which weapon and where. Marmalade Game Studio’s official adaptation for consoles, PC, and mobile captures the undeniable charm of the original and brings it to life effortlessly on your screens.

In the new theme, Tropical Mystery, experience a completely fresh environment with a wholly redesigned board and nine brand-new luxurious rooms on an extravagant mega yacht. As you solve the crime, you move through lavish rooms such as the grand deck with its helipad and exclusive private bar and the enchanting underwater observation room where Dr. Black might still be sleeping with the fish.

Cristina Mereuta, COO at Marmalade Game Studio, says: “With Tropical Mystery we’ve taken the classic board game into a 21st-century setting, capturing the opulent lifestyle of the rich, famous and influential as well as the corruption behind the smoke-screen. However, we're staying true to the spirit of the traditional mystery by having the crime take place in an isolated, confined space, which means the murderer cannot run.”

CEO of Marmalade Game Studios, Michael Willis, adds: “To commemorate the release of the tenth theme, we wanted to give our detectives something special and decided to take them on a glamorous cruise. Our artists brought the luxurious world of billionaire Black and his corrupt consorts to life and we are certain fans of the series will enjoy this much-requested theme.”

Tropical Mystery is the latest gorgeous theme for the popular digital adaptation of CLUE/CLUEDO. It joins a line up well-loved themes such as the Sherlock theme, where players get to tread in the footsteps of the famous English master detective, and Murder Express, which whisks players away on a mysterious train journey to find the truth.

An Egyptian Adventure Awaits in the new Clue theme 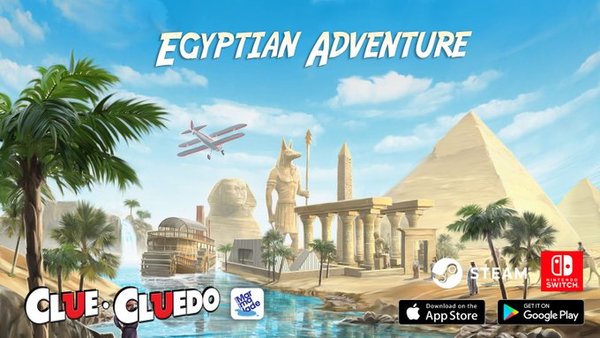 London, August 21st, 2019 - Egyptian Adventure, the new theme for Marmalade Game Studio's CLUE/CLUEDO and an homage to the fantastical world of early 20th-century crime novels, is out now on Nintendo Switch, Steam, iOS, and Android.

CLUE/CLUEDO is the classic murder mystery game by Hasbro, Inc., which has been a staple in many households since the 1950s. The aim of the game is to find out who committed the heinous murder of Mr Boddy/Dr Black, with which weapon and in which room. The first player who deduces the correct answer wins the game.

The new theme, Egyptian Adventure, is Marmalade Game Studio's ninth theme for CLUE/CLUEDO. It references murder mystery stories popular in the 1920s and 1930s and pays a special tribute to Agatha Christie's "Death on the Nile", as well as the classic Indiana Jones adventure films. Players have a chance to experience the wonders of Egypt from the comfort of their living room while searching for clues and solving the murder of Mr Boddy/Dr Black.

Cristina Mereuta, Marmalade's COO said: "We chose the archaeological digs of early 20th century Egypt because they provide a striking backdrop for a murder mystery and give us a chance to explore a diverse group of captivating suspects with conflicting agendas. We're over the moon with the result and can't wait to share it with our detectives."

In Egyptian Adventure, players get a new board with nine new Egypt-themed locations, such as the famous Sphinx, the traditional Egyptian market, and the Pharaoh's tomb, as well as corresponding weapons. Also featured is a motley collection of six new suspects, including Scarlett featuring as an Aviator, Mustard featuring as Egyptian Royalty, Peacock as a wayward Priestess, and for the first time in the digital version, the illustrious Mrs Meadow-Brook.

Egyptian Adventure is the latest instalment in a series of well-loved themes such as Venetian Masquerade, which takes players to the canals of Venice, and, most recently, the Sherlock Holmes theme in which players can play as the famous master-detective and his sidekick Dr Watson.

CLUEDO is known as CLUE in North America.

CLUE and CLUEDO and all related characters are trademarks of Hasbro and used with permission. © 2019 Hasbro. All Rights Reserved.

WHO’s the best consulting detective in the room? Find out with CLUEDO’s new local multiplayer mode on Nintendo Switch and Steam! The highly requested mode is part of May’s update, which also includes a new ‘Sherlock’ theme.

CLUEDO is the digital adaptation of the classic murder mystery board game by Hasbro, Inc. (NASDAQ: HAS), where players need to use their deduction skills to discover who murdered Dr Black, with which weapon and in which room.

The option to play together with friends and family on one screen was the most requested feature upon release of the game but was previously not possible due to the need to keep secret clues and notes hidden from other players. Marmalade Game Studio has resolved the local multiplayer limitation by developing a free mobile companion app, which acts as a game controller and clue sheet on which players can make notes in secret.

Michael Willis, CEO of Marmalade Game Studio said: “One of the best parts of playing a board game is having a fun shared experience together with your family or friends. We want to make sure this is also possible in our digital adaptation of CLUEDO and it’s going to be a part of every board game we make in the future.”

The local multiplayer update releases on Nintendo Switch and Steam on May 3rd, 2019. The free companion app, named ‘Cluesheet Companion’ is available on iOS and Android and can be installed on a mobile device via the App Store and Google Play. Players who own the mobile game CLUEDO: the official edition or Clue: the Classic Mystery Game can also use this app to join a local multiplayer game on Nintendo Switch or Steam.

May’s update introduces a new Sherlock theme as well, which adds a brand new board setting and nine new characters to the game, including Sherlock, Dr Watson, and Moriarty. The Sherlock theme is free for season pass holders or can be purchased as an add-on.

CLUEDO is known as CLUE in North America.

CLUE and CLUEDO and all related characters are trademarks of Hasbro and used with permission. © 2019 Hasbro. All Rights Reserved.

Clue now available on the Switch in Europe (official PR) 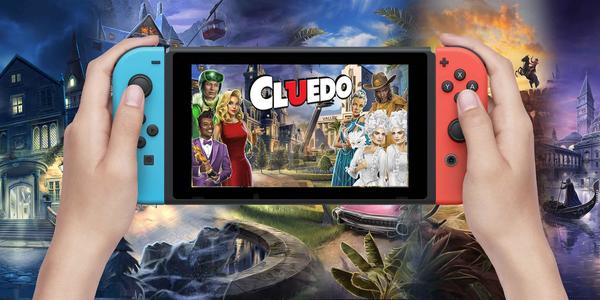 Colonel Mustard on the bus with the Joy-Cons, or Professor Plum on the sofa with the Pro Controller? Players can now decide themselves as Marmalade Game Studio released the CLUEDO game for Nintendo Switch on November 30th, 2018.

“We believe the Switch is going to be the new home of digital games, so we’ve worked hard to bring CLUEDO to life on the platform” said Michael Willis, Marmalade’s CEO, “It looks great on the Switch’s screen, and it looks even better in the dock—we’re really excited about our big-screen debut. The Switch is a modern classic, and CLUEDO is a classic made modern. We can’t wait for players to try it!”

Marmalade has designed the game to be as flexible as the Switch itself. There are a variety of ways to play—single-player, online multiplayer with weekly leader boards, private games against friends and family—and a wide selection of fan-favourite themes, including Hollywood Studio, The Venetian Masquerade, Wild West and Snowy Peaks.

“As the CLUE brand gears up to celebrate its 70th anniversary milestone, we’re thrilled to provide our fans with yet another fresh and innovative way to solve the classic ‘whodunit’ mystery,” adds Rich Cleveland, VP of Marketing, Digital Media for Hasbro Gaming. “With the CLUEDO game for Nintendo Switch, friends and families from across the globe can engage with the infamous – and mysterious – CLUE characters on Nintendo’s innovative platform!”

Ways to play include single-player against customizable AI, cross-platform online multiplayer against players on any device the game is available on, or locally against friends and family. Up to 6 players can take part in whichever mode you choose. Weekly leader boards are updated so players can find the world’s greatest detectives and there are updated Clue Sheets that allow players to make their own notes. Numerous themes are included in this Switch version of the famous board game and there are more to come in regular updates to the game.

CLUEDO is known as CLUE in North America. The game launches in the U.S. on December 17th, 2018. 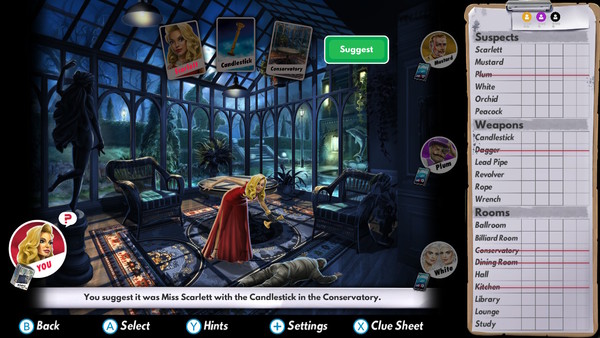 CLUEDO is Hasbro's classic board game - a grand mansion … a dastardly murder … a gathering of suspicious characters. Now you can play the beloved Hasbro family board game on Nintendo Switch!

WHO, with WHAT weapon and WHERE?

Join Scarlett, Mustard, Peacock, Green, Orchid and Plum on a night of murder and mystery in Tudor Mansion. Roll the dice to move around the mansion and ask questions:

“I suggest it was Miss Scarlett, with the Rope, in the Study!”

Single-player against customisable AI.
Online multiplayer for up to 6 players.
Private games against friends.
Cross-platform multiplayer.
Compete against the world with weekly leaderboards.
Innovative logic-assisted virtual Clue Sheet that allows for advanced note-taking.
All new themes available for purchase that transform the board and characters.
More themes to come in regular updates!

We found out Clue was coming to the Switch the other day, but now we know it's already available in Europe! Clue will be hitting Switch in North America on Dec. 17th, 2018.

Clue, the classic board game, is coming to Switch

Clue is the classic mystery game - a grand mansion … a dastardly murder … a gathering of suspicious characters. Now you can play the beloved Hasbro family board game on Steam!

WHO, with WHAT weapon and WHERE?

Join Scarlett, Mustard, Peacock, Green, Orchid and Plum on a night of murder and mystery in Tudor Mansion. Roll the dice to move around the mansion and ask questions:

“I suggest it was Miss Scarlett, with the Rope, in the Study!”

This version of Clue has been released on PC and mobile, but we're not sure what features of those versions are going to be included for the Switch release. At a very base level, we know that the game will have local and online multiplayer. Hopefully we'll have more official details soon.