The rules of Fight Crab are simple: do not talk about Fight You are a giant crab – embark on a world tour of crustacean conquest, flipping over and pinning anything that crab walks in your way. Master classic fighting game moves like blocks, grabs and hyper mode-activated skills, and unlock powerful new crabs and abilities with each victory. Arm yourself with an arsenal of wild weaponry, including the whip sword, nunchaku, axe gun, chainsaw, beam saber, jet engines and more – everything needed to crush the living shell out of your foes!

Claw through a Campaign Mode with 34 stages spread out across 7 chapters, plus 7 tutorial stages.
23 types of playable crab, 48 different weapons and 11 unique battle stages.
A variety of matchmaking options including 1v1, 2v2, and offline and online co-op and versus battle modes.
Unlock special skills like the fabled Kanihameha, devastating Crab Copter and more.
Level up your crab, recruit new crabs, and purchase deadly new weapons to build the ultimate crab warrior.
Nintendo Switch Joy-Con™ motion controls let you freely manipulate limbs to punch, grab and flip your way to victory.
Use Photo Mode to capture, share and immortalize epic confrontations and intense battles.

Get a crab leg up on the competition
15 September, 2020 by rawmeatcowboy | Comments: 0

Fight Crab is coming to Switch today! Looking for a little help in battles? The official tutorial video above should teach you a thing or two. It might be in Japanese, but the tips offered should be easily understandable anyway.

Snipping inside the cellophane
08 September, 2020 by rawmeatcowboy | Comments: 0

Want to take a peek inside the Japanese physical release for Fight Crab? Check out the unboxing video above, which gives a nice look at the full package.

Pre-order Fight Crab from the Nintendo eShop on Switch today 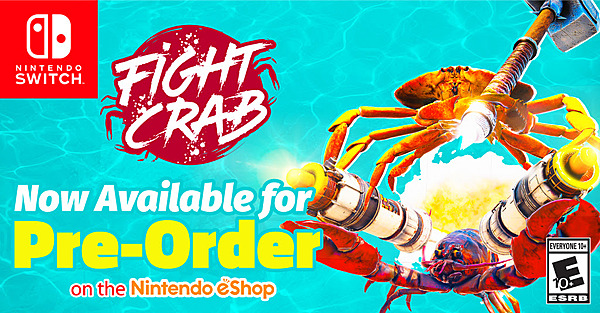 Acclaimed crustacean brawler Fight Crab is now available for pre-order on the Nintendo eShop! Pre-order today and get ready to unleash shell when the Fight Crab releases on September 15!

Learn from Fight Crab's creator!
In our latest video, Fight Crab creator Masafumi Onuki takes you by the claw and gives you the lay of the sea.

Take a deep dive into the combat system, learn more about the crabs and weapons, and take a peek at Fight Crab’s unique motion controls!

Still itching to learn more about Fight Crab? Tune in to our weekly Twitch stream! We're serving up a delicious platter of tips and techniques!

Mastiff will be exhibiting at PAX Online from September 12-20! Stay tuned for more information and please be sure to follow us on social media for the latest clawsome Fight Crab news!

GoNintendo Video - Fight Crab is a thing of beauty

Just a snippet of gameplay
02 September, 2020 by rawmeatcowboy | Comments: 0

Fight Crab is a game about fighting crabs...but it's also so much more than that! I don't even want to spoil what you're about to witness. Just kick back and enjoy the insanity.

The physics-based 3D brawler Fight Crab is coming to Nintendo Switch on Sept. 15. Fans eager to get their claws dirty can add the game to their wishlist right now by visiting the game's product page on the Nintendo eShop, with the option to pre-purchase starting on September 3 for $19.99!

Mastiff and Calappa Games today dropped a new developer video from creator Masafumi Onuki showcasing the game’s Switch motion controls and breaking down Fight Crab’s wide range of offensive and defensive combat options. In just a few minutes, Onuki-san will teach you how to play Fight Crab like a pro. And as an added bonus, the second installment in Fight Crab’s live-action video series is live now, too!

While Fight Crab may look like pure crustacean chaos (and… it is), the rules are pretty straightforward -- flip your opponent and keep them pinned. You’ve got all the classic fighting game moves you’d expect at your disposal, including blocks, grabs, throws and hyper mode-activated skills, with each Joy-Con controlling one of your claws. Weapons up the strategy even further -- strike from a distance with polearms, use the chained sickle to limit enemies’ movement, or just strap a jet engine to your pincer and fly circles around them!

Fight Crab is an over-the-top, physics-based, 3D action battle game that combines giant crustaceans, wild weaponry, and intense claw-to-claw combat into one absurdly hilarious, must-play game. You are a crab – embark on a world tour of devastation, flipping over as many crabs as possible in a quest to be crowned lord of the crustaceans! Unlock new playable crabs, learn powerful skills, and amass an arsenal of deadly weapons like the whip sword, nunchaku, axe gun, chainsaw, and beam saber – everything needed to crush the living shell out of your foes!

Two more Japanese promo videos have been released for Fight Crab. One features numerous songs from the game's soundtrack, and the other is a general gameplay overview. Check those out above!

Fight Crab is coming to Nintendo Switch on September 15th, 2020 (August 20th in Japan). Check out the latest screenshots and trailer in the links above!