Still not convinced that you need one of First 4 Figures' Crash Team Racing: Nitro-Fueled "Crash (Winner)" statues? The company has shared yet another video feature for the statue today, and it gives a much closer look at the finer details. Check it out above.

First 4 Figures revealed their Crash Team Racing: Nitro-Fueled "Crash (Winner)" statue the other day in a quick teaser video. Today we get a much better look at the statue through both a new trailer and a lengthy promo video. Check out both spots in this post.

First 4 Figures has revealed their next statue via a teaser video, and not surprisingly, it's an absolute beaut. The company is working on a Crash Team Racing: Nitro-Fueled "Crash (Winner)" statue, and full details on the statue will be shared tomorrow during a special launch video. Pre-orders for the statue will open right after as well. 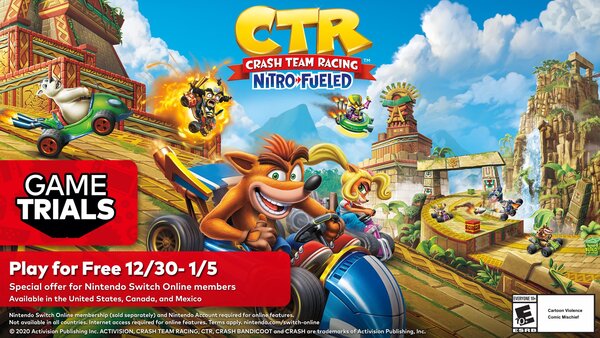 Whenever there's a free game trial for Switch Online members, we usually see it announced in Japan first, then Europe, and finally North America. This time around, things are going in reverse!

North America was the first region to announce the free trial of Crash Team Racing: Nitro-Fueled for Switch Online members, and the opportunity is yet to be announced anywhere else. That said, we know it's being offered in Europe, as the official game page for Crash Team Racing: Nitro-Fueled has a very tiny blurb for it. Looks like Nintendo of Europe will be announcing this on their social channels any minute now.

For those who missed the news yesterday, starting Dec. 30th, 2020 and running to Jan. 5th, 2021, Switch Online members will be able to play Crash Team Racing: Nitro-Fueled in its entirety. This includes the online component as well! Once Jan. 5th, 2021 comes and goes, access to the game will be removed. There's usually a sale for the game during these trial events as well, so be on the lookout for that.

Nintendo is ending 2020 and kicking off the new year with something special for Switch Online members. Starting Dec. 30th, 2020 and running to Jan. 5th, 2021, Switch Online members will be able to play Crash Team Racing: Nitro-Fueled in its entirety. This includes the online component as well!

Once Jan. 5th, 2021 comes and goes, access tot he game will be removed. There's usually a sale for the game during these trial events as well, so be on the lookout for that.

As of right now, this deal is just announced for North America. Hopefully it'll expand to other regions soon.

Crash Team Racing: Nitro-Fueled devs say that there are no more content updates planned for the game 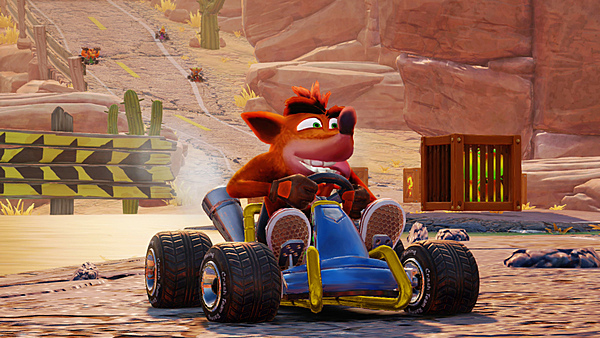 If you've been hoping to see new content head to Crash Team Racing: Nitro-Fueled, we've got some bad news. Developer Beenox has shared a message on Twitter confirming that the game is content complete. You can read their full message to fans below. 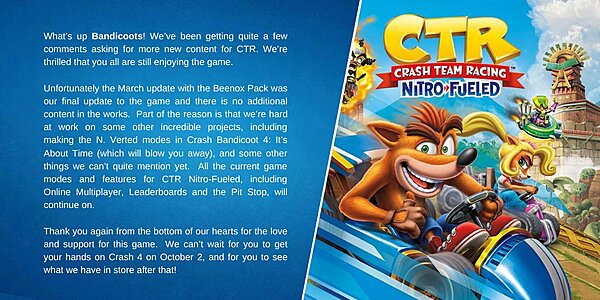 The Gasmoxia Grand Prix has come to an end, but the race goes on! New content* from Crash™ Team Racing Nitro-Fueled is available now, including the bonus ‘Beenox Pack’ of content that will be automatically unlocked for players as a thank you for their unwavering support through all of the Grand Prix seasons.

All players should have to do is download the update while their console is connected to the internet and the content will be available. Players are also invited to try their hands at new challenges, compete against best track times from the Beenox team, explore new content in the Pit Stop, unlock a secret ‘crate’ character and more.

Beenox is putting its bumper sticker all over the bonus new content pack, with Beenox-themed skins, kart, paintjob and wheels, and, for players who haven’t already unlocked them, an automatic unlock of popular characters Crunch and Geary (the latter will also be fully decked out in a legendary skin for the first time ever!). Players can now go head-to-head with the very best as they race against new ghost times in the Time Trial mode that represent the fastest laps completed by Beenox’s development team, with the reward being an amazing new set of Legendary Wheels. For beating best times by Oxide and Velo, racers will be awarded new signature decals, along with a Champion Kart (if not already unlocked) for those who prevail across all of Oxide’s Time Trials. Players who have already beaten these times will have this content unlocked automatically.

Perusing the Pit Stop, players will find three new characters, two new karts, a selection of new Legendary Skins, kart customization items and more. Due to popular demand, Beenox is rewarding players with a new version of Rilla Roo, dubbed “Fixed Rilla Roo”, who will be in the Pit Stop rotation for players who haven’t unlocked him yet. Players who have unlocked the old version of Rilla Roo will automatically get “Fixed Rilla Roo” while being able to keep the old one. Finally, items from each of the eight CTR Nitro-Fueled Grand Prix seasons will also reappear and rotate through the Pit Stop.

Recognized as the Best Sports/Racing Game at The Game Awards 2019 and Best Racing Game of 2019 by IGN, Crash Team Racing Nitro-Fueled will also introduce a new audio experience, where players can listen to each track’s soundtrack through the Options menu. The beloved Grand Prix-style challenges will be replaced with Wumpa Challenges, via rotating daily, weekly and monthly challenges that reward Wumpa Coins that players can use in the in-game Pit Stop. The ‘Ghost Hunt’ challenge type will return to Nina’s Nightmare track, the ‘Golden Wumpa’ challenge will remain, and a host of other fur-tastic updates are slated to roll out on March 26.

For a full rundown on all the new post-Grand Prix content, head over to the Activision Games Blog.

Crash is back in the driver’s seat! Get ready to go fur-throttle with Crash™ Team Racing Nitro-Fueled. It’s the authentic CTR experience plus a whole lot more, now fully-remastered and revved up to the max:

-Start your engines with the original game modes, characters, tracks, power-ups, weapons and controls
-Power slide to glory in additional karts, tracks and arenas from Crash™ Nitro Kart
-Race online with friends and Crash the competition with online leaderboards
-Customize your ride and swag out your racer with n. sane kart items and skins
-Keep the race going with new content and challenges in Grand Prix post-launch seasons

With Crash™ Team Racing Nitro-Fueled, the stakes are high and the competition is fierce. It's the CTR you love, now kicked into the highest gear.

The first rule of driving is to not crash
19 February, 2020 by nintendojam | Comments: 0

Bandicoots get ready to revel in Crash lore with the final Crash Team Racing Nitro-Fueled Grand Prix season launching this week! Deciding earth is no longer of interest, the villainous Nitros Oxide has challenged Crash and team to one last epic battle on his home planet in the Gasmoxia Grand Prix!

During this toxic race to the finish, players will challenge each other on an epic new track high up in Gasmoxia’s atmosphere, where two rival fast-food conglomerates are battling it out for planet domination (and a CTR TV sponsorship). New skins, karts, an imperious new character to unlock and a new track to conquer, touted as the most technical track ever assembled in Crash Team Racing—players will have a wild ride in this Grand Prix season!

- New Track: Are you ready for Oxide’s final challenge, the most technical track ever assembled in Crash Team Racing? Then prepare to take on Drive-Thru Danger! Not for the faint of heart, this track exists high above the skyline on Oxide’s home planet Gasmoxia and pits racers in the middle of a fast-food war between the planet’s two biggest conglomerates—Nuclear Pizza and Toxic Burger. Existing at the fringes of space, it’s filled with twists, turns and risky shortcuts for the bold. The ever-present gaze of Gasmoxia’s corporate giants hangs over the heads of all racers as they strive to beat the track (and each other) and escape this toxic dystopia!
- New Character: As if Oxide’s presence wasn’t enough, he’s enlisted help from the Galaxy’s self-proclaimed ruler, Emperor Velo! Unlock this devious new character in the Nitro Gauge.
- New Time Trials: Velo isn’t just making an appearance this season, he’s providing a whole new challenge in Time Trials! See how fast you really are by beating Velo’s insanely fast times on each of Nitro-Fueled’s courses.
- New Karts: Your intergalactic ride awaits! Unlock three hovering new karts this season: the Void Manta, the Velo Chopper and the retro-vibing Galactic Cruiser.
- Pit Stop Items: When in Gasmoxia, do as the Gasmoxians do! Look like a local with a wide array of new Pit Stop items to swag out your racer and kart in the space-adventuring theme of the planet.
- Champion Kart and Decal: Finish in the top five percent of the Grand Prix leaderboards and win the Champion Kart and Gasmoxia signature decal!