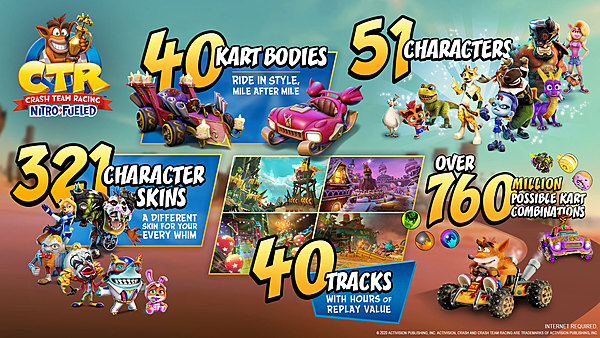 Activision has shared a new dev blog for Crash Team Racing: Nitro-Fueled, and it reveals that the next Grand Prix is going to be the last. Don't worry though, the team has something new cooked up to follow in its way. Check out the full details below.

Bandicoots, details about the new Grand Prix season will be coming next week, but in the meantime we wanted to give you a quick update.

Through the Grand Prix, we’ve delivered fresh, new content to Crash Team Racing Nitro-Fueled. Our community has raced through the multitude of new tracks and challenges with each season and have amassed an amazing collection of new characters and skins and shown their style in insane new ways by customizing all their karts.

We truly have loved creating all this content, and above all we’ve been thrilled by your support. We’re happy to say that although the Grand Prix seasons are rounding out, current and new players alike will still be able to enjoy all the game modes (including online matchmaking), as well as a new ongoing challenge system, new time trials to complete and even a new drop of characters, skins and karts that will hit the track shortly after the final Grand Prix Season (including a long-awaited item that we think fans will be very happy about).

Read on for a celebration of the Grand Prix seasons and for details on what’s next for CTR Nitro-Fueled!

A Recap of the Grand Prix

Since the launch of Crash Team Racing Nitro-Fueled, we will have had 8 Grand Prix seasons that ranged from Spooky to Apocalyptic to Prehistoric in their theme. We’ve been able to introduce hosts of new content that lean into those various themes and build tracks with the n.sane identities that are perfect fit for Crash and Co. We’ve always strived to deliver unique and awesome content that stays true to the spirit of Crash. Because our community includes newcomers and those who have been with Crash since his race began, our commitment to giving a breadth of fun content has been at an all-time high since CTR Nitro-Fueled launched.

Through the Grand Prix, we’ve welcomed many new characters to expand our roster of racers to over 50, including Spyro, Nina Cortex as well as Tawna and the newly-named Nitro Squad.

Plus, with all the tracks added to the game through the Grand Prix, players will have raced on 40 tracks and 12 Battle Arenas that range from the originals from CTR and Crash Nitro Kart, as well as new ones that lean into various moments from Crash lore and the themes of the Grand Prix. Players can continue to experience these tracks throughout the Local Arcade and Online Matchmaking modes.

In addition to the multitude of ways to play, we brought customization to Crash Team Racing for the first time, bringing CTR’s total to 321 skins, 40 kart bodies and tons of kart customization items which provide over 760 million different possible kart combinations - - each one celebrating the creativity and fun of the CTR Nitro-Fueled community!

The race continues as soon as the final Grand Prix ends, with a brand new challenge system. This system gives any driver the opportunity to master challenges, earn Wumpa coins, and further customize their experience with items in the Pit Stop. There will be challenges relevant to all game modes, so players can race and play CTR Nitro-Fueled the way they enjoy most.

Three challenge types will remain active: Daily, Weekly, and Pro (Monthly). Completing challenges will give players varying amounts of Wumpa Coins that they can use in the Pit Stop.

The Pit Stop will feature items from each Grand Prix season. Players will be able to view a variety of items by refreshing the Pit Stop screen up to 2 times per day, to give them more daily options to choose from when customizing their CTR Nitro-Fueled experience.

Oxide is no longer the king of the track - - going live after the final Grand Prix there will be a set of Time Trial records that will be a challenge for even the best CTR racers to beat! These track times will be based on some of the best times achieved by the Beenox team on each individual track. So the challenge is posed for the best racers out there - - can you beatus? By doing so on all tracks, you can unlock a special reward that will let others know you’ve got some serious CTR skills!

Finally, while the Grand Prix is ending, there will still be more items coming to CTR Nitro-Fueled.

Look out for these future additions:

Thanks for enjoying the Grand Prix seasons - - we’ve had a blast making them and seeing how much joy our fans have got from them. The race goes on, though, and we’re excited to continue to see you on the track.

Outrun your opponents in this post-apocalyptic wasteland, where chaos reigns and only the boldest racers earn the spoils! Unlock new skins and karts to gear up for your rumble through an intense new track. Plus, fill your Nitro Gauge to earn a monstrous new character who’s fit for the setting. Lastly, fans might recognize Crash holding a special trophy this Grand Prix. In celebration of winning the Best Racing game at the 2019 Game Awards, Crash is showing off his newly acquired hardware on the title screen in game.

The first Bandicoot Grand Prix of the year!
15 January, 2020 by nintendojam | Comments: 0

The world may be coming to ruins Bandicoots, but the race is still on! 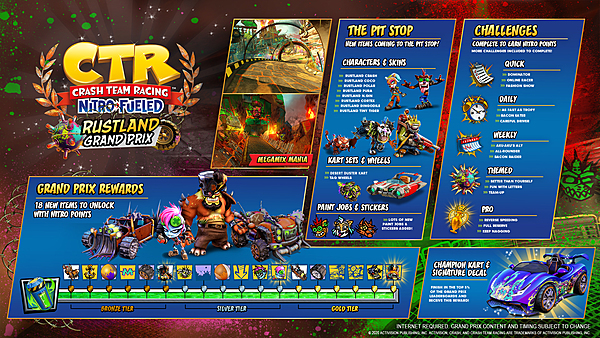 Time to shake the rust off these racers and get ready for the race-pocalypse of a life time! 🤯

Crash is back in the driver’s seat! Get ready to go fur-throttle with Crash™ Team Racing Nitro-Fueled. It’s the authentic CTR experience plus a whole lot more, now fully-remastered and revved up to the max:

-Start your engines with the original game modes, characters, tracks, power-ups, weapons and controls
-Power slide to glory in additional karts, tracks and arenas from Crash™ Nitro Kart
-Race online with friends and Crash the competition with online leaderboards
-Customize your ride and swag out your racer with n. sane kart items and skins
-Keep the race going with new content and challenges in Grand Prix post-launch seasons

With Crash™ Team Racing Nitro-Fueled, the stakes are high and the competition is fierce. It's the CTR you love, now kicked into the highest gear.

Get ready for Rustland
23 December, 2019 by rawmeatcowboy | Comments: 0 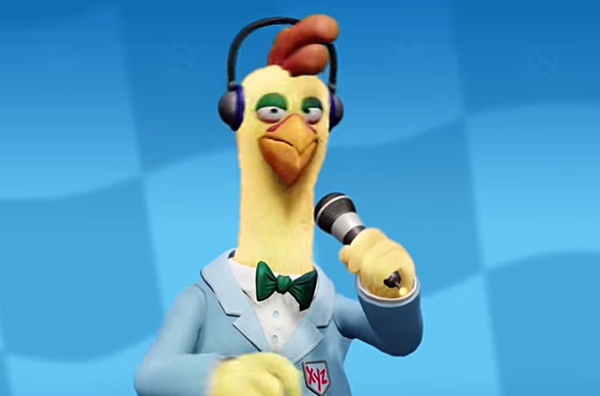 Looks like Activision has more racing fun planned for Crash Team Racing: Nitro-Fueled in the new year. A blog from Activision has confirmed that the 7th installment is coming, which you can see a tease for below.

Then be on the lookout for details on Grand Prix #7 after the new year. Get ready for the post-apocalyptic chaos of Rustland!

Crashing through the snow, in a decked out Nitro Sleigh – your favorite Bandicoot is back and filled with holiday cheer in the Crash Team Racing Nitro-Fueled Winter Festival Grand Prix! Beginning today, the Winter Festival Grand Prix features an all-new track, Gingerbread Joyride, as well as new characters, karts, pit stop items and a very special Spyro skin that’s sure to bring you holiday cheer.

Better put some chains on those tires
10 December, 2019 by rawmeatcowboy | Comments: 0

Crashing through the snow, in a decked out Nitro Sleigh – your favorite Bandicoot is back and filled with holiday cheer in the Crash Team Racing Nitro-Fueled Winter Festival Grand Prix! Beginning December 12, the Winter Festival Grand Prix features an all-new track, Gingerbread Joyride, as well as new characters, karts, pit stop items and a very special Spyro skin that’s sure to bring you holiday cheer. 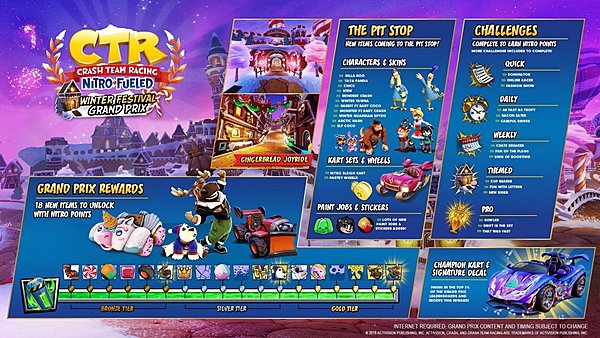 Get ready to race in high-octane holiday style with these cool features:

NEW TRACK: Dash through a holiday scene like no other in Gingerbread Joyride! From the warm, welcoming hues of the gingerbread village to the cool, idyllic scenery of the winter wonderland, this track is sure to fire up some cheer as you cruise past your competition!

NEW CHARACTERS: Rilla Roo and Yaya Panda enter the festivities, as well as a brand new character, Hasty - - a high-flying Moose based on an infamous cut character from CTR lore. But wait, this just in! Your favorite broadcasting duo Chick n Stew aren’t just sitting in the booth any longer - - they’ll also be clucking it up and down the track in this special Grand Prix season!

NEW KARTS: Plow through the competition with the Snowplower, leave other racers salivating with the Candy Cone, and finally take the reins in the ultimate holiday machine with the Nitro Sleigh!

PIT STOP ITEMS: A Reindeer Crash Skin, Pajama Skins for Baby Crash and Coco, scrumptious Pastry wheels, holiday-themed paint jobs and stickers - - there’s no shortage of new swag to celebrate the season! But wait until you see the skin to stand above them all - - Winter Guardian Spyro.

NITRO-GAUGE CHALLENGES & REWARDS: Polar in an ugly sweater, Hasty in a slick ski-suit, and so much more, complete challenges to earn these and other new rewards in the Winter Festival Nitro Gauge.

CHAMPION KART AND DECAL: Finish in the top 5% of the Grand Prix leaderboards and win the Champion Kart and Winter Festival signature decal!

The Winter Festival Grand Prix is bringing the joy early! This Grand Prix season is set to go live on December 12.

Players that take on this electrifying Grand Prix season will be able to race around the bombastic new track, Koala Carnival as they complete challenges to earn Nitro. With this free Grand Prix, more characters from the Crash universe are slated to enter the race and exciting items fill the Nitro Gauge reward set. But that’s not all, there’s a new game mode that will test your mettle, and a special (ahem) chicken makes his royal appearance!

Hello and welcome to the Neon Circus, the next Grand Prix headed to Crash Team Racing Nitro-Fueled this week!

Starting on Nov. 8, players that take on this electrifying Grand Prix season will be able to race around the bombastic new track, Koala Carnival as they complete challenges to earn Nitro. With this free Grand Prix, more characters from the Crash universe are slated to enter the race and exciting items fill the Nitro Gauge reward set. But that’s not all, there’s a new game mode that will test your mettle, and a special (ahem) chicken makes his royal appearance!

As always, new karts will give you a thrill and tons of new skins, wheels, decals, stickers and animated paint jobs will let you showcase your colorful style.

NEW TRACK: Koala Kong is the master of ceremonies for this brand-new track, Koala Carnival! It’s a death-defying big top spectacle, done the way only Koala can.

NEW KARTS: Go off the rails with the Nitro Bumper Kart, relive the Crash Tag Team Racing days with the Pressurizer and take some risks with the Daredevil!

PIT STOP: Put on a show with tons of new Pit Stop items, including Circus-themed Skins, Neon Wheels, and, for the first time, animated Paint Jobs!

ROYAL POULTRY: Head over to the Adventure Mode, explore each of the Hub Worlds, collect the hidden Golden Eggs and unlock King Chicken!

CHAMPION KART AND DECAL: Finish in the top 5 percent of the Grand Prix leaderboards and win the Champion Kart and Neon Circus signature decal! 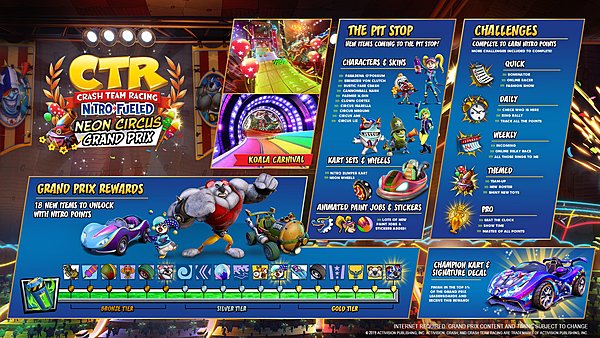 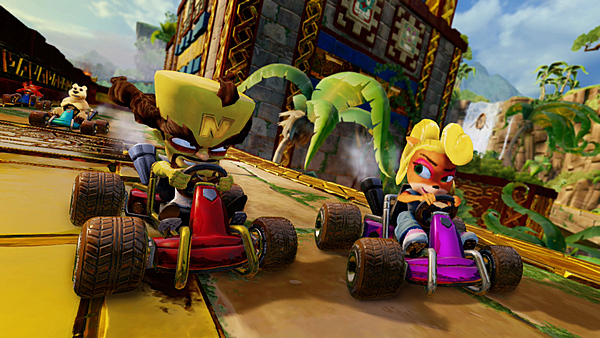 If you were looking for more of a challenge from Crash Team Racing: Nitro-Fueled's online mode, or perhaps a bit of a fair fight, you might want to hop into the game this weekend. The developer has announced that after some testing, they've now implemented skill-based matchmaking into the online gameplay. Hopefully you'll get put in there with some players that'll keep things interesting!

Close to the Sun - more gameplay

It’s 1897. Deep in international waters, the Helios stands still. Dark clouds loom overhead as unforgiving waves crash against the hull. Colossal effigies of gold, decorated with magnificent finery, stretch as far as the eye can see.