Check out some highlighted games that came out during the month of December 2019 on Nintendo eShop, featuring:

Did you know, Slayers, that the Shattered Isles move? Like planets or stars, they drift slowly through the sky, and there are patterns in their somnambulant motion. This time of year, for instance, the isles sink into a lower strata, finding their way to the edge of the frozen Sky Below. It is this shift and movement that brings snow to Ramsgate – but it is the people who live there, fighting the frost, that have made this a time of cheer.

This year, Frostfall brings not only snow and tales of Silver Nikola, but three Frostfall contracts: free limited-time quests with special seasonal rewards.

When can I start it? December 17 to December 24
What do I get? Frostfall Mistletoe Lantern (lantern skin)
Who do I turn it in to? Arkan Drew

THE CAP AND TRADE CONTRACT

When can I start it? December 24 to December 26
What do I get? Watch Cap (helmet skin)
Who do I turn it in to? Admiral Janek Zai

When can I start it? December 26 to January 2
What do I get? Sit Cross-Legged (emote) and Sit Back (emote)
Who do I turn it in to? Xelya the Farslayer

Once you’ve completed a contract, simply turn it in to earn your reward. If you’re a Frostfall veteran and already own a contract’s reward, completing the quest will earn you platinum instead. Finally: The last day to complete your Frostfall contracts and claim your rewards is January 30. Be sure to do what you need before then!

If you’re looking to take your Frostfall celebration even further, take a peek at the Event tab in the in-game store! We’ve brought back some favourites from previous years, including the “Let it Snowball” emote and the Frostfall Regalia Style Kit.

Prefer to take in the sights and stroll Ramsgate’s streets? Drop by the tavern to see a dog in his Frostfall best, or wander over to the waterfall cave and hang out with some real party animals. 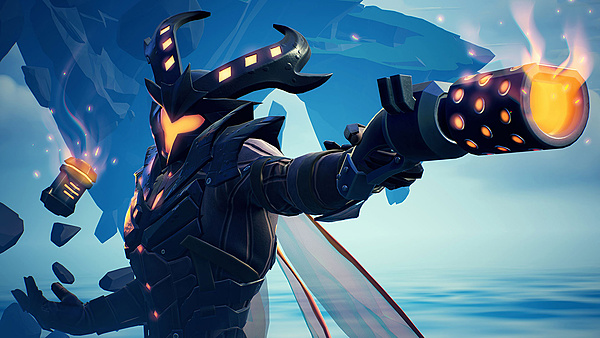 Dauntless has been updated to Version 1.1.1. Check out the full patch notes for this update below.

Fixed the two most common crashes on Nintendo Switch.

Fixed crashes that could occur while loading between Ramsgate and an island on consoles.

Fixed a bug that could cause Health/Lantern UI to not update, and the game to lag then disconnect.

Fixed a bug where axe meter didn’t reset after using a special at max determination.

Fixed a bug where attack speed stacks earned from Grace (perk) were removed upon dodging.

Fixed a bug where amps that impose a round of negative effects followed by a buff for the rest of the Escalation run could trigger immediately if selected too quickly from the amp selection screen.

Fixed a bug where Gnasher, Hellion, and Pangar equipment could fail to unlock after defeating them.

Fixed a bug where Twin Suns (exotic repeaters) purchased from the in-game store wouldn’t persist through an account reset.

Fixed a bug where Skyfighter armour wouldn’t persist through an account reset.

Fixed a bug where the chat box could prevent pressing the Quit to Desktop button on PC.

Fixed a bug allowing the use of Patrol Chests on Escalation or Trials hunts.

Fixed a bug causing “Flagstaff of the First Slayer” and “Hero’s Gate” to have no name or description in the Hunt Pass Elite Track.

Fixed a bug where sprint could only be re-bound to the right trigger on controllers.

Fixed a bug where the Lantern UI would be stuck on empty after switching lanterns in the airship.

Fixed a bug where the Escalation End of Hunt screen showed a placeholder Behemoth in the top corner.

Fixed a bug where the Patrol Chest count on the End of Hunt screen was incorrect.

Fixed a bug where ‘Bonus: Never Downed!’ was shown on the Escalation End of Hunt screen.

Fixed a bug where players could get stuck on the End of Hunt screen if the chat box or quick chat menu was open.

Fixed a bug on Nintendo Switch that could cause the Desperado’s Cloak to appear invisible on other players.

Fixed a bug where the Founder Banner Plant’s flag was on the wrong side of the banner standard.

Fixed a bug where Skyfighter armour could lose its texture and appear as grey blocks.

Join millions of players in Dauntless, the fastest-growing online action-RPG, and explore a massive, free-to-play online world. Stand together and slay Behemoths with your friends from all over the world with true cross-play when Dauntless launches later today on Nintendo Switch. Exclusive to Slayers on Nintendo Switch, the Skyfighter Armor and Skymetal Weapon Set ensure that you look your best on the hunt. This cosmetic set includes weapon skins for all seven weapon types in Dauntless and a stylish armor set.

Two slayers from Phoenix Labs, the developer behind Dauntless, challenge the brand new Shock Behemoth Malkarion for the first time.

Grab some friends and get out there!
10 December, 2019 by rawmeatcowboy | Comments: 0

To celebrate the launch, Phoenix Labs released “Stormchasers,” the biggest free content update to date, adding to Dauntless’ ever-growing live service offering. Stormchasers includes the challenging new gameplay experience Escalation, a new type of sequential hunt that features dual Behemoth encounters in addition to a number of elements of the “roguelike” genre. Escalation culminates in a showdown against a fearsome threat - the shock-infused Behemoth Malkarion. Stormchasers also heralds the arrival of a new Hunt Pass, Myth & Legend, which offers Slayers the opportunity to explore the history and heroism of Ramsgate.

“It’s a dream come true for us to offer Slayers the chance to bring Dauntless with them wherever they go with Nintendo Switch,” said Jesse Houston, CEO and co-founder, Phoenix Labs. “The Switch offers versatility and mobility like no other platform on the market, and with our latest content update and release in Japan, the future is bright for Slayers around the world.”

Dauntless’ expansive new gameplay experience, Escalation, challenges Slayers to best waves of Behemoths imbued with unique modifiers, presenting some of the most challenging battles Slayers have come to face yet. Escalation offers procedurally-generated Behemoth encounters, ensuring that no run feels the same. Slayers can choose from a variety of Amps that offer a range of defensive and offensive boosts following each successful encounter, and unlock more using talent points earned through Escalation runs.

Earning a high enough Escalation level by the end of the fourth encounter gives Slayers the opportunity to face their most difficult test yet - Malkarion. Malkarion is the first Behemoth in Dauntless that gives Slayers a chance to mount their prey, and its unique move-set introduces a number of mechanics that will challenge even the most veteran Slayers on the Shattered Isles.

For more information on Dauntless, and to stay up-to-date on the latest news, please visit the official site at www.playdauntless.com

A daunting task for zero pay
04 November, 2019 by rawmeatcowboy | Comments: 0 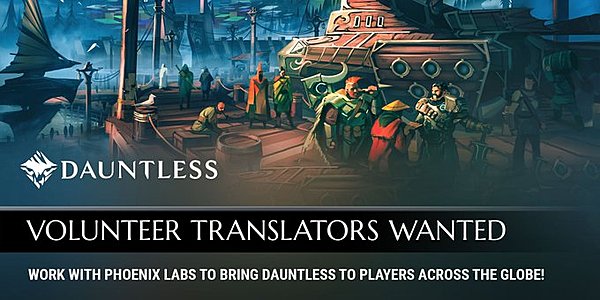 While we don't have hard numbers, I think it's safe to say that Dauntless has been a success for developer Phoenix Labs. Millions of players flocked to the game, and plenty are still enjoying it to this day. More are sure to come once the game finally becomes available on Switch.

Turns out there's a bit more to the expansion plans for Dauntless than just new hardware. Phoenix Labs has put out a request for 'volunteer translators' who'll be helping to translate Dauntless into other languages. This request has rubbed fans of the game the wrong way, as they feel Phoenix Labs should be coughing up some cash for this job, rather than getting people to work on it for free.

We're not quite sure why Phoenix Labs is looking to bring on volunteer staff to handle these translations, other than the obvious answer of not wanting to pay. If anymore light is shed on their reasoning, we'll make sure to bring those details to you.

Thanks to Dondom95 for the heads up!
Source: Link
Rating: -3 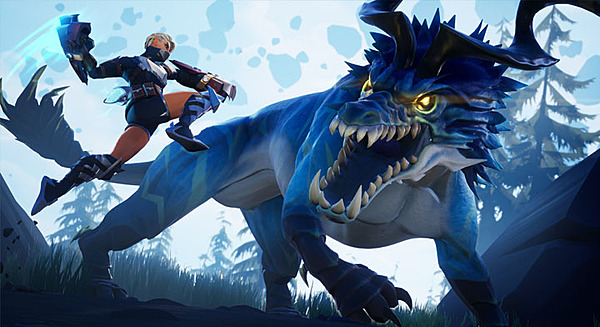 Dauntless might not be out on Switch yet, but it's definitely making its way over. When it does launch, Switch players will get to go hands-on with the Aether Strikers, which are launching for other versions of the game next week. Hit up the link below to get a full rundown of what this new weapon can do.

Instead of acting as an extension of self, the strikers function as a catalyst, transforming the very Slayer who wields them into a weapon of flesh and deadly focus. But the aether strikers can only enhance what is already there. If you truly want to master the Way of the Fist – and prove your worth to the Scarred Master – you’ll need to do more than throw a quick punch. Combos. Chains. Mantras. Techniques. Each aspect of the aether strikers must be understood, practiced, and honed to perfection.

Phoenix Labs announced that Dauntless will be launching out of early access on September 26, ushering in a new era for the ever-evolving, Behemoth-slaying, co-op action RPG on Xbox One, PlayStation 4 and PC. September 26 will also mark the beginning of a new chapter in Dauntless with a major new seasonal expansion, “Aether Unbound.” The update will bring an all-new weapon, Behemoth, Hunt Pass, bounty system and more to the game.

Phoenix Labs prides itself on transparency and its attention to player feedback, the latter of which has informed many of the game's extensive iterations - from combat and progression to the experience, world, and story. With its most recent update (which introduced saved loadouts, a crafting UI overhaul, improvements to transmogs, a new exotic weapon, and more) it has prepared the ground for its official entry into 1.0 on September 26.

After Dauntless exits early access, the living game will continue to grow and expand with new content, seasonal updates, and Hunt Passes, which will provide players with a steady flow of new content to enjoy for years to come. The next season, Aether Unbound, will release alongside Dauntless’ 1.0 launch on September 26, bringing brand new content - including the new weapon, aether strikers - along with it. Slayers will also have the opportunity to unleash the aether strikers on a powerful new Dire Behemoth, Tempestborne Stormclaw, which makes its way to the Shattered Isles as part of the new season. Aether Unbound will also offer a different way to hunt and earn valuable experience with the new bounty system, in addition to offering Slayers a new Hunt Pass packed with in-game rewards. Aether Unbound is just the beginning of an exciting new phase in the Dauntless journey. The team is already hard at work on new features, the following season, and more - all coming later this year. For more information on the latest developments, please see the Dauntless roadmap. 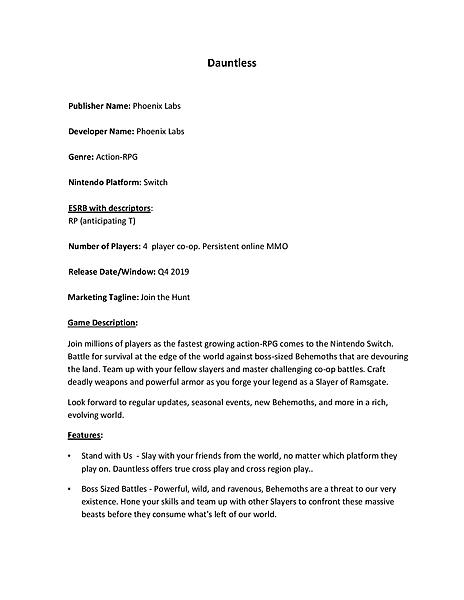 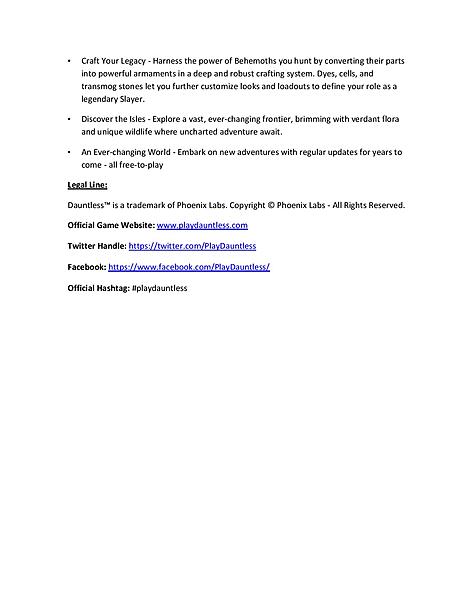