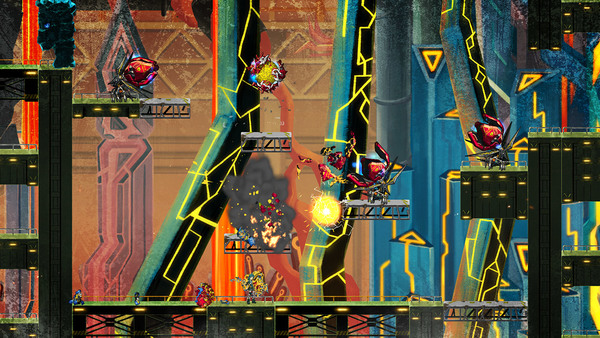 Rising Star has released three character profiles for the upcoming GIGA WRECKER Alt.. Check out profiles for Koutaro, Amane, and Reika below. 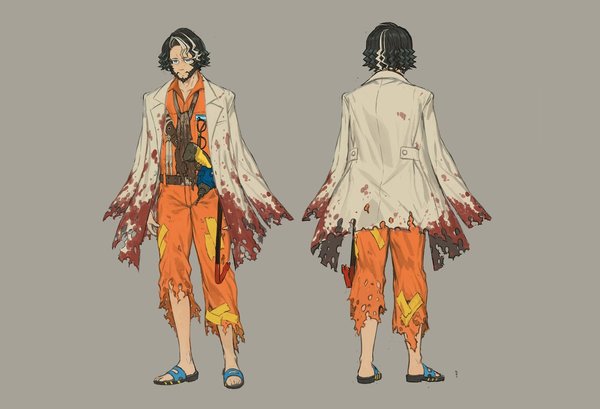 Koutaro Kouzuki is a scientist and self-proclaimed “genius”. He studies micro-sized labor robots called “Nanomachines”. He finds the fatally-wounded Reika in GIGA WRECKER Alt. and saves her from death by altering her body into a cyborg. 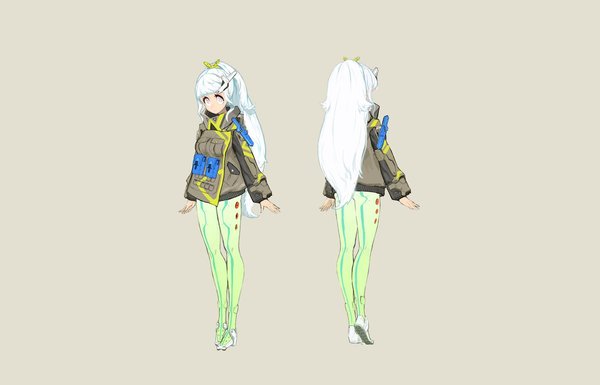 Amane is the mysterious girl who rescued Reika from the Ajeet’s prison in GIGA WRECKER Alt! Even though Reika doesn’t know her, somehow Amane seems to know about Reika. 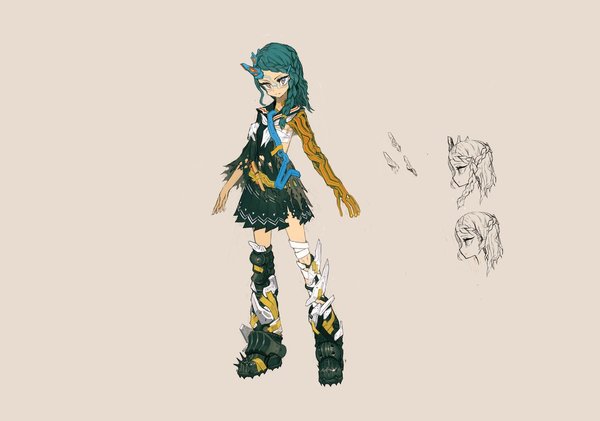 Meet Reika, the main protagonist of GIGA WRECKER Alt. Reika gets fatally wounded after trying to escape from the Ajeet army. She’s saved by a mysterious girl, undergoes surgery by Dr Kouzuki and becomes a powerful cyborg who can control Nanomachines. 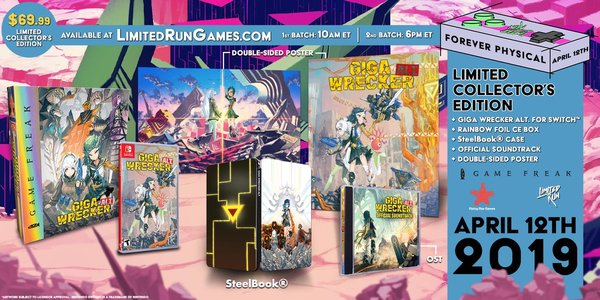 We've already talked about the physical release for GIGA WRECKER Alt. from Limited Run Games, and now we can check out what the Collector's Edition includes. This version will net you a copy of the game, a SteelBook, the official soundtrack on CD, and a double-sided poster. Preorders open on the Limited Run Games' site tomorrow!

Limited Run scoops up another
09 April, 2019 by rawmeatcowboy | Comments: 1

The time has come! GIGA WRECKER Alt., from the legendary dev teams at @GAMEFREAK_info and @RisingStarGames, opens for a month-long pre-order this Friday, April 12th at 10am EDT. pic.twitter.com/A3ZgUFsRdx

It's always nice to see an upcoming Switch release get a retail version to go along with it. Limited Run Games will be offering a retail release for the upcoming GIGA WRECKER Alt., and preorders open up April 12th, 2019. These are sure to to fast, so be ready to snag a copy!

GIGA WRECKER Alt. will not be delayed in NA/EU, still set for May 2nd, 2019 release 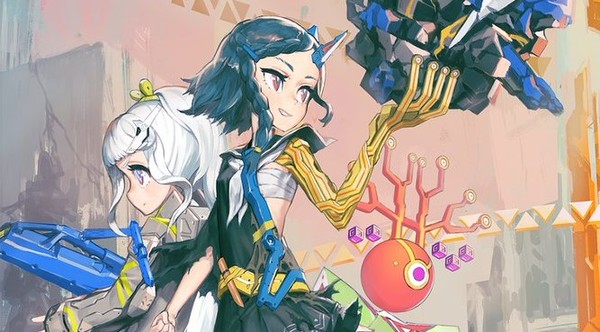 Earlier this week, we learned that GIGA WRECKER Alt. was delayed in Japan. Rising Star stated that the delay was due to "various circumstances," which are yet to be further explained. When news of the Japanese delay broke, many wondered if North America and Europe would suffer the same fate.

Thankfully that will not be the case. Rising Star has confirmed that the planned launch on May 2nd, 2019 is still on for both regions. Let's keep our fingers crossed that things stay that way. 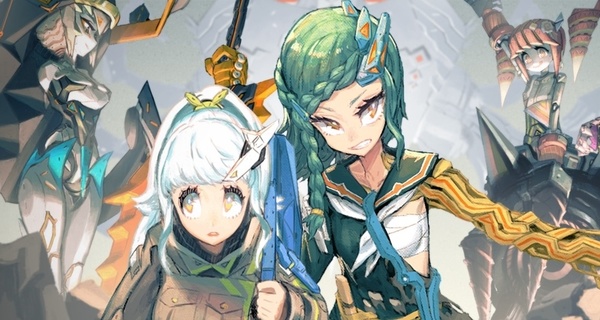 GIGA WRECKER Alt. was originally supposed to launch for Switch in Japan on May 2nd, 2019. Rising Star Games has announced that that's no longer the case, and the game has been postponed to a generic '2019' release. Rising Star says the game was postponed due to 'various circumstances.' No word on whether this delay impacts the NA/EU versions at this time.

SteamWorld Quest, Lonely Mountains and GIGAWRECKER Alt. will all be a part of EGX Rezzed 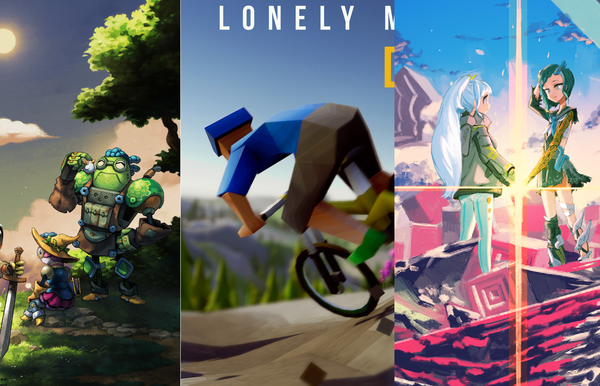 Thunderful Publishing and Rising Star Games are going to EGX Rezzed, and we're bringing some excellent games with us!

SteamWorld Quest is the roleplaying card game you’ve been waiting for! Lead a party of aspiring heroes through a beautifully hand-drawn world and intense battles using only your wits and a handful of cards.

Take on whatever threat comes your way by crafting your own deck choosing from over 100 unique punch-cards!

GIGA WRECKER Alt. comes to consoles with brand-new content that adds 20 additional puzzle stages to its campaign, a new companion character to assist players with the game’s increasingly challenging puzzles, and an “Ironman” mode with 5 times the damage than the regular mode.​

Bring down towering walls and then use the rubble as a platform for navigating each level. Mechanical skill and creative problem solving will be tested in this mixture of exploration and physics.​

Take a thrilling ride down an unspoiled mountain landscape in Lonely Mountains: Downhill. Make your way through thick forests, narrow trails and wild rivers. Race, jump, slide and try not to crash – all the way from the peak to the valley!

Lonely Mountains: Downhill is a Downhill Mountain Biking Game focusing on responsive and fun controls, an open level design and an untouched nature in a beautiful low poly style.

Coming to Steam and consoles in 2019! 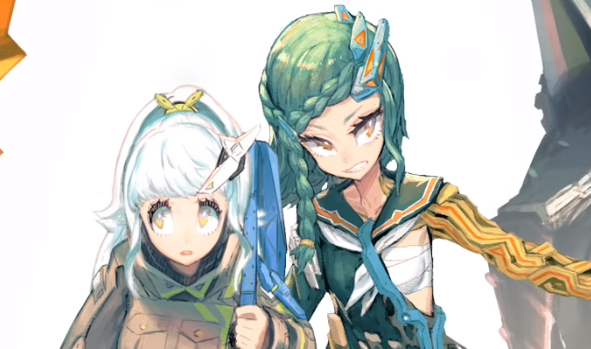 GIGA WRECKER Alt. establishes a 2D world for navigating platforms and solving increasingly challenging puzzles as players progress to unearth the mysteries of a sudden invasion that left the world in ruins. As players explore, they’ll use the abilities of Reika – that game’s main protagonist – to destroy and reconstruct their surroundings for solving each puzzle and fighting back against the invaders.

GIGA WRECKER Alt. was announced for the Switch awhile back, but we didn't have information on the release date. An updated Japanese Switch eShop listing now shows us that the game is slated for May 2nd, 2019. With Rising Star handling publishing duties worldwide, we should see the game launch in NA/EU on the same day.

In the near future, where Earth has been ravaged by robot invaders, the fate of the planet rests of the shoulders of a young girl who becomes more than human. Saved from death and cursed with cybernetic powers beyond comprehension, it's up to Reika Rekkeiji to save humanity from the evil Ajeet in this exciting new game from legendary developer Game Freak!

Get a better look at GIGA WRECKER Alt.'s cover art 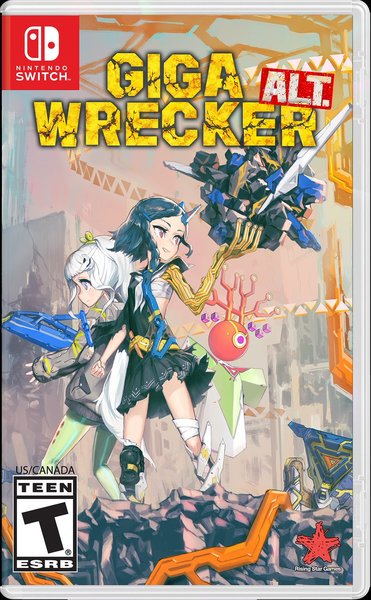 The reveal trailer for GIGA WRECKER Alt. included a look at the game's cover art, but it was a rather tiny version. Publisher Thunderful has since released a much better look at the cover art in all of its glory. I'm not much of a fan of the art style in motion, but I think it looks gorgeous in stills!

GIGA WRECKER Alt. will be digital-only in Japan 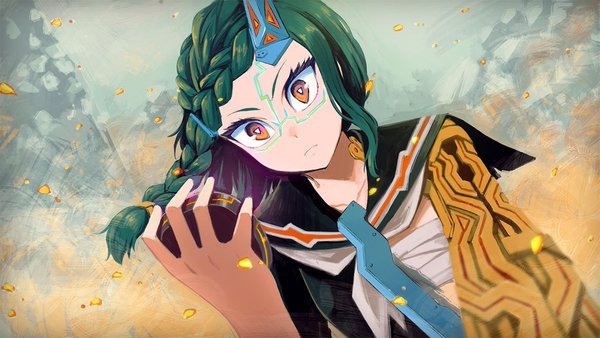 Well here's a bit of an odd story. We are used to Switch games getting retail releases in Japan, but not in NA/EU. Now we have the opposite situation going on with GIGA WRECKER Alt.. It has been confirmed that the title will indeed hit Switch in Japan, but the only option for purchase will be through the Switch eShop. Here in the states and in Europe, you'll have the option of digital or retail.