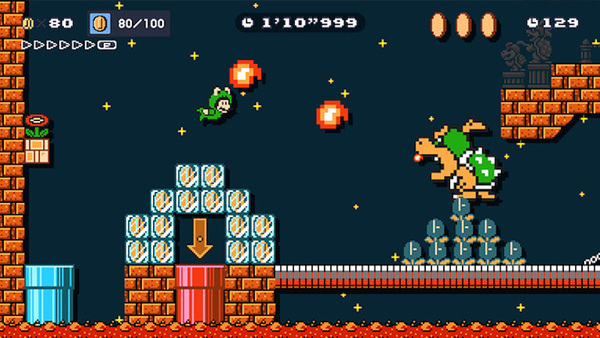 In this stage, the goal is to grab yourself a Frog Mario suit and sneak your way into the castle under the cover of night. To clear this course, you’ll need to collect 100 coins along the way. 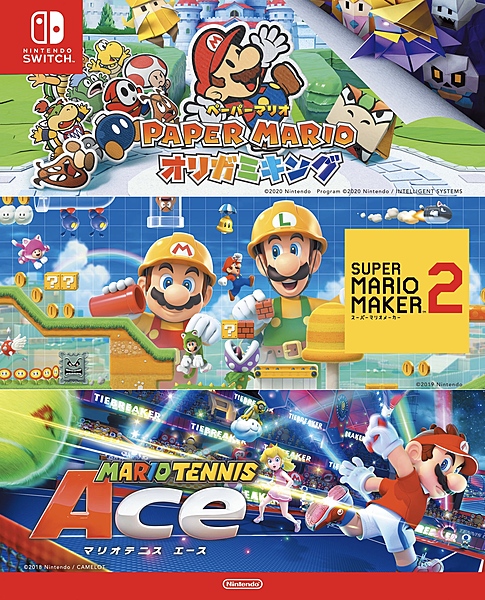 Last week's issue of Famitsu featured a full-page Super Mario advertisement promoting Super Mario Odyssey, New Super Mario Bros. U Deluxe, and Mario Kart 8 Deluxe, but there are even more Mario games available on Switch that can't be forgotten! In the latest September 16th, 2020 issue, Nintendo is advertising another round of titles featuring our favorite overall-wearing mascot. Check out the scan above thanks to JapaneseNintendo.

Getting squirrely
16 September, 2020 by rawmeatcowboy | Comments: 0 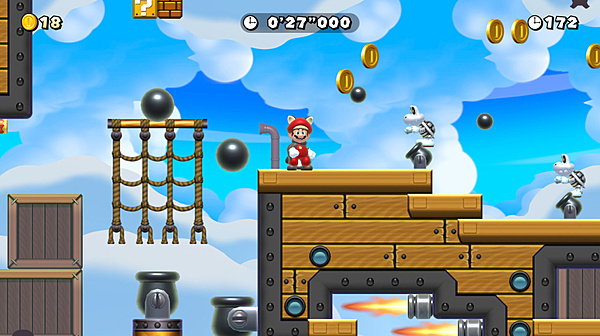 In this stage, the goal is to grab yourself a Flying Squirrel suit and make your way from Airship to Airship as quickly as possible. Watch out for cannonballs, Dry Bones, and engine fire along the way!

Plans got shuffled just a bit
06 September, 2020 by rawmeatcowboy | Comments: 8 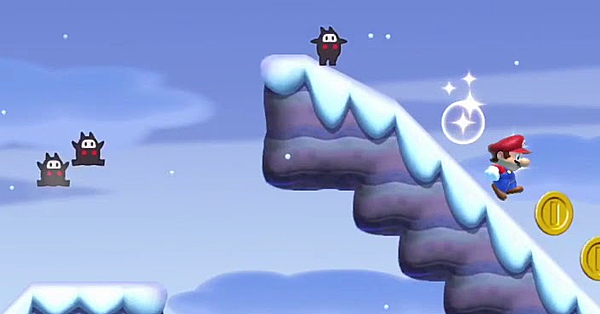 Among the various special events Nintendo announced for the Super Mario Bros. 35th anniversary was a new Ninji Speedrun for Super Mario Maker 2. The event will be 35th anniversary themed, and is coming to the game sometime in November 2020. That said, it seems Nintendo had plans to run this event much earlier.

People have gone snooping around the official Mario hub site that Nintendo put together, and they stumbled upon an info page for the Ninji Speedrun. The difference is, this page seems to be an old, unused page that Nintendo didn't think the public would find. The page lists the same Ninji Speedrun mentioned above, but it shows a release date of April 14th to 21st, 2020.

There's no doubt Nintendo hand planned to reveal a lot of their Mario 35th anniversary plans earlier in the year, but the pandemic through a monkey wrench into those plans. This defunct announcement page could show just how far Nintendo had to push some plans back.

Thanks to Wipeout Jack for the heads up!
Source: Link
Rating: 0

20 million courses have been uploaded in Super Mario Maker 2 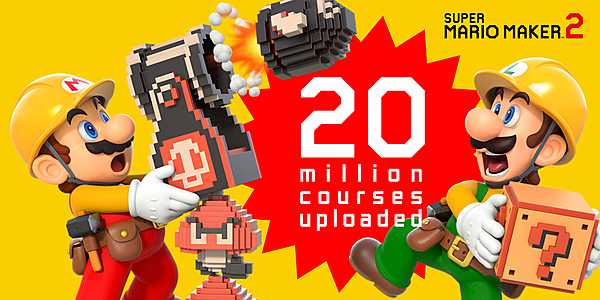 Nintendo of Europe has announced that 20 million courses have been uploaded to Course World in Super Mario Maker 2 on Nintendo Switch. That's well over a life-time of Mario levels! 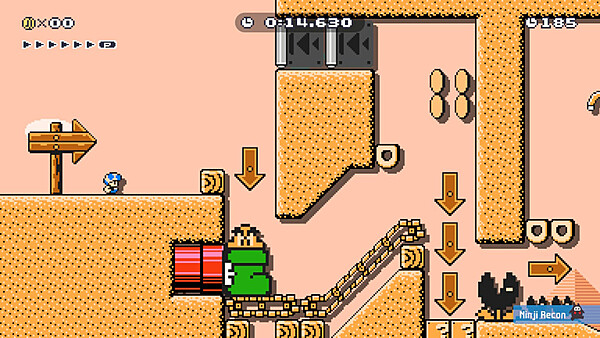 The 11th Ninji Speedrun is now available in Super Mario Maker 2. This one, entitled Big Shoes Gustin’ in the Desert, runs until Sept. 2nd, 2020.

In this stage, the goal is to grab a Big Shoe Goomba’s big shoe and race your way to the finish. You can use the Big Shoe to stomp out multiple foes, clearing the path to the exit.

Get yourself a special set of Ninji clothes!
05 August, 2020 by rawmeatcowboy | Comments: 0 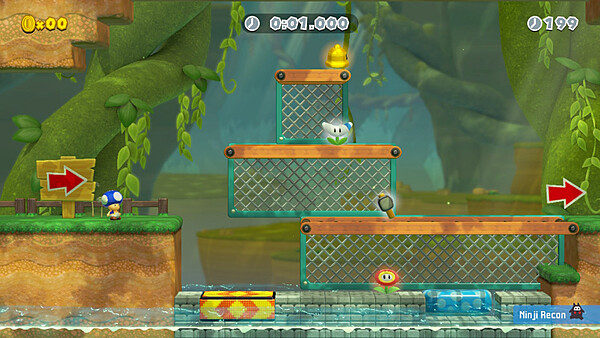 The next Ninji Speedrun for Super Mario Maker 2 is now available. In Player’s Choice: Power-Up Party, players must pick from one of four available items, and then start running. You can switch power-ups as you go, which will provide you multiple ways complete the course!

This happens to be the 10th Ninji Speedrun course so far, and if you've cleared all 10 courses, you can get a set of Ninji’s clothes! Player’s Choice: Power-Up Party runs until August 12th, 2020, and the 11th Ninji Speedrun will kick off August 26th, 2020.

The Domino King is back at it again, this time with a tribute to Super Mario Maker 2. This latest tribute uses over 260k dominoes to put together quite the spectacle. Hours in the making and over in a flash, but at least we can watch the video over and over! 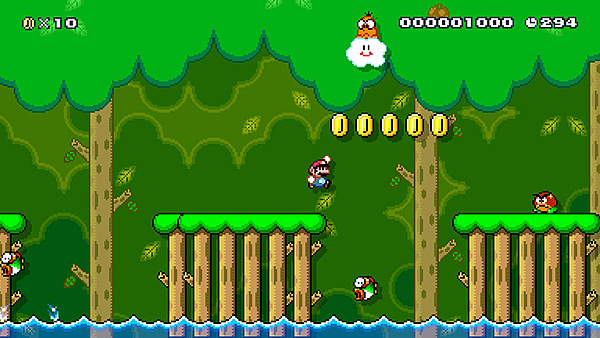 Super Mario Maker 2 has been updated to Version 3.0.1. Check out the full patch notes below.

If you display the pause menu while playing "Hack'n Time Attack", you can no longer operate the player for a certain period of time after closing the pause menu.

We have fixed some issues to make the game play more comfortable.

Realize your full potential
25 May, 2020 by rawmeatcowboy | Comments: 0 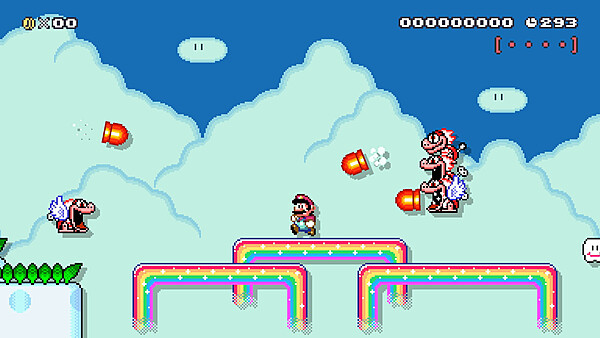 Well here we are, the final week of Nintendo UK's Super Mario Maker 2 design contest. For the last outing, Nintendo is opening up all restrictions. You can create a course with absolutely anything you like, and then submit your designs by sharing a tweet with the hashtags #SuperMarioMaker2 and #NintendoUK with the course ID. Each week's winner will receive a Super Mario goodie bag containing a Super Mario Cap, Super Mario Question Block Mug, Super Mario Lamp , Super Mario Hat Rubber 3D Keychain and Nintendo Switch Super Mario Analog Stick Caps, courtesy of the Nintendo Official UK Store.