Cadence of Hyrule: Crypt of the NecroDancer Feat. The Legend of Zelda "Season Pass" trailer

Take a look at what the Cadence of Hyrule: Crypt of the NecroDancer Featuring The Legend of Zelda Season Pass has to offer and keep the beat going with three DLC packs as they are released!

Nintendo released the second round of DLC for Cadence of Hyrule today, which is the Melody Pack. Check out the gameplay above to check out what some of the new tunes sound like!

The second DLC pack is now available for Cadence of Hyrule 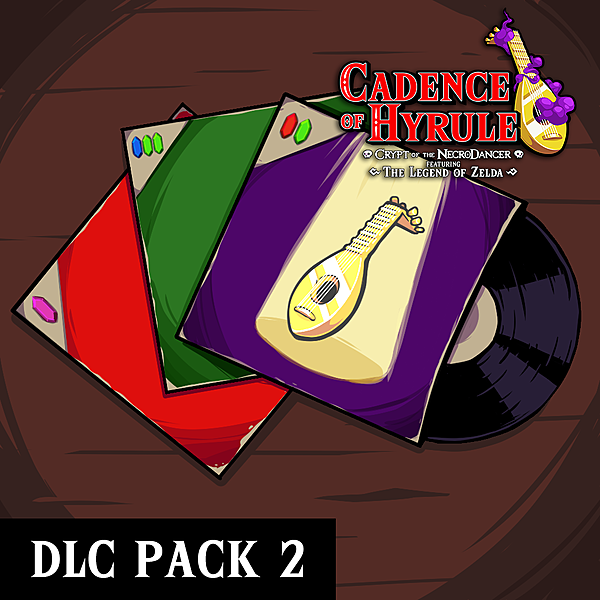 It’s time to re-orchestrate your adventure through Hyrule … the Melody Pack has arrived!

Have you battled your way through the rhythmic action-adventure Cadence of Hyrule: Crypt of the NecroDancer Featuring The Legend of Zelda game for the Nintendo Switch family of systems yet? The beat of the drum continues today with the Melody Pack DLC, which adds new songs to accompany you in battle.

This fresh DLC features 39 newly added songs and remixes for you to move and groove to, and these tracks can be changed at any time as you venture through Hyrule. Join Link, Zelda and an assortment of quirky characters as you adventure to the beat of newly added songs while exploring procedurally generated dungeons and a lively randomized overworld.

The Character Pack, available now, adds five additional characters to the game’s cast, such as Shadow Link and Shadow Zelda, as well as new modes to challenge players, including the All Character Mode with a 21-floor dungeon. Players can look forward to Symphony of the Mask, the game’s third DLC pack, which will introduce a new story and map featuring the mischief maker Skull Kid. The Character Pack and Melody Pack can also be purchased individually for $5.99 each in Nintendo eShop on Nintendo Switch. 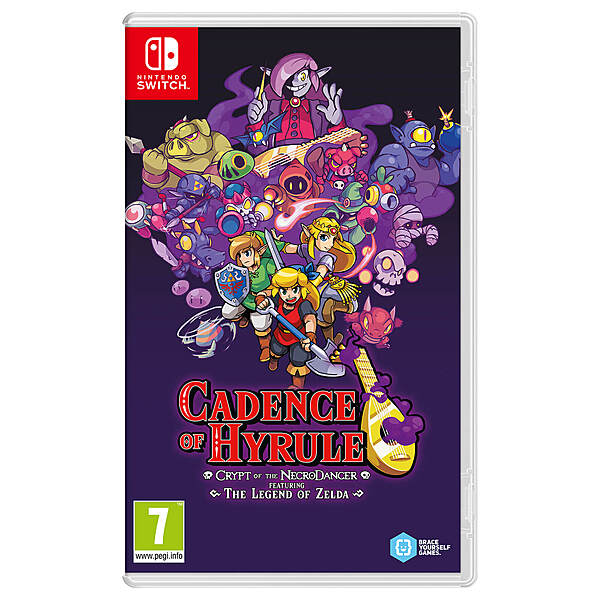 If you're looking to snag a physical copy of Cadence of Hyrule, there's a new option available today. The Nintendo UK Online Store has just added in the physical option for the game, which is priced at £34.99. No word on how many copies are around, so don't wait too long to snag yours!

Day-one stock for upcoming amiibo and Cadence of Hyrule detailed for France, restock of older amiibo coming as well 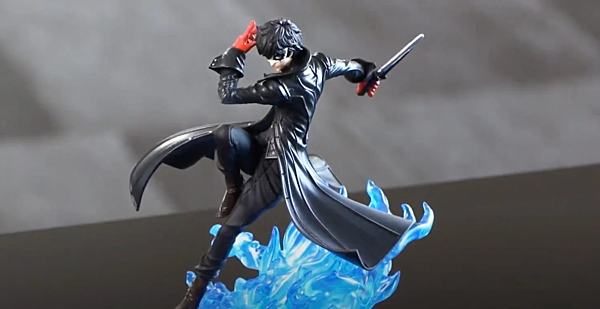 Wondering what stock will be like in France for the next wave of amiibo, as well as the physical release for Cadence of Hyrule? We've got those numbers for you, thanks to our friends at Nintend'Alerts. Here's the data on day-one stock for those items.

Along with that, we have word that some of the Super Mario, Splatoon, and Legend of Zelda amiibo are going to see restocks as well. As a matter of fact, some of the Zelda amiibo have already made their way to retailers. This restock seems to be France-only for the time being. 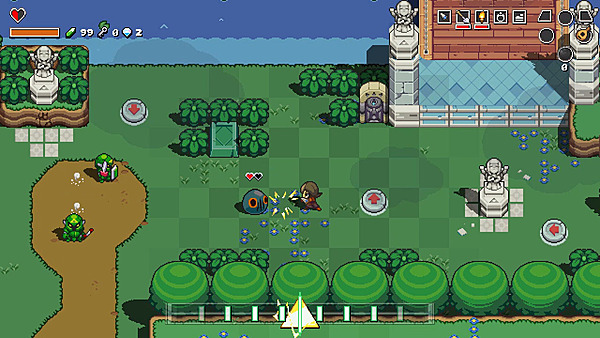 Cadence of Hyrule was updated a few days back, adding in support for 3 DLC packs, the first of which is available now. The update also included some other tweaks. Check out the full patch notes for the Version 1.2.0 update below.

Character DLC now available! Play through any game mode as Impa, Frederick (Shopkeeper), Aria, Shadow Link, or Shadow Zelda. Includes a new game mode: all characters mode, and 1 alternate outfit for each character (changeable at sheikah stones)
added a new game mode modifier: mystery mode
changed behaviour of some enemies to have them better avoid falling in holes
changed Octavo’s haste ability to be speed capped in the same way as peaceful area movement or fixed-beat movement
added portals to dungeon mode to allow the player to restart a zone from the boss area
added 2 extra weapons in dungeon mode, in zones 2 and 3
changed dungeon mode to not regenerate the dungeon after death when playing in seeded mode
added a display of the random seed to the post-game screen, and make it briefly visable after a quick-restart

fixed “bounce-cancelling”, an exploit that could allow the player to be stuck hovering at a specific height
fixed a bug/exploit involving using the inventory screen to cancel a bow or power glove action
fixed a bug where characters would continuously swap equipment if they picked up a new item while standing on a bridge or object
fixed a bug where the contents of certain objects (crates, bushes, etc) could be duplicated using the power glove
fixed a bug where “Quick Restart” in a co-op game would then start a new game in single player mode
fixed a bug in dungeon generation where bounce traps could be generated adjacent to doors
fixed a bug where picking up an item while sliding on ice could cause the player to slide too far
fixed a bug where using the hookshot and the “haste” ability could cause the step count to be incremented incorrectly
fixed an issue where helper characters in the Ganon battle could get stuck with glass weapons, and then lose their only available weapon after getting hit
fixed some bugs involving player movement around wind traps
fixed an issue where heart pieces could disappear if the player left the screen without picking them up
fixed some bugs relating to unusable items appearing for Yves
fixed an issue where Yves could unburrow inside certain larger enemies, causing them to get stuck
fixed a bug where the shrine of death could allow the player to skip Necrodancer phase 3
many other bug fixes

The Cadence of Hyrule season pass launched yesterday, and the first DLC pack is now available. It includes new characters such as Impa, Shadow Link, Shadow Zelda, Aria, & Fredrick. Check them out in action above!

Check out the Japanese cover art for Cadence of Hyrule 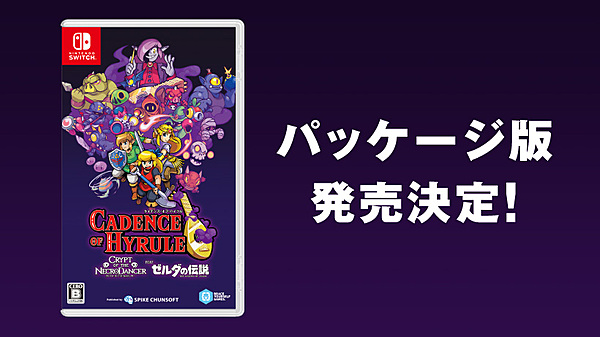 A physical version of Cadence of Hyrule was announced for worldwide release today. The package packs in all the upcoming DLC announced for the game, which includes character, song, and story DLC. The retail release in Japan is priced at ¥4,780 and will launch on Oct. 23rd, 2020.

Check out screens and art for Cadence of Hyrule's DLC, plus cover art for the upcoming retail release

Earlier today, Nintendo announced that three bits of DLC are coming to Cadence of Hyrule. Fans can get the character pack later today, and a song pack and story pack are coming sometime before Nov. 2020. The game is also getting a retail release on Oct. 23rd, 2020, which will include all DLC. Check out screens, art, and the cover art for that retail release in the gallery above!

A lot of changes behind the scenes
22 December, 2019 by rawmeatcowboy | Comments: 0 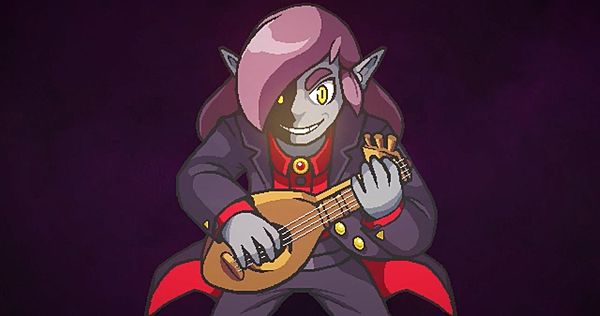 Cadence of Hyrule got some new content the other day, which came alongside a Version 1.1.0 update. Now we have the full patch notes for that update, which you can read below.

- Added Octavo as a playable character with unique story campaign, unlockable by completing the game once.
- Added Dungeon Mode, a mode for playing through the game in a new way, closer to the original NecroDancer experience
- Added shrines, mysterious objects that appear in dungeons, with unknown effects.
- Added some new level generation features, both in dungeons and the overworld.
- Added 4 new achievements relating to Octavo, dungeon mode, and shrines
- Adjusted the random distribution for spawning certain types of dungeon items, to better ensure seed consistency
- Allow the player to carry multiple copies of each scroll type
- Add UI for changing weapons of the helper characters during the Ganon fight
- Add display of the current world generation seed to the pause menu, so it can be recreated later in seeded mode
- Fixed some bugs where multiple dialogues/cutscenes could be activated at once, with unintended results
- Fixed a bug where Ganon could be defeated with a bomb during the between-phase cutscene
- Fixed a bug where getting hit by a bomb and using the hookshot on the same beat could cause the player to move incorrectly
- Fixed a bug where using the hookshot would add extra steps to the player's step count in fixed beat mode
- Fixed a bug where items could be duplicated by collecting them and moving between screens at the same time
- Fixed an exploit that allowed some bosses to be cheesed with projectiles from outside the boss arena
- many other bug fixes