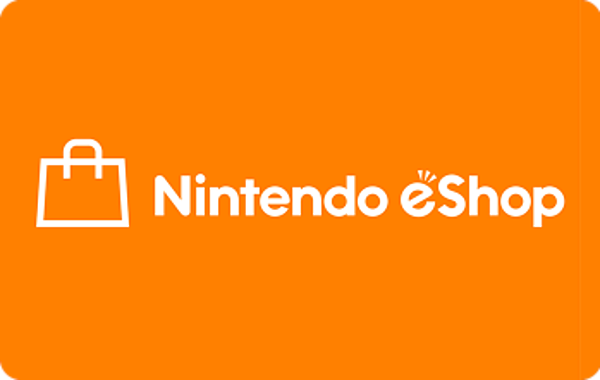 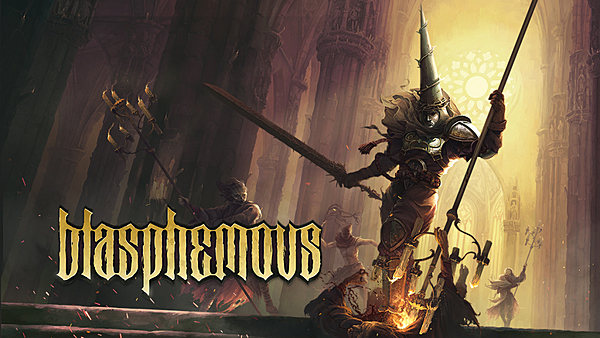 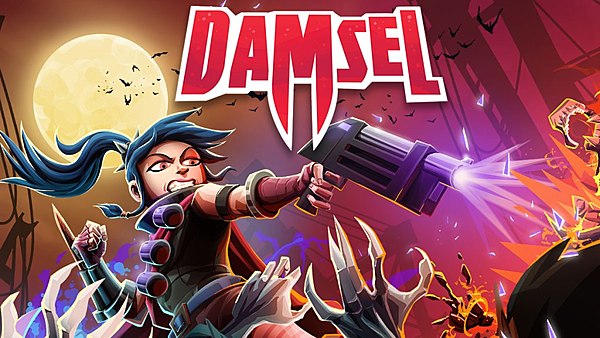 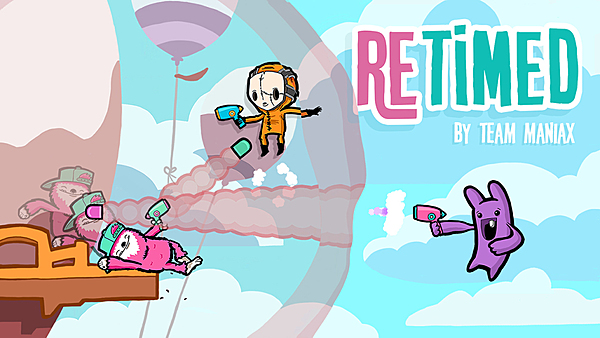 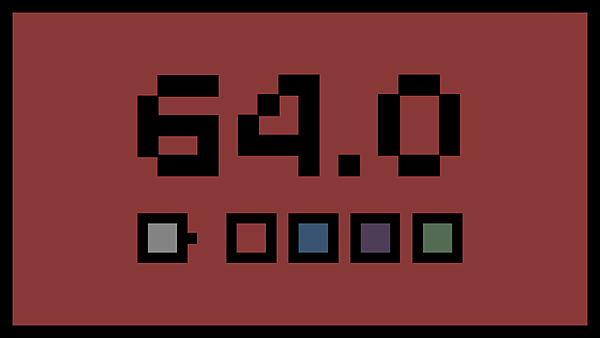 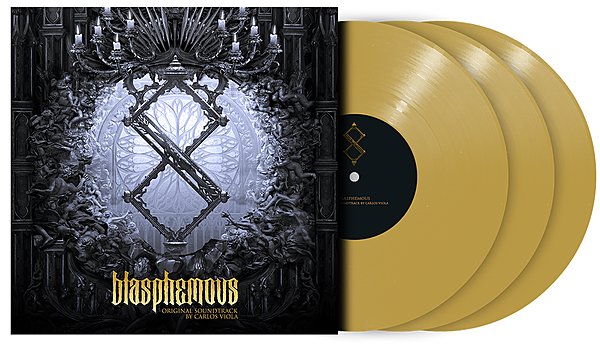 A triple-LP vinyl set for the Blasphemous soundtrack, featuring 27 songs composed by Carlos Viola. Region free. This is an open pre-order for a limited time!

This soundtrack is available to preorder through Limited Run Games for $45. Preorders close on Dec. 27th, 2019, so don't wait too long! 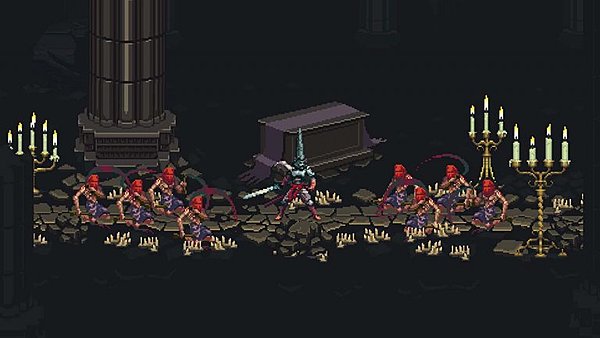 There's no doubt that Blasphemous falls into the Metroidvania genre, but the dev team behind the game wasn't satisfied with taking a paint-by-numbers approach to that tried-and-true layout. In an interview with Gamasutra, Enrique Colinet, the level designer on Blasphemous, explains how their team took things a bit future.

“I was pretty confident that people expected something similar to Castlevania. It looks like a Metroidvania game, so it had to feel like one. So, the problem was we were not really…comfortable or confident about the idea of opening areas with new abilities. Our intention was if you are the kind of player who likes to explore every corner of the map, then that’s fine, but we don’t want players to backtrack or explore areas if they don’t want to.”

Blasphemous getting a physical release courtesy of Limited Run Games

Our prayers have been answered
04 November, 2019 by rawmeatcowboy | Comments: 0 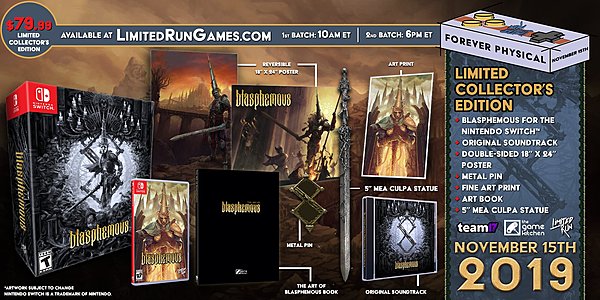 Team17 has announced that they're partnering with Limited Run Games to put out a physical version of Blasphemous. The game will see both standard and collector's releases, which the collector's edition including the game, the original soundtrack, a double-sided poster, metal pin, fine art print, artbook, and a 5-inch Mea Culpa statue. Preorders for both versions open on Nov. 15th, 2019.

While thie update is for Blasphemous, it's anything but blasphemous
18 October, 2019 by nintendojam | Comments: 0 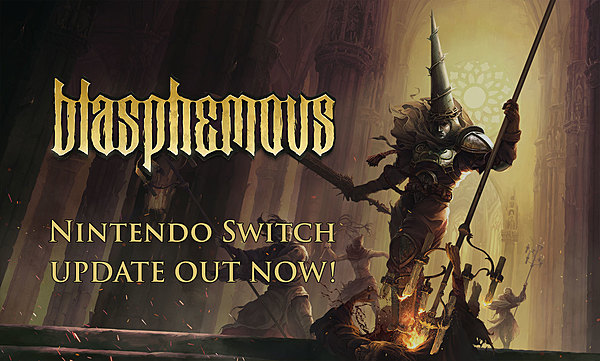 Team17 has announced an update for the Nintendo Switch version of Blasphemous. The biggest inclusion in the update is the addition of Russian and Portuguese language support. Check out the full patch notes below! 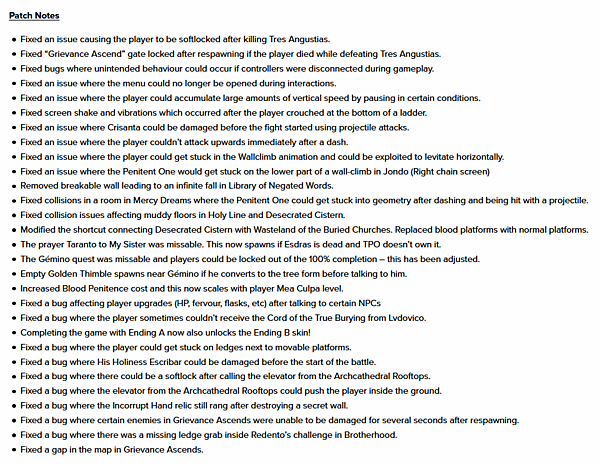 Blasphemous Accolades Lie Within This Trailer

Blasphemous is a punishing action-platformer that combines the fast-paced, skilled combat of a hack-n-slash game with a deep and evocative narrative core, delivered through exploration of a huge universe comprised of non-linear levels.

Explore this nightmarish world of twisted religion and discover its many secrets hidden deep inside. Use devastating combos and brutal executions to smite the hordes of grotesque monsters and titanic bosses, who are all ready to rip your limbs off. Locate and equip relics, rosary beads and prayers that call on the powers of the heavens to aid you in your quest to break your eternal damnation.

Check out these tips for surviving the brutal, unforgiving world of Blasphemous.

Play as The Penitent One - a sole survivor of the massacre of the ‘Silent Sorrow’. Trapped in an endless cycle of death and rebirth, it’s down to you to free the world from this terrible fate and reach the origin of your anguish.

Blighted by a foul curse known as ‘The Miracle’ and inhabited by twisted monsters and unforgiving bosses, Cvstodia’s only hope for redemption rests with ‘The Penitent One’, the sole survivor of the ‘Silent Sorrow’ massacre. As ‘The Penitent One’ players will enter a nightmarish cycle of death and rebirth where suffering and failure are only temporary obstacles. ‘The Penitent One’s sword, the Mea Culpa, will become a true force to be reckoned with; cutting its way through a seemingly never-ending horde of enemies and increasingly tougher bosses with brutal force.

“Today’s launch of Blasphemous is a real milestone for The Game Kitchen, it’s a game that has been a labour of love for everybody involved in its development. The journey of ‘The Penitent One’ through Cvstodia is a hardcore, unforgiving experience, and we hope that players will really immerse themselves in the game’s twisted and nightmarish world. We believe Blasphemous delivers a new and exciting experience for fans of the Metroidvania genre. We’re excited to bring the history and folklore of southern Spain to players and we can’t wait to see how the community reacts to the dark, gothic world the studio has created out of that inspiration.”

Throughout the adventure, players will interact with tortured souls looking for an end to their torment, uncover their stories, gain rewards, and unlock buffs, special attacks, and other customisation to help steady the unrelenting resolve of ‘The Penitent One’.