Goonya Fighter has been updated with a series of characters from Virtua Fighter. Fans of the SEGA fighting franchise can now download Pai Chan, Akira Yuki, Sarah Bryant, Lau Chan, and Wolf Hawkfield, which are priced at ¥100 each. Obviously, you'll also need the base Goonya Fighter game to access this content as well.

New details on the SEGA collab
25 September, 2020 by rawmeatcowboy | Comments: 0

A few weeks back, it was revealed that Goonya Fighter is going to receive some Virtua Fighter collaboration DLC. Now a few more details about that DLC have come to light.

Five Virtua Fighters will make their way to Goonya Fighter this Fall. The lineup includes Pai Chan, Akira Yuki, Sarah Bryant, Lau Chan, and Wolf Hawkfield. You can see the designs of the classic characters above, as well as the voice actors who will be handling dialog. 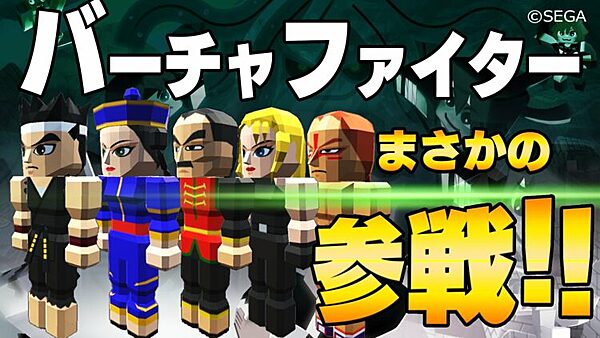 The 4-person fighting game Goonya Fighter has just revealed a pretty substantial collaboration with SEGA. Virtua Fighter skins for Akira Yuki, Pai Chan, Lau Chan, Sarah Bryant, and Wolf Hawkfield are making their way to the game, but no specific date for the collaboration was given. While we wait, you can grab the base Goonya Fighter game right now for $25. 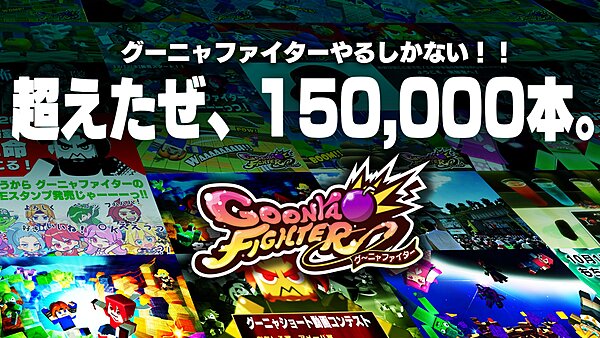 The developers of the Nintendo Switch exclusive party-fighting game "Goonya Fighters" are celebrating a new sales milestone! Having sold 150,000 copies since its release via the eShop on June 27, 2019, you can check out their tweet thanking the supporters here. 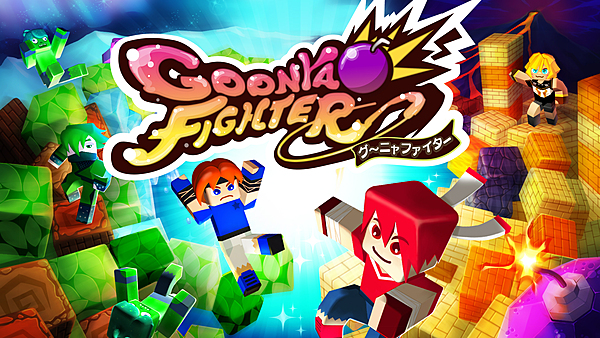 Available to download via the Nintendo eShop, our highly praised multiplayer party-fighting game Goonya Fighter launches its 1-Year Anniversary Sale with a discount of over 95%. Plus, we announce the launch of our new DLC character Glyph!

What is Goonya Fighter?
A flippy floppy party-fighting game.
Simple to master, supports up to 4 players.
With over 90 stages, 3 battle styles and a hefty bag of tricks, the fun is endless!

■ 1-Year Anniversary Sale!! 95+% off!
With high praise from various sectors, Goonya Fighter for download on the
Nintendo Switch welcomes its first anniversary since release!!

Within this time we have developed an extensive fan base alongside expanding the Goonya Fighter world with DLC items, GIFs and stamps for social media, an original soundtrack and new battle styles via laboratory mode. It has been a blessing to see gamers enjoy themselves while playing our game over the course of this year.

As thanks for a successful year, we are holding a sale to celebrate our first anniversary since release of the game, with a discount of over 95%.
We look forward to welcoming new fans to the fold.

■ Important: Bug fixes
Alongside the new DLC, we have added the following patches. Please download the latest version in order to continue enjoying Goonya Fighter.

Fixed a bug in the Bomber Fighter Insanity DLC that caused the game to crash under certain conditions.

Goonya Fighter now over 95% off for a limited time, new DLC available 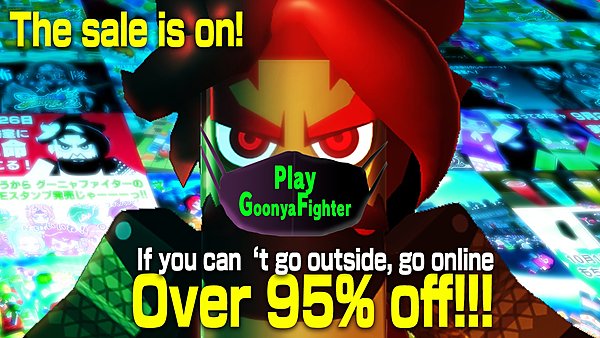 Available to download via the Nintendo eShop, our highly-praised, multiplayer party-fighting game Goonya Fighter begins its 90%+ off “Stay-At-Home Sale”! Plus, more DLC for you to get your hands on!

A flippy floppy party-fighting game.
Simple to master, supports up to 4 players.
With over 90 stages, 3 battle styles and a hefty bag of tricks, the fun is endless!

■For those sheltering at home, this sale is for you! Over 90% off!

With high praise from various sectors, Goonya Fighter for the Nintendo Switch is available for download and currently on sale at over 90% discount.

Which makes it less than a burger --- And will keep you at home for longer too!
The sale period lasts until May 6th (Wed) for North America, and May 12th (Tues) for Europe/Australia.

With Goonya Fighter, you can still play together with friends and family. No time like the present to hunker down and have some Goonya fun!

Scheduled for the end of April, more DLC will become available. This includes a new character, based on designs submitted by twitter fans, and more battle rules!

Additional battle rules:
Be one with the Joycon! Controller Motion Battle!!

Be one with the Joycon! Controller Motion Battle!! will be the last new battle style available for the laboratory mode.
It will continue to be available until April 24th (Fri), so enjoy it while it lasts.
After the 24th, we will be repeating past laboratory battles for anyone who happened to miss out. If you can’t wait though, you can always purchase your favourites as DLC.

Although there won’t be anything from the Laboratory for the time being, we at MUTAN Inc. are still scheming away, devising fun things for the future! We look forward to your continued support.

Alongside the new DLC, we have added the following patches.
Please download the latest version in order to continue enjoying Goonya Fighter.
◆Fixed a bug where some players were penalised if another player disconnected.
◆Characters will now be respawned if an abnormality is detected.
◆Fixed a bug that sometimes caused errors in victory status. 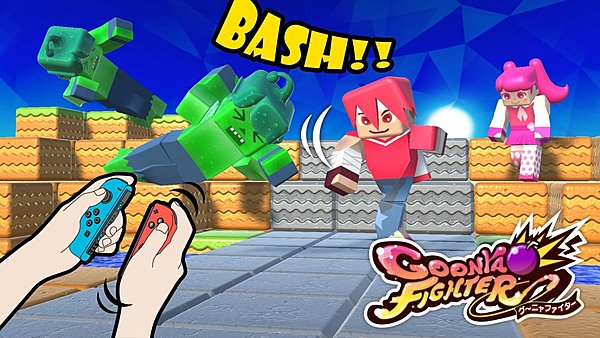 MUTAN has added yet another experimental battle to Goonya Fighter. This 15th experimental battle will be running until April 24th, 2020. The theme this time around is “Be one with the Joy-Con! Controller Motion Battle!!,” which will add in motion control support.

Along with this new battle, the game has been updated to version 1.1.2. The update adds in two Additional Rules DLC (“First-Aid Boxes and some TLC” and “Super Untouchable Goonya Fighters”), both of which are priced at ¥70. 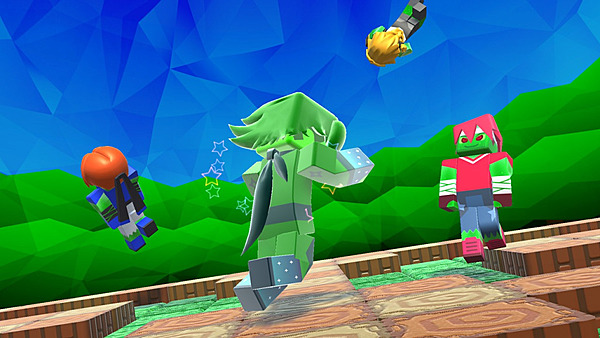 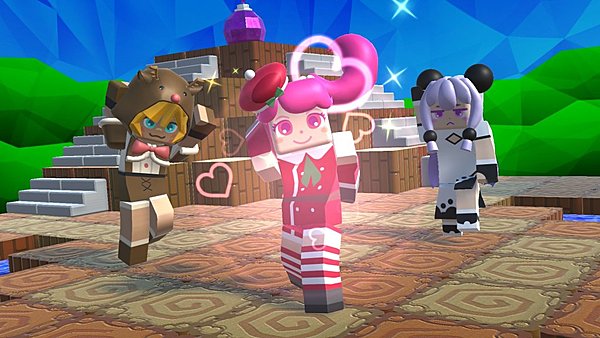 MUTAN has added the 13th experimental battle to the Goonya Fighter Laboratory, which will be sticking around until March 27th, 2020. The research theme this time around is “First-Aid Boxes and some TLC,” which will have more heart recovery items available. Two Additional Rules DLC (“Bomber Fighter Insanity!” and “Running On Fumes?! Natural Jet Propulsion Battle!”) are also available, priced at ¥70 each. 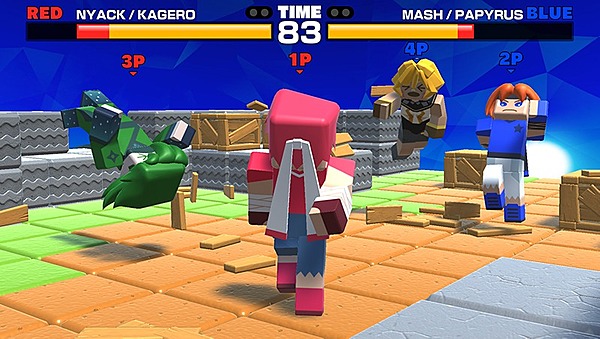 MUTAN has added yet another experimental battle to Goonya Fighter. The theme this time around is “The New Sensation: A View From Behind!,” and features a camera set behind the player’s shoulder. This experimental battle will be around until Jan. 31st, 2020.

Along with the new battle, Goonya Fighter has been updated to Version 1.0.9. No specifics on this update were shared.