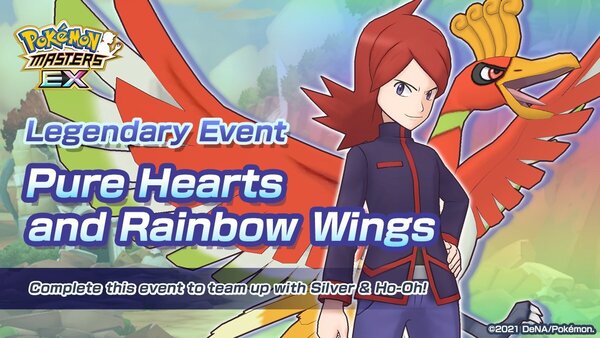 A whole bunch of special events are on their way to Pokemon Masters EX to tie in with the Hoenn region. Some of this has been detailed already, but now we have a complete lineup for January, along with some early February content. Check it all out below.

New Event - Team Hoenn Unite! (available now - Jan 31): In this event, Trainers May and Brendan form an all-star team made up of Trainers from the Hoenn region. Players who participate in the event will earn in-game rewards that can be exchanged for various power-ups. This event is available to players who have completed Chapter 1 of the Main Story.

· New Sync Pair - May & Mudkip (available now - Jan 31): This Water-type sync pair is available in the sync pair spotlight scout, and can deploy moves like Rain Dance, which causes rain to fall onto the battlefield.

· Legendary Arena - Entei Returns (available now - Jan 27): Using only a limited number of sync pairs, in this event players can battle against the extremely powerful Legendary Pokémon Entei. This event is available to players who have completed Chapter 2 of the Main Story.

· Legendary Event - Ho-Oh Returns (available now - Feb 7): In this event, players will embark on an adventure with Trainers Silver and Ethan of the Johto region to learn more about why Ho-Oh has come to the island of Pasio. Players who complete the Legendary Event will have the sync pair of Silver & Ho-Oh join their teams. This event is available to players who have completed Chapter 1 of the Main Story. 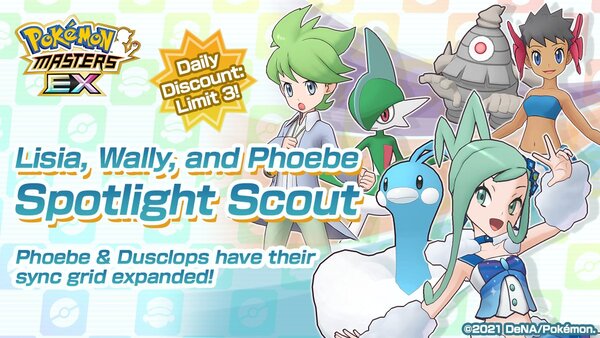 [Update] The upcoming Software update for Pokémon Masters EX is Ver. 2.6.0 and will be available in late February 2021. The update includes the following changes.

Sync Grid Update
- A multiple-selection feature for the sync grid.
- A preset feature, which will allow you to save multiple grids with unlocked tiles to be applied right away.
- A feature that will allow co-op sync orbs to be used without converting them to sync orbs.
- Coin-free sync grid resetting.
- A feature to reset tiles individually.
- An additional display for tiles that have move level requirements.
- Pinch-to-zoom functionality.

[Events] The Legendary Arena feat. Entei is now back (available until January 28th)

[Store] The following Packs are now available in the Store: January event gem special 1 to 3 (available until January 29th) 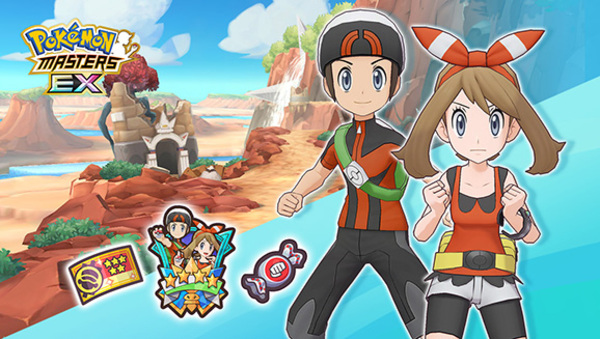 Pokemon Masters EX has gotten yet another update, and a new solo event is now available. Read full details on what's included below.

Even while visiting the island of Pasio, some Pokémon Trainers know that there's no place like Hoenn—and now those Trainers are coming together for Pokémon Masters EX's Team Hoenn Unite! event. This solo event will run from Wednesday, January 13, 2021, at 10:00 p.m. PST to Sunday, January 31, 2021, at 9:59 p.m. PST. During this time, you can complete special missions to participate in a new story event starring Trainers from Hoenn. There will also be exclusive medals you can earn by completing certain missions, and you'll be able to get 5★-Guaranteed Scout Tickets and more from the item exchange!

Pokemon Masters EX - In celebration of the Hoenn Unite event, a May & Mudkip Sync Pair will be available on January 14th

Serebii Update: The Team Hoenn Unite event which adds the Sync Pair of May & Mudkip to the game has been announced for Pokémon Masters EX. Details @ https://t.co/gDbXkHSvkT pic.twitter.com/gbdQH7McCZ

A new event has started in Pokemon Masters EX. The game shall be hosting the "Hoenn Unite Event," which is an event focused on characters from Pokemon Sapphire, Ruby, and Emerald. Starting January 14th, players can receive a Sync Pair of May and Mudkip. 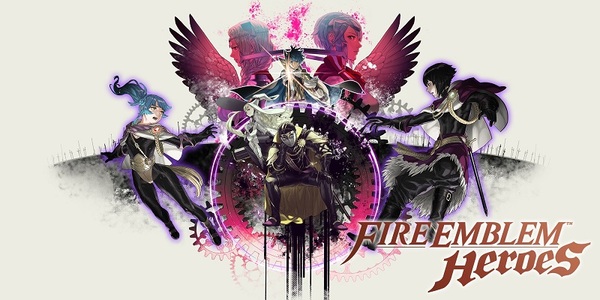 [Missions] While the latest Egg Event is running, there’s a set of Special Missions for you to tackle (available until January 21st) 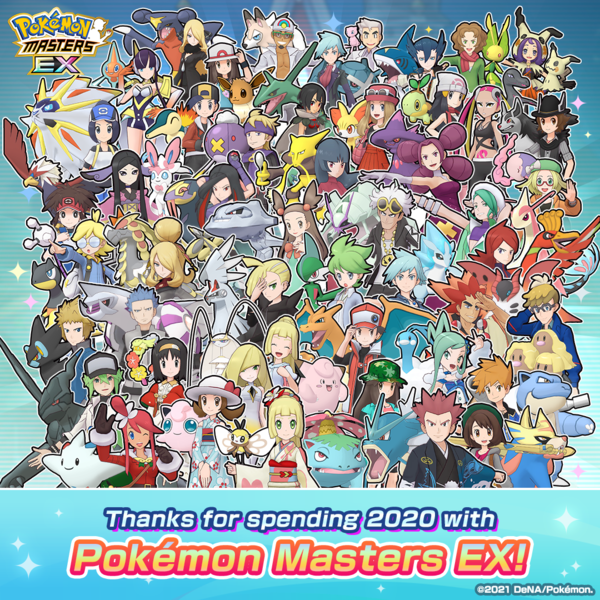 2021 just kicked off a few days ago, and Pokemon Masters EX is celebrating the new year with a wealth of new content. A host of sync pairs and events tied to 2021 are available now, and you can get the full details in the press release below.

DeNA Co., Ltd., in partnership with The Pokémon Company, is ringing in the New Year by announcing various themed content updates for Pokémon Masters EX. DeNA also revealed a banner that highlights many of the 50 sync pairs added to the game in 2020, celebrating a year of growth and accomplishments together with its community.

Players will be able to add New Years-inspired versions of Lillie & Ribombee and Lance & Gyarados to their teams via the sync pair spotlight scout, available now until January 13, 2021 at 9:59 p.m. Pacific Time. The Bug-type sync pair of Lillie & Ribombee can deploy moves like Alola Lang Syne!, which raises the evasiveness of all allied sync pairs while blocking status conditions. The Flying-type sync pair of Lance & Gyarados can unleash moves like Hyper Beam, which deals extraordinary damage at the cost of four (out of six) bars of the move gauge. Both sync pairs can reach a 6★ EX Potential rating, which increases the strength of their sync moves and provides them with an additional New Years-inspired outfit to wear.

An in-game story event titled “Season’s Greetings” is also available now until January 13, 2021 at 9:59 p.m. Pacific Time for players who have completed Chapter 1 of the Main Story. This event features Lillie and Lance in their New Year’s outfits as they work together to deliver New Year’s cards to various Trainers on Pasio, such as Blue, Silver, and Clair.

• Champion Stadium – Johto Challenge: Opponents in the Champion Stadium game mode will now be from the Johto region, allowing players to take on Will, Koga, Bruno and Karen of the Johto Elite Four, as well as the Johto Champion, Lance. The true challenge of this game mode lies in having to defeat them all in five consecutive battles with a limited number of sync pairs. Once a sync pair has participated in a battle, it cannot battle again while the challenge is underway, making it crucial for players to have an arsenal of powerful sync pairs. The Champion Stadium is available now until January 31, 2021 at 9:59 p.m. Pacific Time for players who have completed Chapter 10 of the Main Story. In the future, Elite Four members and Champions from other regions of the Pokémon world will also come to the Champion Stadium.

• Electric and Steel-Type Egg Event: This event lets players earn Pokémon Eggs, which can be hatched into Electric and Steel-Type Pokémon such as Pichu, Elekid, and Magnemite. All Pokémon hatched from Eggs can be paired with the game’s Main Character to battle alongside one another. This event will be available from January 6, 2021 at 11:00 p.m. Pacific Time until January 20, 2021 at 10:59 p.m. Pacific Time for players who have completed Chapter 1 of the Main Story.

Players can check the in-game menus for more information. Note that in-game event dates are subject to change without notice. 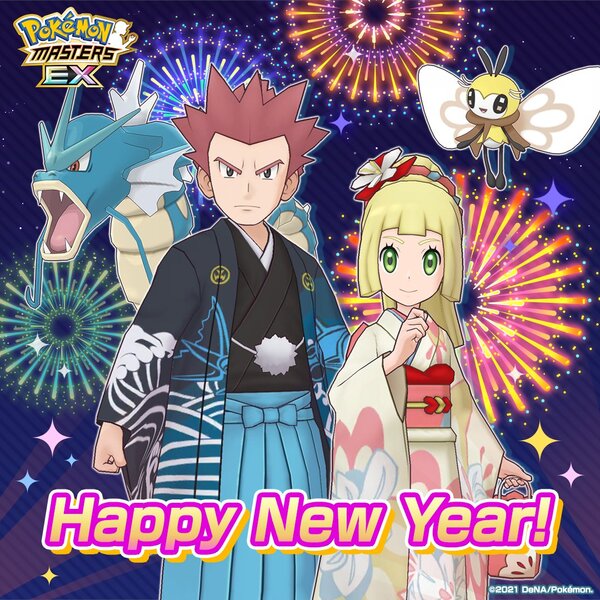 [Missions] While the latest Story Event is running, a set of Special Missions is available for you to tackle (available until January 14th)

[Missions] As part of the Happy New Year Rally, a set of special Missions is available for you to tackle (available until January 14th)

[Events] To celebrate New Year, the Pokémon Center is getting a makeover! (available until January 14th)

Pokemon Masters EX players have some fun stuff to look forward to in the near future. An update is live right now that includes some bug fixes, but it also features preparations for the following features.

Poke around this new update!
10 December, 2020 by rawmeatcowboy | Comments: 0 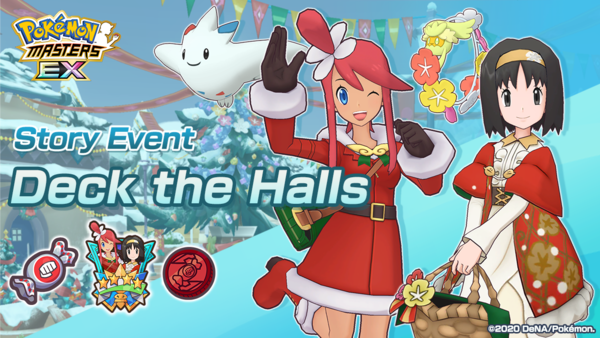 Pokemon Masters EX is ready to celebrate the holidays with some new updates and tweaks. Get a full breakdown of the holiday update below.

The Fairy-type sync pair of Erika & Comfey can deploy moves like Lei Up!, which restores all of your allies’ HP. The Flying-type sync pair of Skyla & Togekiss can unleash moves like Tri-Attack, which has a high probability of leaving the opponent Paralyzed, Burned, or Frozen. Both sync pairs can reach a 6★ EX Potential rating, which increases the strength of their sync moves and provides them with an additional festive outfit to wear.

An in-game story event titled “Deck the Halls” is available now until December 31 at 9:59 p.m. Pacific Time for players who have completed Chapter 1 of the Main Story. This event features Erika and Skyla in their festive attire as they work together to decorate a large tree and bring joy to the island of Pasio.

The Pokémon Center has also been re-decorated for the holiday season and is accompanied with new background music. To commemorate the holidays, players who login daily from now until December 31 at 9:59 p.m. Pacific Time can earn up to 1,000 Gems.

Legendary Arena – Regirock: In this event, players battle against the extremely powerful Legendary Pokémon Regirock, using only a limited number of sync pairs. This event is available now until December 20 at 9:59 p.m. Pacific Time for players who have completed Chapter 2 of the Main Story.

Serebii Update: The Deck the Halls event has been announced for Pokémon Masters EX. Adds two Holiday Sync Pairs of Skyla and Erika to the game. Details @ https://t.co/gDbXkHSvkT pic.twitter.com/BZewS8jXJU