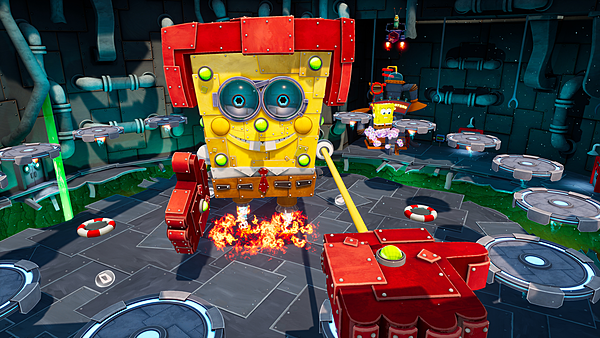 THQ Nordic has revealed that a patch is being worked on for SpongeBob SquarePants: Battle for Bikini Bottom - Rehydrated. THQ Nordic is hoping to have this release on Switch sometime in the next 10 days. When it goes live, we'll be sure to let you know. For now, check out the patch notes below. 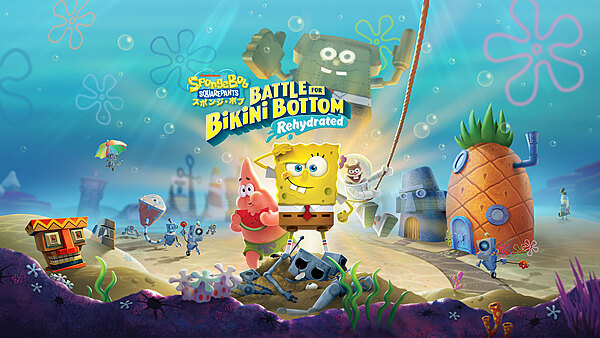 SpongeBob SquarePants: Battle for Bikini Bottom – Rehydrated was originally slated to hit the Switch in Japan on Aug. 4th, 2020, but THQ Nordic ended up delaying the game at the last minute. While no explanation of the delay was given, we thankfully know the new release date.

THQ Nordic has confirmed that SpongeBob SquarePants: Battle for Bikini Bottom – Rehydrated will launch in Japan on Aug. 20th, 2020. This includes both the retail and digital release. 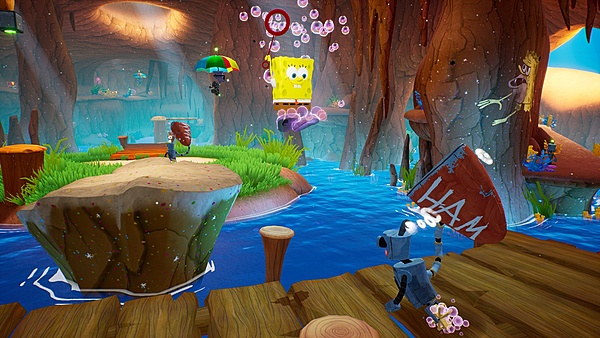 THQ Nordic has announced that SpongeBob SquarePants: Battle for Bikini Bottom – Rehydrated is now delayed in Japan. The original plan was to have the game launch on August 4th, 2020, but that's no longer the case. THQ Nordic did not share a new date, nor did they explain the delay. 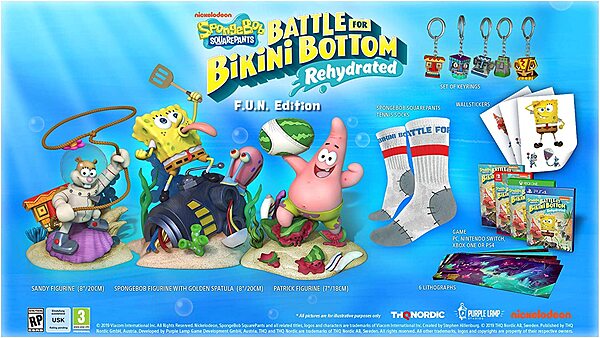 Spongebob Squarepants: Battle for Bikini Bottom - Rehydrated hasn't been out for too long, but the special editions of the games are already seeing some deep discounts on Amazon.

In this glitch packed episode we check out the buggier side of Spongebob Battle For Bikini Bottom Rehydrated, the remake of a beloved classic. Frankly, the game became more and more broken during the making of this, so may have to revisit it, and of course, the original! 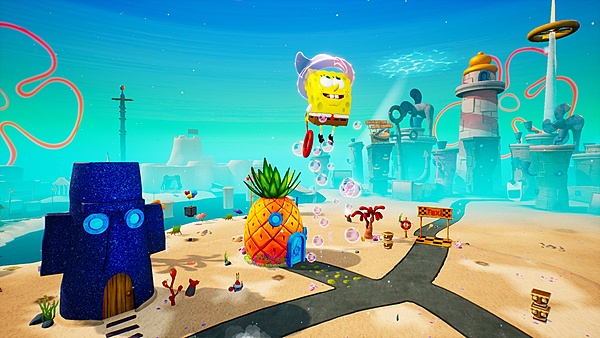 It appears that THQ has released a new update for SpongeBob SquarePants: Battle for Bikini Bottom - Rehydrated on Switch. Unfortunately, we don't have a version number or patch notes. We do have comments from those who have updated their game, and it seems the resolution might have gotten a bump. That goes for both handheld and docked. Hopefully we'll get full patch notes soon, which we'll make sure to add to this post.

Three weeks ago, we released SpongeBob SquarePants: Battle for Bikini Bottom - Rehydrated and not only did the game get (mostly) spongetastic reviews from press and critics, the community feedback was better than we could have hoped for!

On the day that Spongebob SquarePants: Battle for Bikini Bottom Rehydrated released, speedrunners had already figured out a way to bypass almost everything in the game and skip straight to the end. Watch as Michael Hartinger (Project Manager, Purple Lamp Studios) and Martin Kreuch (Producer, THQ Nordic) witness this very feat happen right before their eyes. But a two-minute video is no fun, so we also had them watch a full any% speedrun right after. 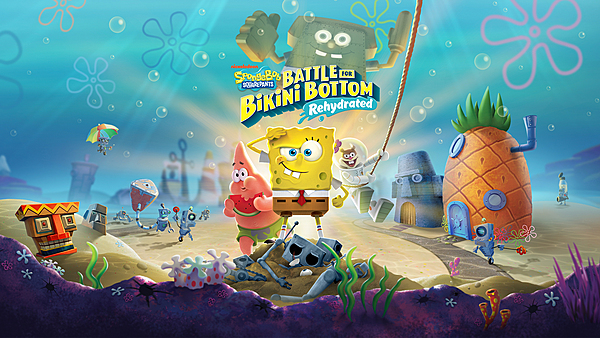 While it doesn't make for the best day ever, SpongeBob SquarePants: Battle For Bikini Bottom - Rehydrated serves up plenty of smiles with hours of F.U.N. and imagination.

Growing up playing many video games based on Nickelodeon's most iconic franchise SpongeBob SquarePants, I was excited to hear that THQ Nordic was publishing a remaster from developer Purple Lamp Studios. Not only is Battle for Bikini Bottom widely considered to be the best in the SpongeBob series of games, but also the best licensed title in general. Games based on previously established IPs from film or television tend to be nothing more than shameless cash-grabs, but this one in particular is truly something special.

Surprisingly, the original Battle for Bikini Bottom was one of the few SpongeBob releases I didn't play during the 6th console generation. Most of my time was spent on prior point-and-click adventure titles on PC like "Operation Krabby Patty" (2001) and "Employee of the Month" (2002), but I also dived into some other BFBB-like 3D platformers on GameCube like "Revenge of the Flying Dutchman" (2002) and "The SpongeBob SquarePants Movie" (2004). While the 2003 release of Battle for Bikini Bottom completely flew past my radar (taking away any nostalgia that I could have had for the remaster), I'm glad that almost 20 years later I finally got to experience a rehydrated version of what everyone has been so bubbly about. 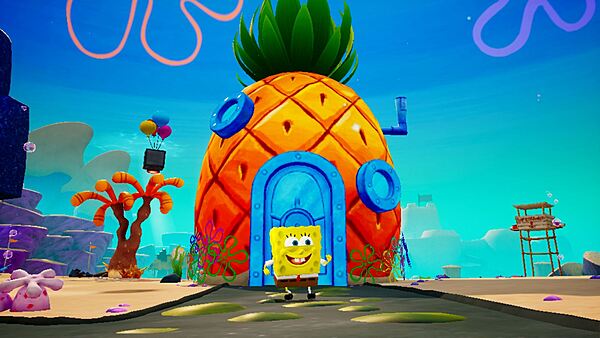 Battle for Bikini Bottom Rehydrated is a very faithful remaster built from the seabed up in Unreal Engine 4. Most of the original’s gameplay mechanics and level design remain untouched, with the biggest difference being a gorgeous new coat of paint. While this is mostly a good thing, certain issues from the original (such as Clancy Brown not voicing Mr. Krabs) are still disappointingly present.

The art-style is now much more reminiscent of modern SpongeBob, and while some may see that as a negative due to growing up with the original, it definitely adds much more color, expressiveness, and overall life to the undersea world. Many references from the first two seasons of the cartoon can be found in both the original game and the remaster, with nods to the later seasons added exclusively for Rehydrated. Recent internet memes like “Surprised Patrick” and “Mocking SpongeBob” can be viewed through idle animations, and you can even catch an NPF (non-player fish) dabbing if you pay attention to him long enough. 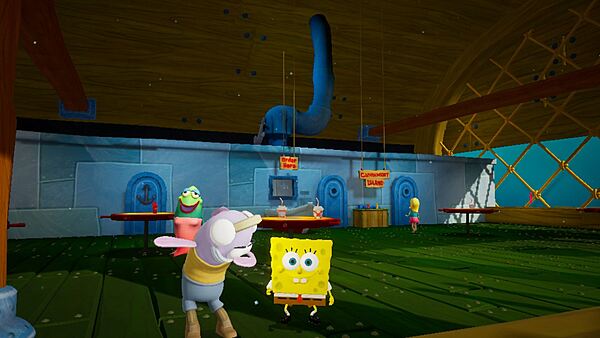 The Switch version of the game has plenty of undeniable issues, most of which are based on the console’s limited hardware and/or poor optimization. Throughout my playthrough, I experienced no less than 3 random soft-locks, blacking out my screen, leaving only the UI and pause menu functional. You’ll likely come across plenty of other slightly annoying issues, including but not limited to; slow and frequent load times, occasionally blurry and illegible graphics due to dynamic effect resolution, over-pixelated shadows, and very unstable framerate. Portability is definitely the main selling-point for purchasing the title on Switch, as it can’t really compete with other platforms graphically or technically. In handheld-mode, the game looks beautiful on the Switch’s 6.2-inch LCD screen, but If you plan to play mostly in TV-mode, I’d recommend considering another system for your spongy adventure. 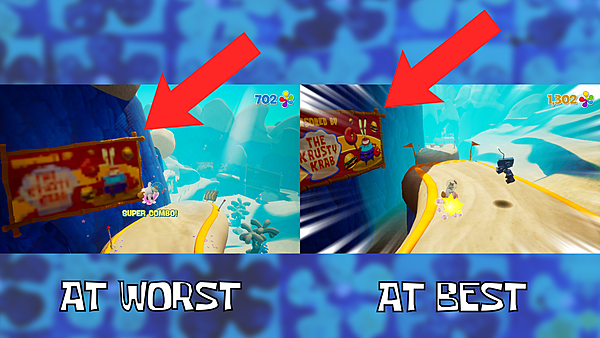 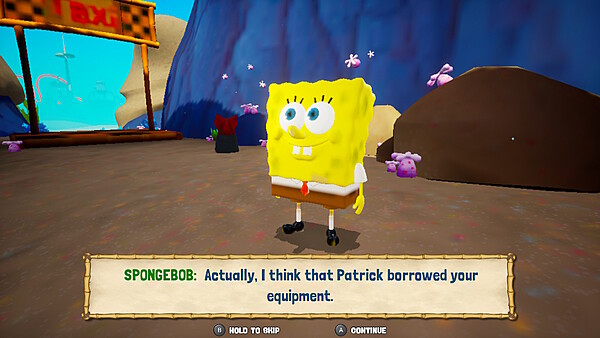 Taking about 10-20 hours to 100% complete, Battle for Bikini Bottom is pure joy for fans of the 3D platformer collectathon genre. 100 Golden Spatulas (the main objectives) and 80 of Patrick’s lost socks are scattered across 10 main worlds and 3 boss battles, all based on iconic and memorable locations/characters from the show. Plankton's army of rogue robots have run amok, and your goal is to stop their antics with good ol' cartoon violence! Most of the game could easily be played by younger fans of the long-running cartoon, but some challenges certainly aren’t for bubble-blowing babies. Many of Patrick’s socks are actually really well-hidden, and platforming in the latter half of the game sometimes requires quite a bit of precision.

SpongeBob, Patrick, and Sandy all control as smooth as Jellyfish Jelly (Jellyfish Jelly is smooth, right?), each with a unique moveset designed to tackle different tasks. Sandy uses her lasso for long distance hovering, swinging, and attacks, Patrick can carry and throw objects such as watermelon (which is useful for solving most of the puzzles), and SpongeBob can gradually unlock special moves like; the Cruise Bubble (a controllable missile), Bubble Bowl ("Bowl-o-rama!"), Sponge Bowl (turning yourself into a bowling ball) ,and Wedgie Dive (allowing for bungee jumping from various hooks). The characters can be swapped between upon finding a bus stop, but only the heroes needed for the specific area are available for use. 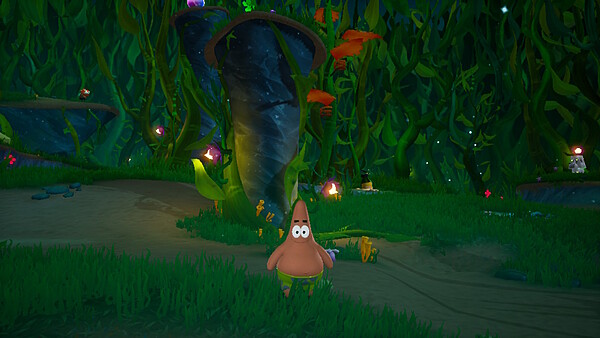 Dialogue for the character interactions, main story, and cutscenes is very reminiscent of the writing in episodes from the show. The jokes are witty, silly, and plentiful, with even some adult humor thrown in too. Most of the voice acting is spot-on due to the cartoon's returning cast, but hearing Mr. Krabs' and Mermaid Man's poor impersonators does take away from some of the immersion. You can expect SpongeBob, Patrick, and Sandy to give a comedic quip with every robot defeated and puzzle solved. While this can get pretty repetitive once cycled through, it isn't much worse than hearing "Wa! Wahoo! Weehee!" from the Super Mario games. 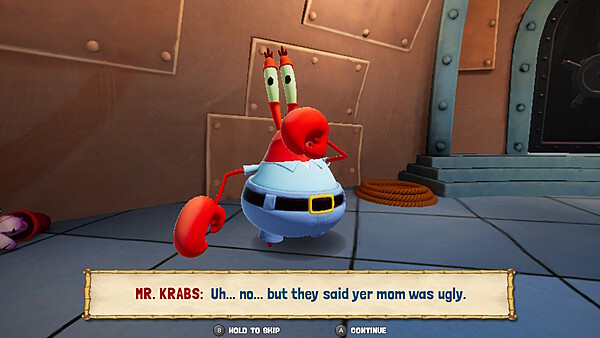 Battle for Bikini Bottom Rehydrated introduces the addition of co-op multiplayer, which is sadly nothing special and honestly quite disappointing. Taking only about 30 minutes to complete the single map that’s available, the Horde Mode-like experience feels like extra content thrown into the game at the last minute. Traveling from island to island defeating the waves of enemy robots is way too easy, and has practically zero value when compared to the main single-player campaign. Dying in this mode results in a respawn just a few seconds later, failing to provide any real challenge. I suppose the most entertaining aspect is competing with your friends (locally or online) to see who can defeat more robots and collect the most Shiny Objects, but even then, it gets old pretty quickly. 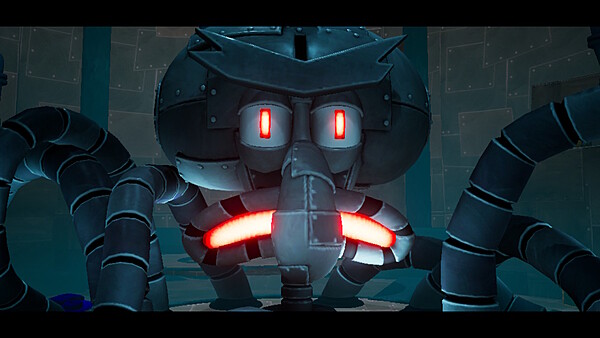 Playing online actually works quite well though, which was a nice surprise. Joining a random room was almost instantaneous, but the community of online players is expectedly filled with a younger audience with short attention spans. I carried every match I participated in, and half the time my teammate left the game before we even got to the end. It’s fun to play as Squidward, Mr. Krabs, Gary, and Plankton for the first time, but it’s a shame they’re exclusive to this admittedly mediocre mode. Hey though, It’s better than nothing.

Purple Lamp Studios really delivered on developing a fun and faithful remaster of the cult classic 3D platforming collectathon. Despite performance and optimization issues with the Switch version, as well as some carried over flaws from the original, SpongeBob SquarePants: Battle for Bikini Bottom - Rehydrated is absolutely worth the $30 price of admission. If you are (or ever have been) a Goofy Goober, don’t skip out on this nautical nonsense.

Are you ready, kids? The cult classic is back, faithfully remade in spongetastic splendor! Play as SpongeBob, Patrick and Sandy and show the evil Plankton that crime pays even less than Mr. Krabs. Want to save Bikini Bottom from lots of rampant robots with your mighty bubbles? Of course you do! Want to underpants bungee jump? Why wouldn't you! Want to join forces in a brand new multiplayer mode? The battle is on!