The Outer Worlds on Switch getting Murder on Eridanos DLC 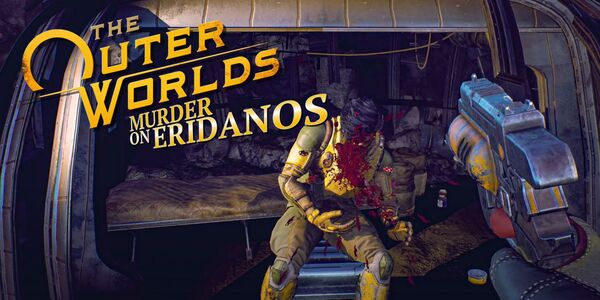 The Peril on Gorgon DLC just recently hit the Switch version of The Outer Worlds, and fans already have something else to look forward to. While we're not sure of the release date, the Switch eShop has confirmed that the Murder on Eridanos DLC is coming our way as well. The DLC is set on the gas giant Eridanos, and the plot focuses on Halcyon Helen's final adventure.

A severed arm and a mysterious message lead the crew of the Unreliable to the Gorgon Asteroid, formerly the site of one of Halcyon’s most ambitious and disastrous scientific undertakings, now a lawless den of monsters and marauders. Wealthy recluse Minnie Ambrose tasks the crew with finding answers about Dr. Olivia Ambrose, her mother and the doomed project’s disgraced director, but they are soon ensnared in an intrigue that will change the colony forever.

Check out the launch trailer for The Outer Worlds: Peril on Gorgon

The Outer Worlds: Peril on Gorgon is out now on Nintendo Switch.

This is the first narrative expansion to the critically-acclaimed and award-winning sci-fi RPG from Obsidian Entertainment and Private Division.

A severed arm and a mysterious message lead the crew of the Unreliable to the Gorgon Asteroid, formerly the site of one of Halcyon’s most ambitious and disastrous scientific undertakings, now a lawless den of monsters and marauders. Wealthy recluse Minnie Ambrose tasks the crew with finding answers about Dr. Olivia Ambrose, her mother and the doomed project’s disgraced director, but they are soon ensnared in an intrigue that will change the colony forever.

The Outer Worlds updated to Version 1.3 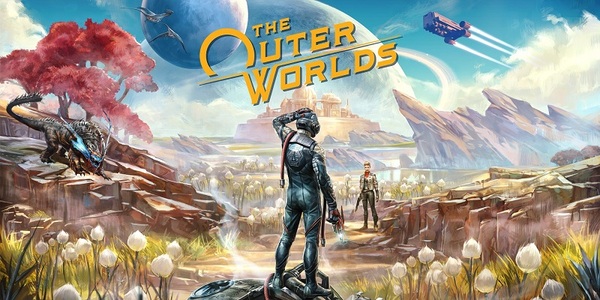 The Outer Worlds has been updated to Version 1.3. Check out the notes on this update below.

- Players will now be able to trigger the DLC Peril on Gorgon after the content has been purchased and installed. 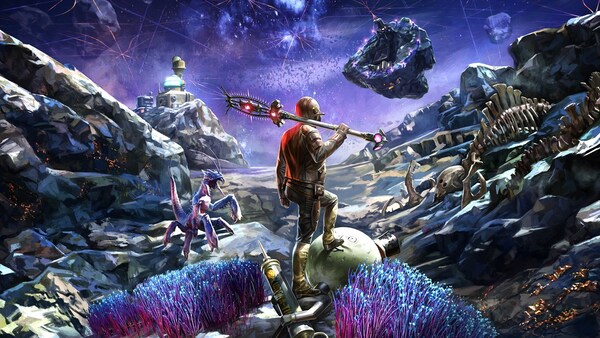 The Outer Worlds: Peril on Gorgon is coming to the Nintendo Switch on February 10th!

Employees visiting the Halcyon Colony on their Switch consoles will be able to purchase and explore the Gorgon Asteroid in this first of two narrative expansions.

Key Features:
- Intrigue and danger: Search an abandoned Spacer’s Choice facility and encounter a cast of new characters as you uncover the mystery behind the sudden cancellation of the Gorgon Project.
- New locations: Explore the treacherous canyons of the Gorgon Asteroid and encounter enemies that have been warped by science.
- More science weapons: Discover three outlandish new science weapons, including the P.E.T. (Pest Extermination Tool), an exciting new melee weapon that draws in enemies for close-range attacks.
- Expanded character customization and lore: An increased level cap, additional perks and flaws, wholly new armor sets, and several variants for existing gear. Plus, dig into the story of the Gorgon Asteroid with new Portable Phonograph audio logs that reveal the salacious secrets of a scientific experiment gone wrong.

On top of the release of this expansion, Switch players can expect to see Patch 1.3 reach their Nintendo Switch consoles on February 3rd. This patch will include the following:

Features Added:
- Players will now be able to trigger the DLC Peril on Gorgon after the content has been purchased and installed.

So mark your calendars, spacers, and get ready to expand your job duties to the Gorgon Asteroid!

The Outer Worlds: Peril on Gorgon is the first of two narrative expansions that can be purchased for the Nintendo Switch. A copy of The Outer Worlds base game is required to play Peril of Gorgon. 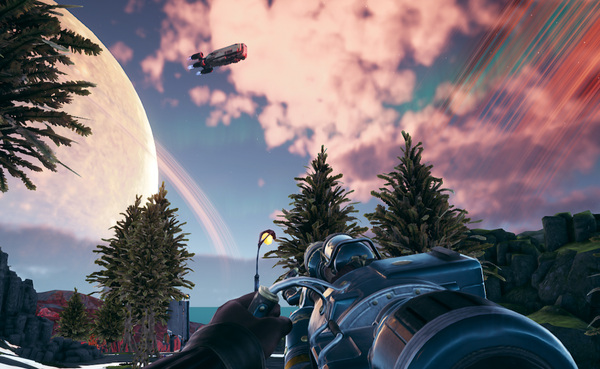 The Outer Worlds has finally gotten its long-awaited Version 1.2 patch. Check out the full patch notes for this update below.

Features included in this update:

Changes and Fixes included in this update: 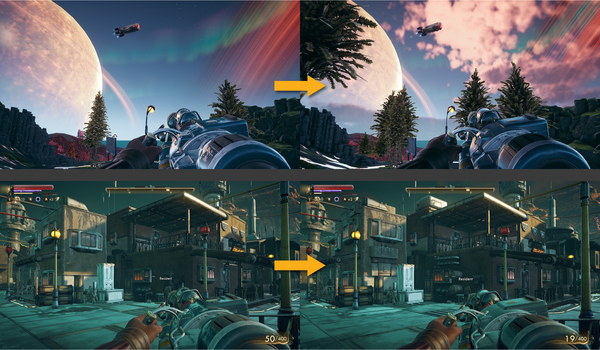 We new a big patch for The Outer Worlds was coming soon, and now we finally have a release date. Fans can expect the patch to drop on Oct. 21st, 2020, and it should improve all sorts of areas in the game. It definitely revamps the game's visuals, as you can see in the comparison shots above.

Along with that, The Outer Worlds is going to run a special sale starting Oct. 22nd, 2020. Details on pricing haven't been shared yet, so we'll have to wait until next week to find out.

RUMOR: The Outer Worlds sequel in the works 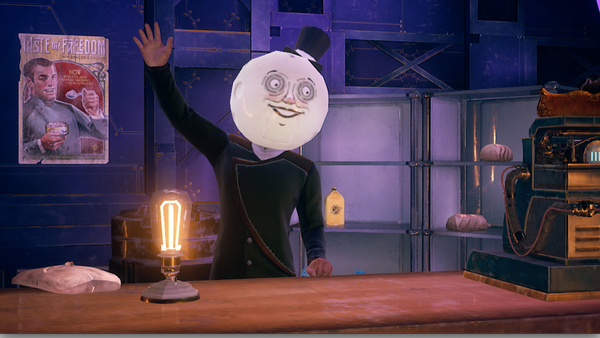 The Outer Worlds took awhile to come to Switch, but it did eventually make its way over. We're also getting a major update soon, and DLC is in the works as well. Support has been great so far, but could we see even more of The Outer Worlds? It seems like developer Obsidian has plans for that.

Industry insider Daniel Ahmad has mentioned that Obsidian is currently exploring the idea of a follow-up to The Outer Worlds, but nothing is set in stone. Also making things more complicated is the fact that Microsoft now owns Obsidian. Even if a sequel is created, it might end up being Xbox Series X/S exclusive.

The Outer Worlds patch coming to Switch this month, will improve visuals, framerate, and more

Coming in for a landing this month
09 October, 2020 by rawmeatcowboy | Comments: 0 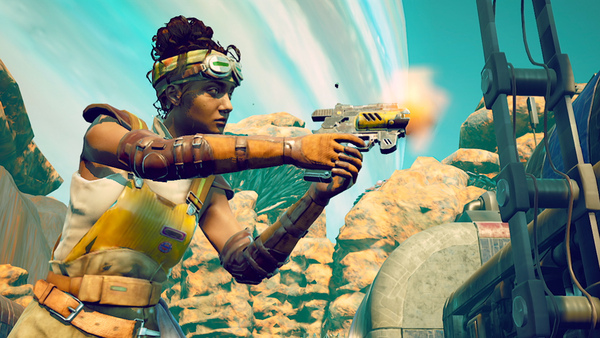 While it's been a long time coming, we can now see the light at the end of the tunnel. The team behind The Outer Worlds has announced that a big patch is coming to the Switch version, and it's due out this month. While we don't have an exact date or full patch notes, we do know that this update will improve visuals, FPS, and a lot more. Let's hope for a big improvement!

Peril on Gorgon begins with a cryptic message beckoning you to investigate the Gorgon Asteroid. This remote scientific facility was once a beacon of crowning achievement in developing Adrena-Time, a modern marvel which improved health and worker productivity. However, the program was abruptly and inexplicably shut down. You must venture through deep canyons, defunct laboratories, and abandoned research facilities to piece together the clues that hold the truth behind one of the darkest secrets within the Spacer’s Choice corporation. What will you find on Gorgon?

“We wanted to dig into pulp noir to explore the seedier side of Halcyon’s corporations,” said Carrie Patel, Game Director at Obsidian Entertainment. “With Peril on Gorgon, players (and their favorite crew members!) can explore an exciting new location filled with intrigue and threats, and they can uncover dangerous secrets about Spacer’s Choice.”

Peril on Gorgon brings a host of additional content for players. It raises the level cap within the game to allow for more flexibility in skill customization and there are more perks and flaws which can provide rare bonuses or unique obstacles. The expansion also introduces three new science weapons and a variety of new armor sets. Peril on Gorgon expands on the award-winning formula of The Outer Worlds while giving players new reasons to revisit and further explore the Halcyon colony.

“The Outer Worlds is a deeply satisfying RPG, full of the player choice and a rich narrative audiences have come to expect from Obsidian, and Peril on Gorgon is a true to form expansion,” said Allen Murray, Vice President of Production at Private Division. “This expansion welcomes players to return to the Halcyon colony for even more of the dark humor, compelling story, and exciting adventures that they loved from the base game.”