No need for a constant connection anymore
10 September, 2020 by rawmeatcowboy | Comments: 0 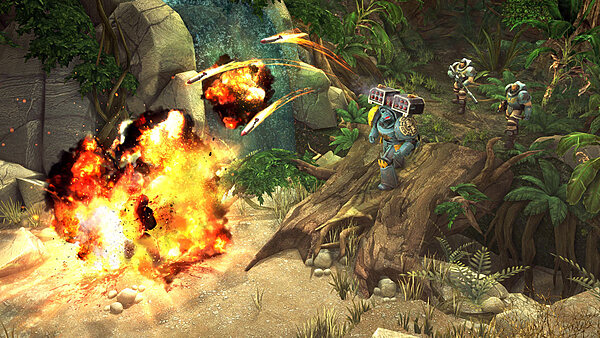 An update has released for Warhammer 40,000: Space Wolf. You can check out the notes on this update below.

Warhammer 40,000: Space Wolf, an XCOM-like turn-based tactics about Space Marines of the Space Wolves chapter who struggle against tainted servants of Chaos and the sinister Necrons, just received a fresh update which delivers a very important and long-awaited feature.

We have heard multiple requests from our players on Nintendo Switch and made it possible to play the game without a constant internet connection, this means that from now on the game is full offline. As of this moment, players can use the internet connection only as an optional feature to save progress on the server. Also, in this update, we have fixed the Rage Attack and several minor bugs.

Warhammer 40,000 animated series 'Angels of Death' gets a new trailer

Warhammer 40,000: Space Wolf launched on Switch just a few days back, and now fans of the franchise already have something else to look forward to.

An official Warhammer 40,000 animated series is in the works, and a new trailer is now available. The series is called Angels of Death, and was announced back in 2018. The goal was to have it out sometime in 2019, but that obviously didn't come together. While no new release date is set, hopefully the release of the today's trailer points to a 2020 launch.

Warhammer 40,000: Space Wolf is an extraordinary blend of a turn-based strategy and card game, featuring an epic story campaign, wide character customization system, and, also a tremendous amount of weapons and equipment.

Space Wolf comes to Nintendo Switch with all the previously released DLCs and a whole new local co-op mode, where you will be able to stand up together with your friend against Enemies of the Imperium.

Turning its attention to Switch next year
05 December, 2019 by rawmeatcowboy | Comments: 0

HeroCraft is very delighted to announce that the hugely successful turn-based strategy game Warhammer 40,000: Space Wolf will launch on Nintendo Switch on the 23rd of January, 2020.

The Nintendo Switch version will not only include all previously released additional content but also a whole new local co-op experience where you will be able to stand up together with your friend against a common enemy.