Rico the Squirrel was living a peaceful life collecting acorns. It was another peaceful day doing his work with his sister Lottie...until an owl came out of nowhere and kidnapped his sister!

Lock in that discount today
09 February, 2021 by rawmeatcowboy | Comments: 0

If you've been looking forward to the 2.5D platformer Dotori, you don't have much longer to wait. The game is now available to pre-load, and it launches on Feb. 25th, 2021. There's even a 20% discount available right now. Read all the details on the game below.

DOTORI is a side-scrolling action adventure game featuring Rico the Squirrel's quest to save his sister, who was kidnapped by a mysterious owl.

PROLOGUE: The journey to save Lottie

...until an owl came out of nowhere and kidnapped his sister!

Now Rico must embark on a dangerous journey to save Lottie….

● What exactly is DOTORI?

DOTORI is a side-view 3D platformer game that provides unique gameplay experience with its toon shaded characters and charming stages. As Rico the Squirrel, player embarks on a journey to save Lottie by progressing through stages filled with creative gimmicks and obstacles.

● Into the world of mysteries

Each chapter has its own different design and gimmick based on where it takes place. Player will challenge the stages located in various regions such as the prairie, fairyland, arcane structure, trading estate, etc.

For instance, cutters and molten metal can be found in the trading estate, which can be avoided or jumped over by gimmicks such as jump buster and magic spring.

Only three actions are needed to explore the stages in DOTORI: run, jump, and throw. Certain stages require special moves such as double/wall jump, and player may need to use unique stage gimmicks in some stages.

Actions become more colorful with magic cubes that can be found in DOTORI. Player can stop the cube in the air to use it as a foothold, or use it as a shield to block deadly lasers.

To continue his journey to save Lottie, Rico must fight powerful enemies waiting for him in each region. The bosses will strike at Rico with their own special attacks.

Player must observe how the boss moves and find its weak point. But be careful: one small mistake can lead to serious damage!

DOTORI has a total of 40 stages, and the hidden chapter is unlocked upon clearing the game.

A goliath so powerful it can throw a big rock with ease.

For reasons unknown, it doesn't let anyone escape from the trading estate.

A feeble-minded and violent reptile that resides in the trading estate.

It feeds on anything and everything that falls off to the molten metal.

A mystic being that oversees the arcane structure.

Its extraordinary skills in battle and flight are quite threatening.

Do squirrels dream of collecting acorns?
28 January, 2021 by rawmeatcowboy | Comments: 0 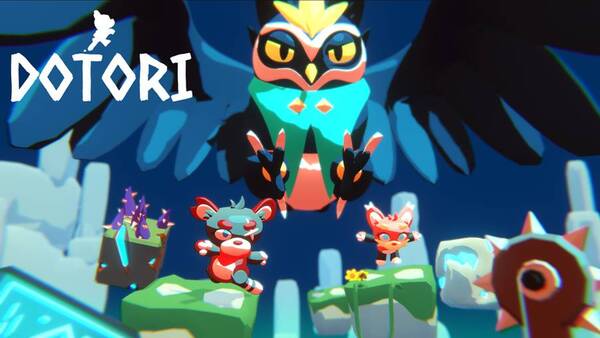 Dotori was announced for Switch all the way back in 2019, but rest assured, the game is still coming. Publisher CFK has shared new details on the game while reconfirming a launch in February 2021. Check out the new round of info below.

It was another peaceful day for Rico, doing his work with his sister Lottie. Then, out of nowhere, an owl flew by and kidnapped Lottie!

Now Rico must embark on a hard journey to save her....

As Rico the Squirrel, player gets to explore places filled with mysteries. The stages are full of challenges that require agility and quick reflexes. Player will see Rico perform a variety of actions using only simple commands such as run, jump, and throw.

DOTORI, Rico's tale to save his sister, will be released on Nintendo Switch (DL Only). It will have its official release date soon.

His face seems to suggest he has been through many hardships in life.

His sister is more precious than anyone else.

It was a peaceful day like any other for the family until an owl took her away.

A mysterious owl with bizarre hairstyle.

He kidnapped Lottie for reasons unknown.

DOTORI is a 3D platformer game. The player must solve the elements of a simple puzzle, as well as speed and timing, to clear the stage.

Publisher ORENDA has confirmed that they're bringing Dotori to the Switch sometime in the future. No word on exact release date or pricing yet.