Behind the Gauntlet: Making Spellbreak with the Proletariat Team video feature

Breaking down the spells
14 September, 2020 by rawmeatcowboy | Comments: 0

The Spellbreak team hosted a special panel for PAX 2020 Online, and now you can see the full event above! Read a summary of the event below.

Join the team behind the hit Spellbreak as they pull back the curtain on development, giving PAX attendees an exclusive look behind the scenes on what the game used to look like on its way towards it’s recent global release. Original art inspiration, completely different combat and more give fans a look at just how much a game can change from Point A to Point B, and how even scrapped ideas can still find their way into influencing key parts of a finished game. Stick around until the end for an exclusive announcement on upcoming content!

Casting a spell on players worldwide
09 September, 2020 by rawmeatcowboy | Comments: 0 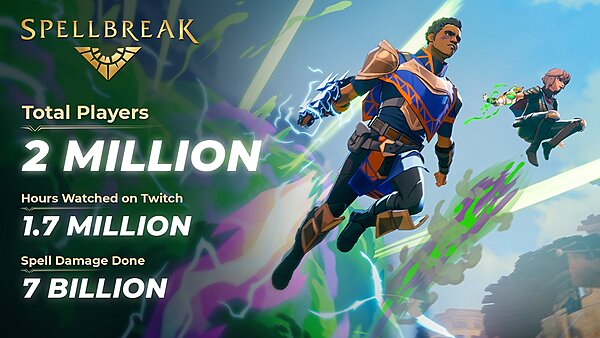 Spellbreak, the magical take on battle royale games, is off to a great start. Within the game's first week, 2 million players have joined in on the experience. With the game being free-to-play, there's no reason not to give it a shot! Expect to see this one continue to climb.

GoNintendo Video - Spellbreak is like Fortnite and Harry Potter combined

Spellbreak is the latest free-to-play title to come to Switch, and it's also a new entry into the Battle Royale genre. Picture Fortnite's gameplay, but with magical powers instead of guns. Harry Potter would feel right at home!

Check out the launch trailer for Spellbreak

Spellbreak for Nintendo Switch is available now! Spellbreak is a multiplayer action-spellcasting game where you unleash your inner battlemage. Master elemental magic to fit your playstyle and cast powerful spell combinations to dominate other players across the Hollow Lands.

Spellbreak has launched on all platforms today, Switch included. Wondering how this magical battle royale shapes up on Switch? Check out some gameplay from the Switch version above.

Casting a spell on Switch today
03 September, 2020 by rawmeatcowboy | Comments: 0

Award-winning independent game studio Proletariat today announced that their highly-anticipated magic-focused battle royale title, Spellbreak, is now available on the Epic Games store, PlayStation 4, Xbox One, and Nintendo Switch. Spellbreak will be one of the first titles on the market to support full cross-play and cross-progression across these platforms. Players will be able to create a Spellbreak account and access it on any supported platform to maintain their game progression, customizations, and stats. Players will also be able to use their account to easily find friends and create cross-platform squads.

“Today marks the beginning of a new era in multiplayer gaming. The team worked incredibly hard to deliver one of the first ever simultaneous cross-platform, cross-play, and cross-progression launches,” said Seth Sivak, CEO of Proletariat. “Spellbreak’s unique combat and innovative gameplay will be available for all players to play with whoever they want, on whatever platform they want, regardless of hardware choice.”

Spellbreak is a multiplayer action-spellcasting game where players unleash their inner battlemage and wield two powerful magic gauntlets that blend devastating spell combinations to control the battlefield with fiery tornadoes, electrified gas clouds, and more! Set in the Hollow Lands, players can explore the map to find tactical advantages and discover hidden chests that contain magical runes that give new abilities, including flight, teleport, and invisibility.

Spellbreak is a multiplayer action-spellcasting game where you unleash your inner battlemage. Master elemental magic to fit your playstyle and cast powerful spell combinations to dominate other players across the Hollow Lands. Access your Spellbreak player account and play with anyone on all supported platforms with cross-progression, cross-play, and cross-party features at launch.

Along with the new trailer above, we now have confirmation that Spellbreak is launching for Switch on Sept. 3rd, 2020. This is a free-to-play title, which makes for a great reason to check it out at launch! 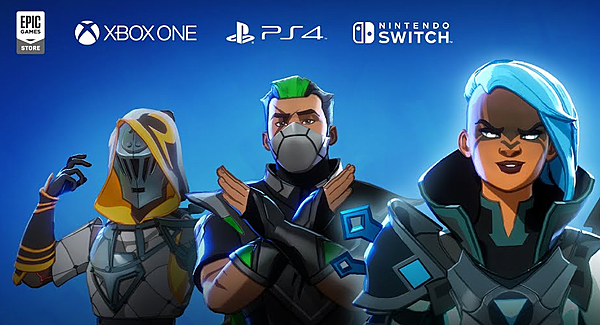 Spellbreak's devs think that cross-play is the future, which is why they're working hard to make sure their game is ready-to-go at launch no matter what platform you play on. Cross-progression, cross-play, and cross-matchmaking are in the game right from the start, and in an interview with GamesBeat, Proletariat CEO Seth Sivak talked about the decision.

“We’re going to be on all those platforms on the same day. We’re going to have cross-progression, cross-matchmaking, and cross-parties on day one. So players will be able to use the same account everywhere. They can party up with any anyone on any of those platforms, and they will also matchmake across so PS4 players can play with Xbox One players.

It’s a ton of work, but we think we’ll be the first free-to-play game ever to launch on those platforms with cross-progression, cross-matchmaking, and cross-parties on day one.

One piece is just that you have to build your own account system basically, although there are some [tools] that are starting to become available like one that Epic has now through Epic Online Services. On top of that, you need to manage all the different platforms as far as what’s showing and what’s not showing and then basically build a friend system that allows for people to connect their accounts and have a large-scale shared friends list.”

Check out another round of screens for Spellbreak 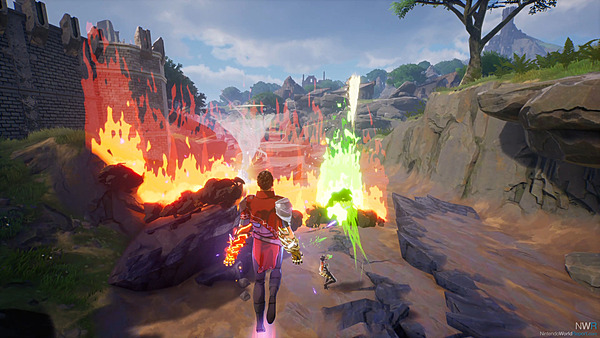 Spellbreak, the spell-casting battle royale, is making its way to Switch later this year. In an interview with NWR, Seth Sivak, CEO of developer Proletariat, makes it very clear that the team is taking the Switch version of Spellbreak very seriously.

"The Switch is a great device and we all love our Switches at the studio. We made it a priority for launch because we have a goal to make it as easy as possible for Spellbreak players to play with their friends, and with cross-play we open up a huge audience on the Switch. The game will support cross-play between all platforms (PC, PS4, Xbox One, and Switch) at launch. We will also have full cross-progression at launch, meaning players can use the same account and retain their XP and items across all platforms."

As you might be able to tell from the image above, the look of Spellbreak was inspired by a few different franchises, The Legend of Zelda included.

"The art style was inspired by films from places like Studio Ghibli. For the world itself, we looked to games like Legend of Zelda: Breath of the Wild and Shadow of the Colossus. The world, characters, and visual effects are all things we’re very proud of."

When it comes to resolution and framerate, Spellbreak will offer the following experience.

Lastly, Siyak said that Spellbreak won't have gyro aiming at launch, but it's going to be added in a "near-term future update."