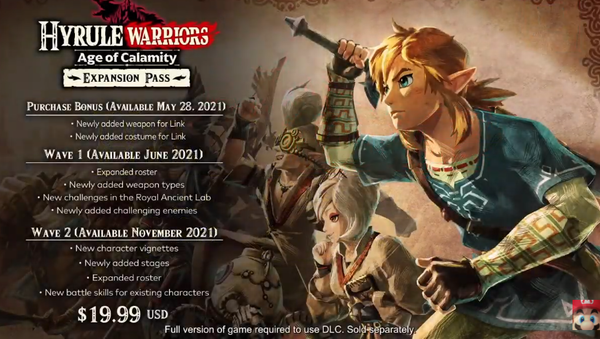 Hurry before they disappear!
27 January, 2021 by rawmeatcowboy | Comments: 0 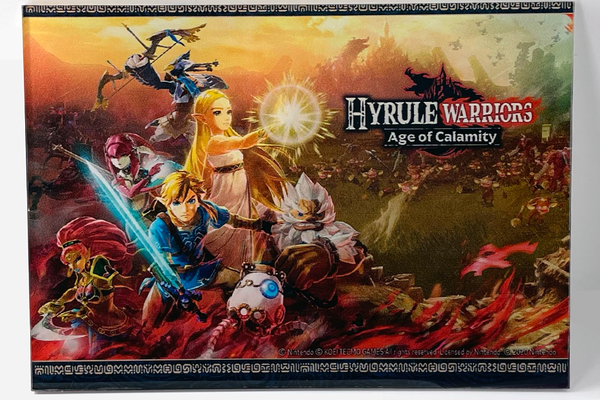 There's two updates over at the My Nintendo website for fans of the Legend of Zelda. First up, the above acrylic panel for Hyrule Warriors: Age of Calamity is up for grabs, and is priced at 1,000 Platinum Points. The panel measures 5"x7", and is 1/8 inch thick. You can grab yours here. 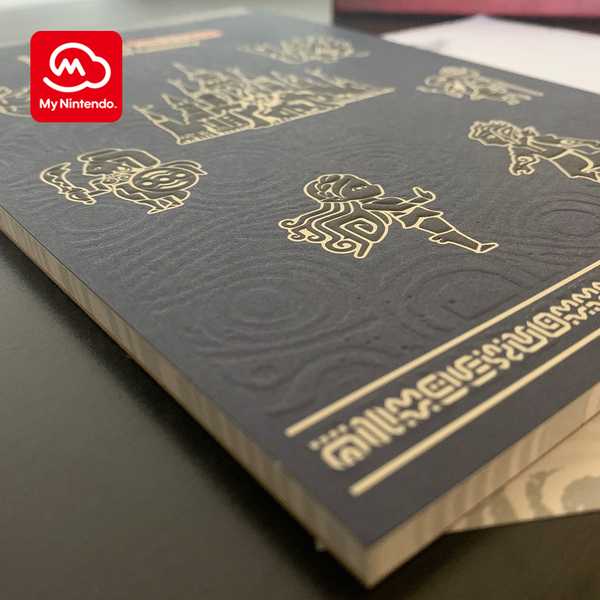 Along with that the Hyrule Warriors: Age of Calamity memo pad is back in stock. This item costs 600 Platinum Points and can be picked up here.

Thanks to Ryan for the heads up!
Submitted by: ryan
Rating: 0 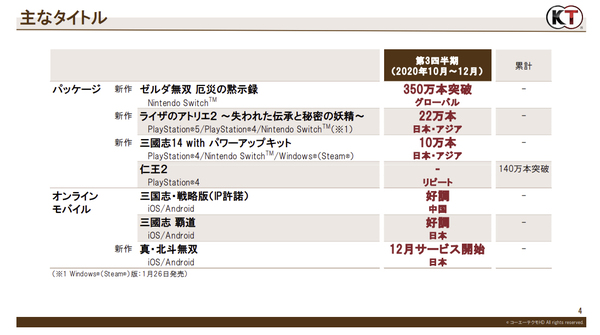 According to a recent sales data presentation from Koei Tecmo, Hyrule Warriors: Age of Calamity has now shipped over 3.5 Million units worldwide. Between its release and the holiday season, approximately 3 million units were shipped. Since then, an additional 500,000 units have been shipped out, and the game has continued to sell well. It is likely that another batch will shipped out in the future, but for the time being, the game is already on its way to becoming one of the Nintendo Switch's best sellers. 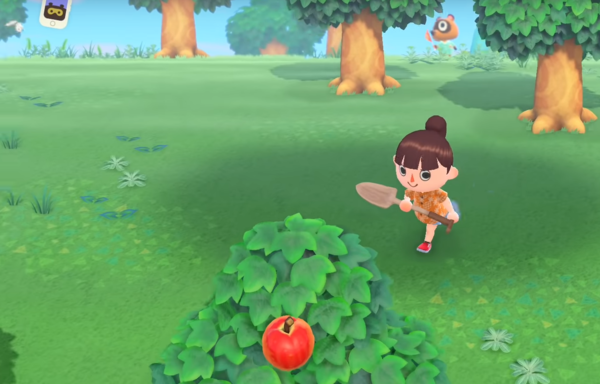 We've been getting a lot of sales data from the world over recently, and today we get some details from Germany. Check out the details on a number of Nintendo-related titles below.

A collab unlike any other
29 December, 2020 by rawmeatcowboy | Comments: 5 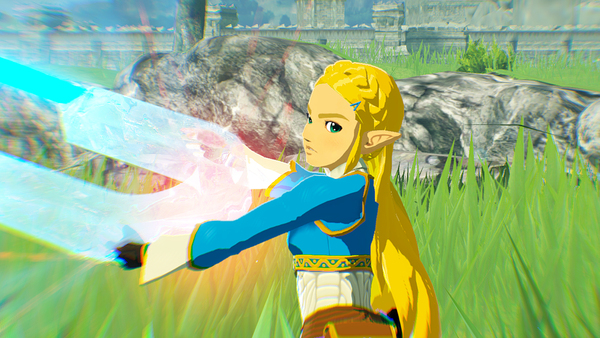 The most recent issue of Nintendo Dream magazine features an interview with Koei Tecmo producer Yosuke Hayashi on all things Hyrule Warriors: Age of Calamity. The wonderful PushDustin has gone through and translated the interview, which you can read through below.

- Hayashi wanted players to enjoy playing through the story, as AoC is the first Musou game with an emphasis on story
- for creating the concepts of the 4 Champions, the team listed concepts for the Zelda team
- none of these concepts were shot down.
- the fighting style of the Champions was inspired by some of their battle scenes in Breath of the Wild
- Revali's playstyle was inspired by the weapons they left Link
- the diaries/memories in BoTW also helped guide the team in creating the concepts
- the Zelda team was helpful in adjusting Koei Tecmo's concepts and getting the feeling of the Champions right
- Daruk was originally slower, as it's common to have a heavy character in Musou games
- this didn't feel right for the character though, so they decided to add the Magma attacks mid-development
- the Paraglider for Daruk was difficult to get right
- each character originally used the same paraglider, but they changed this to make things better suited to each person
- with Mipha, the team started off with her weapon as a base, and then added her special abilities to it
- the team wanted the 4 Champions to be easy to pick up and play
- for the Trident, Mipha was made before Link's Trident move set
- It was important to make every character true to the source materia
- the concept for Revali was flight, and it took the team several times to get this right
- the Sheikah items can be used in mid-air as well, and is different than using it on the ground
- Urbosa's special action is being able to charge lightning, and the team jokes it like charging a smartphone
- Impa's feeling was "Tricky", Zelda was "Magician", and both Link and Urbosa were "Orthodox"
- Urbosa's playstyle is probably the most straight forward of the 4 Champions
- Urbosa is very popular in North Americ
- Hestu was one of the first characters decided and the whole team was for his inclusion
- the theme was for Hestu to use Koroks and to dance
- the team had issues with Hestu's size, which is why they decided to make his head semitransparent to aid the player
- Maz Koshia was decided at the very start of development to represent the 120 Monks in BoTW
- since Maz Koshia was the final boss of the DLC, the team felt he would be the most memorable
- the team felt that Hestu and Maz Koshia would appear naturally during the events 100 years prior to BoTW
- for Maz Koshia's moveset, the team used the idea of having the gimmicks inside the shrines as his basis
- getting the voice for Maz Koshia was tough, and they worked closely with the Zelda team to ensure he was still mysterious

First party demos up for grabs
21 December, 2020 by rawmeatcowboy | Comments: 0 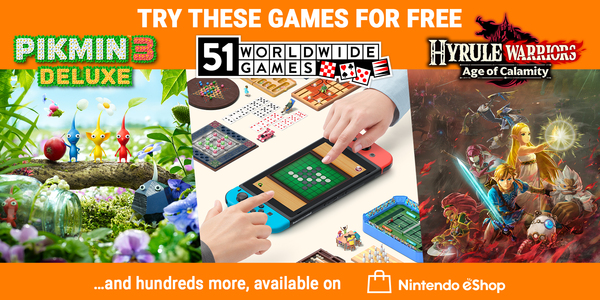 The holiday season will no doubt bring in millions of new Switch owners. For those looking for what to play, why not try out some games for free? Nintendo has three demos for big first party titles, and just in case you forgot about them, you can read a refresher below.

Try these three games on Nintendo Switch for free

From sword-swinging action and exciting exploration to relaxing multiplayer fun with family and friends, Nintendo Switch has fun for everyone. Looking for something new? With these demos, available on Nintendo eShop, you can try out Hyrule Warriors: Age of Calamity, Pikmin 3 Deluxe and 51 Worldwide Games right now without paying a penny!

In this story set 100 years before The Legend of Zelda: Breath of the Wild, the fate of Hyrule lie in your hands! Travel into the past and fight to prevent the kingdom’s destruction at the hands of Calamity Ganon and his forces of darkness.

Touch down on PNF-404 and join Alph, Brittany and Charlie on a quest to save Planet Koppai with their new friends, the Pikmin! Command a capable crop of tiny creatures and explore a hostile planet in this exciting blend of action and strategy.

Clear the table and settle down with family and friends to enjoy a diverse collection of timeless favourites! From ancient board games to modern classics, relaxing card games to fast-paced toy sports, experience the games that have shaped cultures all around the world. 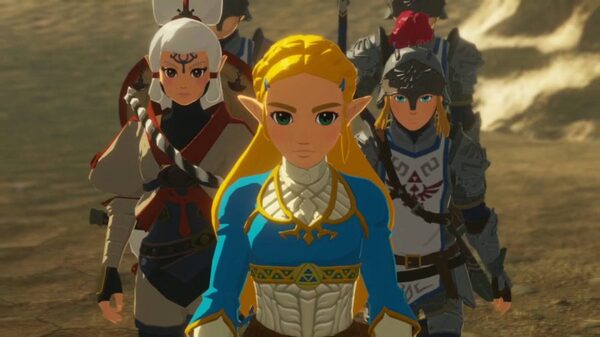 Zelda: Breath of the Wild was the first official game in the franchise to give a voice to Zelda. That voice was provided by Patricia Summersett, who reprised her role for Hyrule Warriors: Age of Calamity. In an interview with Zelda Dungeon’s The Champion Cast, Summersett talks about how some of the negative reaction to her acting impacted her, and how she used some of that negativity to fuel her performance in Age of Calamity. Check out her comments below.

“That was tougher to deal with at first, because I was very sensitive to it, and just wanted everybody to be as happy as possible for such a big game [Breath of the Wild]. You really have to keep that kind of stuff in perspective, or one does. You really got to be positive about that stuff. I’d say the negative people tend to be more vocal online, just by default – that’s the nature of the algorithms of the net, and it does take some getting used to. One has to build a thick skin, I think, with something like this. I’d definitely say my skin has gotten a lot thicker over the last years, since taking on this particular role, just because it’s required more thick skin than some of the other kinds of failures or critiques I’ve had in the past.

There’s something in that to channel as well, because that’s how Zelda feels, and she’s doing great, but she feels that way eternally, and that’s her plate. It’s very relatable in that way, I think. Anybody who’s taking risks and trying to work very hard at anything, you come across that. I do love that about her character in general, the fact that they dig into that part of the storyline for her: what it means for her to feel like a failure, but keep pushing forward and striving for something bigger, and for the benefit of all. One can use that as inspiration as one uses heroes as inspiration.”

Praise from the UK side of things
16 December, 2020 by rawmeatcowboy | Comments: 0

Wondering what the UK press had to say with Hyrule Warriors: Age of Calamity? Nintendo has put together a new trailer to share some accolades from those critics. Check out the comments and scores in the spot above.

The best game critic out there
13 December, 2020 by rawmeatcowboy | Comments: 2

Tom has been killing it with reviews lately! He's back yet again, this time with a review of Hyrule Warriors: Age of Calamity. See what Tom has to say in the video above.

Nintendo ran a number of new commercials during the Game Awards 2020: One of those spots was for Hyrule Warriors: Age of Calamity. If you missed the commercial during the big show, you can now give it a watch above.