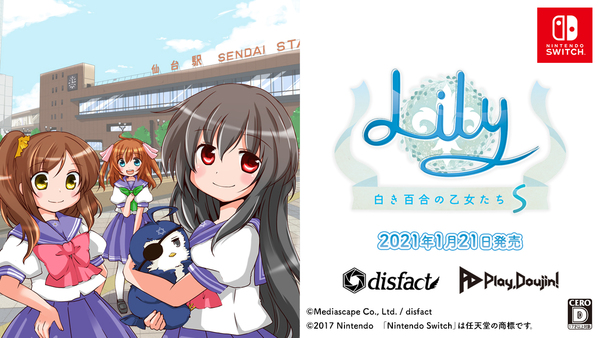 Publisher Mediascape and developer Disfact has announced that their strategy RPG "Lily: Shiroki Yuri no Otome-tachi S" will be launching for Switch in Japan on January 21st, 2021. An English localization has yet to be confirmed. Check out a translated synopsis of the game via Gematsu below.

About the Lily Series
Lily: Shiroki Yuri no Otome-tachi is content that began release at Comic Market in 2015. It developed a cult following thanks to its passionate fans that resonated with its sensational story, which includes the creation of numerous fan art and screenshots. It is highlighted by its high-quality music created by Atsushi Morimori and Ham. Lily: Shiroki Yuri no Otome-tachi S is an easier-to-play remake for Switch based on the original Lily and jam-packed with all related works, such as the Lisblanc (Steam) and side stories.

Stress-Free Strategy RPG
Have you ever played a strategy RPG where probability was an issue? Accuracy rate, critical rate, growth balancing… Lily eliminates all random numbers, and puts every element within the calculations of the player. Also, since characters grow based on story progression, there is no need to earn those pesky experience points during battle. With a thorough focus on strategy and stress-free playability, this is the ultimate strategy RPG.