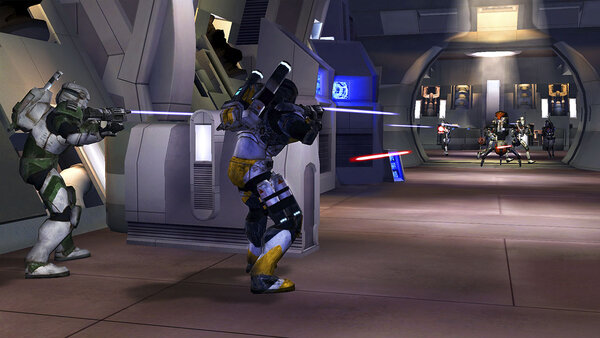 The rumor of Star Wars: Republic Commando coming to Switch popped up a couple weeks back, and today the news was confirmed. The game is set to launch on April 6th, 2021, and in an interview on StarWars.com, Lucasfilm Games executive producer Matt Fillbrandt shared his excitement for the upcoming port.

It’s a very rewarding feeling to see it have such a strong following all these years later and to be a part of releasing it again. It was originally only released on Xbox and PC, so to be able to bring it out on PlayStation and Switch for Star Wars gamers that may have read about it, but never had a chance to play it, is exciting. Looking back, so many talented people put so much of themselves into bringing this game to life. It was a great collaborative effort over 15 years ago, and all of their great work will be available for old Republic Commando fans to play again on PlayStation and Switch, and now for a new generation of fans to try for the first time.

Episode 7 of WandaVision sneaks in GameCube and Wii references

It's hard to talk about WandaVision without going into all sorts of spoilers, but I promise I'll keep things spoiler-free! Episode 7 of the series launches tomorrow, and a new teaser spot for the episode has been shared online. One of the scenes in that spot shows off some bigtime Nintendo life, with quick shots of both the GameCube and Wii! You can see the Nintendo nods at the 24 second mark.

Most impressive
10 February, 2021 by rawmeatcowboy | Comments: 5 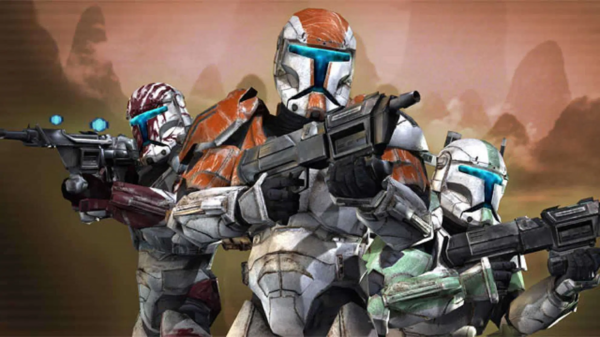 Star Wars: Republic Commando was a tactical first-person shooter that launched back on the original Xbox and PC back in 2005. Rumor has it the game is making a return, and it's heading to Switch. 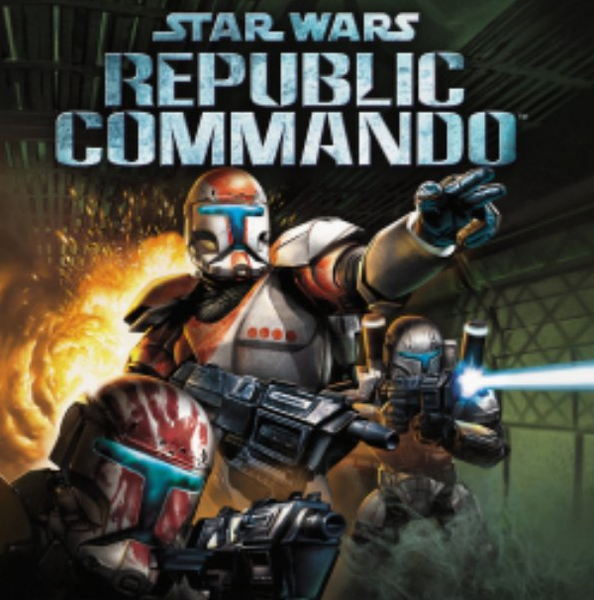 Dataminers are reporting that a version of the game has been uploaded to Nintendo's servers as of today, complete with the icon you see above. Aspyr is tied to the title, which makes a lot of sense, as they've re-released other classic Star Wars games on Switch.

If the game has already been uploaded to Nintendo's servers, you'd imagine that a release date is right around the corner. We'll just have to hang tight and wait for Aspyr to officially spill the beans.

A journey worth remembering
10 February, 2021 by rawmeatcowboy | Comments: 0

DuckTales NES producer reveal how Scrooge's pogo attack came to be, and content that didn't make the final cut 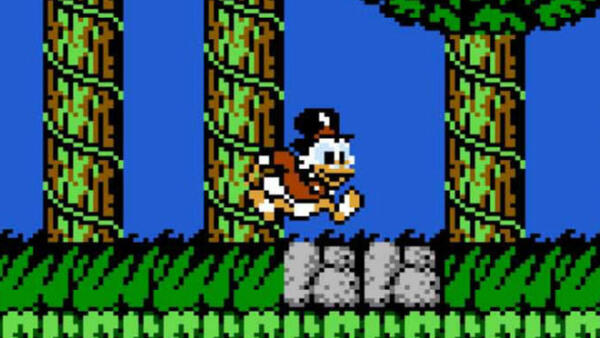 DuckTales is one of the most famous NES games, and a shining example of Capcom's early work with licensed games. It's a title that fans still remember the adventure fondly, and plenty of its moments are iconic. For example, who could forget Scrooge's pogo attack? In an interview with Kotaku, producer Darlene Lacey reveals how that came to be.

“We also needed to make sure that the content met Disney standards. For example [in another title] one licensee had Donald Duck clubbing baby seals! It was also important that the Disney characters weren’t killing things. The Disney game designs had to be more creative than simple point and shoot games. That’s how elements such as Scrooge’s pogo jump with his cane in DuckTales came about.”

As with any game, there are some elements that don't make the final cut. What got left behind in the early days of the DuckTales game? Lacey revealed a few last-minute changes.

“There was also originally an option for Scrooge to give up his fortune, but this seemed out of character, so we removed that. ...Scrooge told his nephews: ‘There really is more important treasure than this. That is . . . Dream and Friends.’ It seemed so earnest and dramatic, I was so tempted to leave it as is, but I knew I couldn’t. So, I changed it to the more polished, but forgettable ‘Right, lads! I couldn’t have done it without you. I really am the richest duck in the world.’ I love that fans found out about the original ending. It was the better line!”

DuckTales NES prototyped discovered, and it includes a never-before-heard song

DuckTales is one of the best games on the NES without a doubt, and it has a fantastic soundtrack to go with it. Many old-school gamers know that soundtrack through and through, which is what makes today's find so special.

All these years after the game launched, a prototype version has been discovered. As you might expect, there's a number of gameplay and visual changes from the prototype to the final version of the game. That's all well and good, but the prototype also includes a song that didn't make the cut for the final game.

The song above was the original tune intended for the map screen, but was cut for unknown reasons. Give it a listen and hear what could have been!

Square-Enix details how they chose the songs for Kingdom Hearts: Melody of Memory 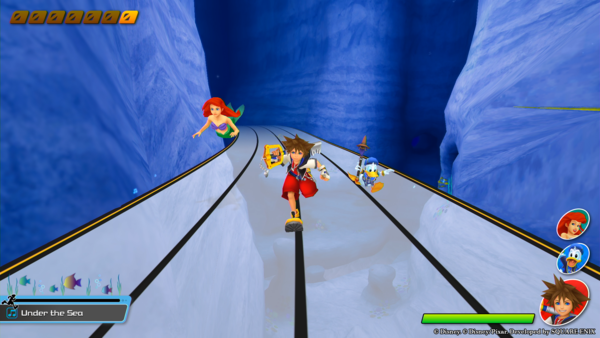 Square-Enix has shared a new dev blog for Kingdom Hearts: Melody of Memory, and it gives some insight into the game's soundtrack. There are literally hundreds of tunes in the Kingdom Hearts series, but all of those can't be crammed into the game. How do you go about selecting the right tracks? See the approach Square-Enix took in the snippet below.

When you’re making a rhythm action game, track selection is one of the first things you have to consider - but deciding which tracks to include in Melody of Memory was a particularly tricky challenge. After all, there’s a genuinely massive amount of music in the KINGDOM HEARTS series - we’re talking 600 tracks, perhaps 700 if you include the latest releases.

Right at the start of development, we made a list of all the different music across all the various games. Then, we collected all kinds of information that we could use to identify the songs that had left a particularly strong impression on players.

For example, we looked at which tracks had been included on the set list of the recent KINGDOM HEARTS Orchestra -World of Tres- tour, and which were voted most popular by fans. We collected all kinds of data, and by studying it, we were able to work out many of the songs we knew would really excite people.

The element of the game that really brought the selection into focus though was the World Tour. The core theme of that mode is for players to relive the KINGDOM HEARTS series (so far) through music, so we made sure to include as many tracks from important and memorable scenes as we could.

These considerations allowed us to whittle the options down to a shorter list, but when it came to the final selection, other factors came into play - some technical and some emotional.

Hot Topic gets a slew of new Epic Mickey shirts 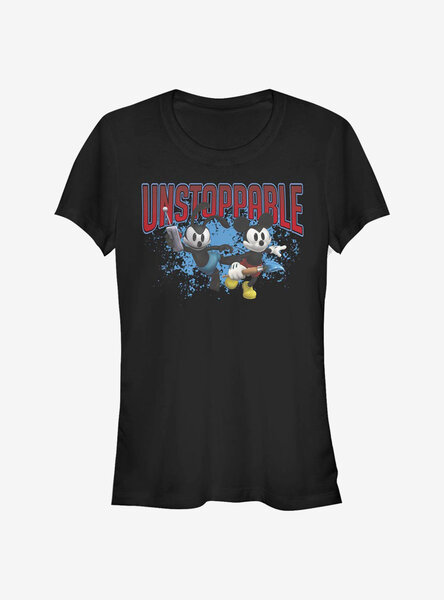 Epic Mickey is celebrating its 10th anniversary, and it seems Disney has allowed for the creation of some new Epic Mickey-themed t-shirts in honor of the milestone. A little strange to see all these shirts celebrating a franchise that seems to be done and dusted, but hopefully this is some small glimmer of hope for another installment down the line. You can check out the full catalog of Epic Mickey shirts on Hot Topic's website.