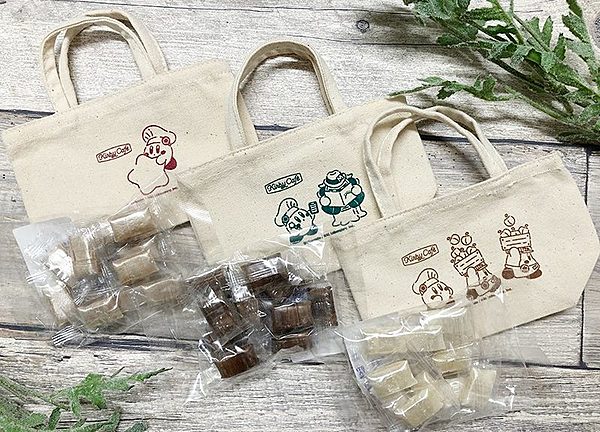 Turns out there's more to the Kirby mini tote bags from the Kirby Cafe than we first thought. The bags are great in and of themselves, but apparently there's candy stuffed inside each bag as an extra! Bags can come packed with apple cinnamon, molten chocolate, or apricot pudding candy depending on which you pick.

Shogakukan has released a series of Kirby picture books in Japan, with more on the way. While we haven't gotten a localization for any of these, at least we can get a better look at what one of the books is like. Check out an official read-through for one of the books above. 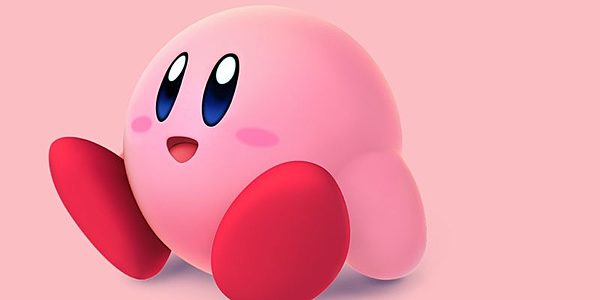 Nintendo Dream readers have once again voted on their favorite characters, and to the surprise of no one, Kirby has taken the lead. Check out the results for the March 2019 issue below.

Did you know that Super Kirby Clash features an ending theme with lyrics? If you didn't, now you do! Want to learn more about how the song was created? Super Kirby Clash director Yumi Todo shared the full details in a Switch News feature, which you can read below.

Hello! This is Yumi Todo of HAL Laboratory, Director of Super Kirby Clash.

This time round, I’d like to talk a little about the ending song.

I bet a lot of you are surprised to hear me call it a song. But it’s true! The theme that plays over the credits for this game has some singing in it. It’s called ‘Green Tree Memories from Kirby’!

The song was written by staff from HAL Laboratory. The lyrics came from General Director Shinya Kumazaki, while the melody was composed by Tadashi Ikegami, who in recent times has mainly worked in management, but has been in charge of sound design for Kirby since the early days of the series.

In the image you can see the first draft of the score and lyrics!

From this, we carefully went over the melody and lyrics, put in requests for a translation and a musical arrangement and finished putting the song together.

I think it ended up being a song full of the cuteness and attitude you’d expect from Kirby – just humming it is sure to put you in a good mood. You can hear the ending song at any point in the game by going to the options screen and viewing the credits, so by all means, listen to it as many times as you like.

If you decide to sing along too, I’d be very happy!

Chill beats to inhale enemies to
21 January, 2020 by rawmeatcowboy | Comments: 0 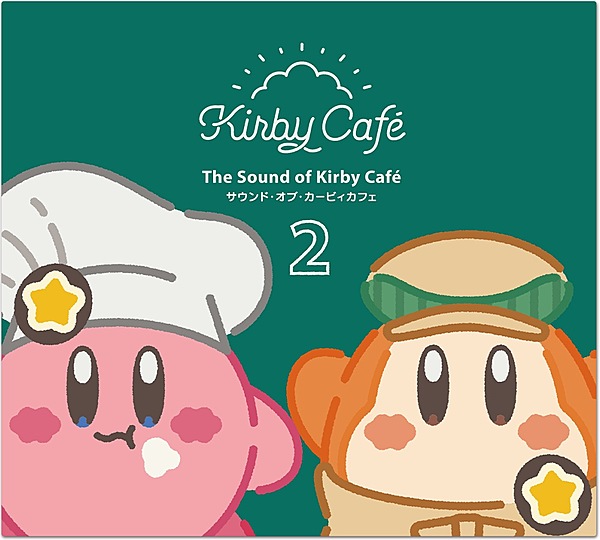 The soundtrack includes 15 different tracks, and is priced at 2,820 yen. This is the second CD released under the Kirby Cafe series.

New line of Kirby Cafe merch on the way

More items for your Kirby collection
18 January, 2020 by rawmeatcowboy | Comments: 0 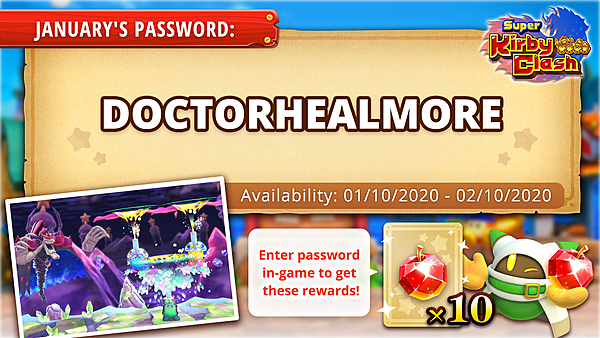 Still popping in on Super Kirby Clash from time to time? Nintendo has given another excuse to fire up the game one more time. They've distributed their special code for January 2020, which will net you 10 Gem Apples for free. Just use the code DOCTORHEALMORE and you're good to go! 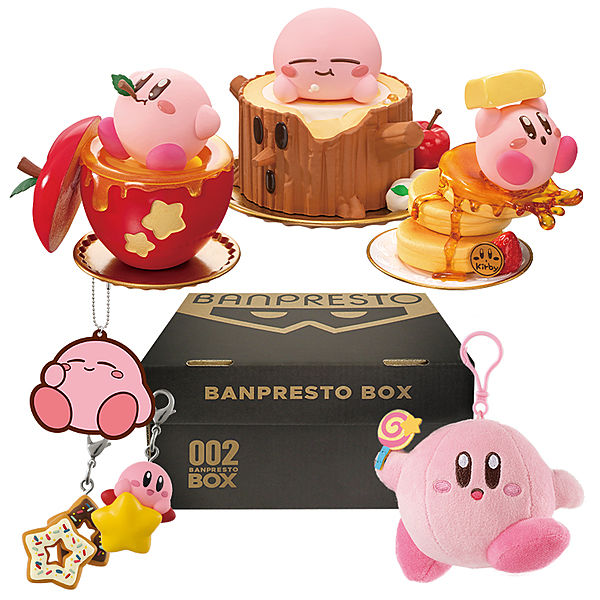 Jealous of Japan and all the amazing Kirby merch they get? Banpresto has come up with a solution to the problem, and it's only going to cost you $30.

The company is releasing the Kirby's Dolce Collectino box, which includes three pieces of the Kirby Paldolce collection. Along with that, the box also includes some keychains, and a plush doll. Preorders are open until Feb. 16th, 2020, and the boxes are set to ship sometime in July 2020. Lock in your preorder here!

Check out Mario and Kirby artwork celebrating the New Year 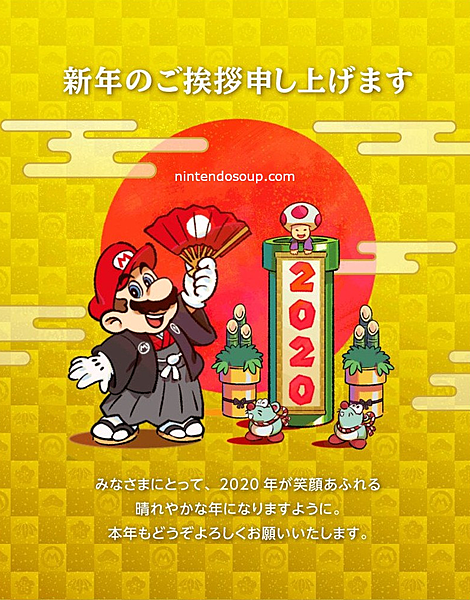 We have two pieces of New Year's art featuring Nintendo characters to share. First up is the image above, which was shared on the Switch news channel. It was posted with the following message.

“We would like to wish everyone a bright 2020 with full of smiles. Please treat us well this year!” 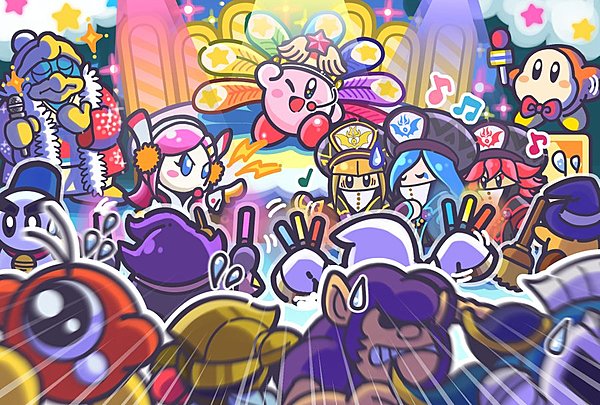 A special Kirby image was shared to celebrate the new year as well. It was posted alongside the following message.

“This year is finally over! In Dream Land, the “Popopo Song Battle” is held to end the year! Now the next contestant … It’s Kirby! ! What is that? Somehow the venue is in an uproar… oh, the guests! Please don’t go home yet! The song battle is still to come! !”

Sing along to this special inspirational music video to celebrate #SuperKirbyClash, available to play for free on #NintendoSwitch!https://t.co/5WUyWhOBf4 pic.twitter.com/NAylFKtv2d

Have you been wondering why Nintendo doesn't release more music videos? I think we all have, right? Well looks like Nintendo has been feeling the same way as well, as they've put out a new musical feature for Super Kirby Clash. Check out the 3-minute "inspirational musical video" for the free-to-start game above.