Father builds a Zelda: Breath of the Wild playhouse for his kids

The Legend of Zelda: Breath of the Wild gives fans an amazing virtual playground to explore, but wouldn't it be nice if some of that fun could be brought into the real world? That's what one father decided to do by creating a real-life playhouse styled after a home in Zelda: Breath of the Wild. Obviously this took a ton of work, but you can see how it all came together in the video above. The end result is pretty much spot-on, just scaled down for kids. I'm not going to lie...I'm really jealous!

Cadence of Hyrule's inside cover is absolutely bare in Europe

Nabbed a physical copy of Cadence of Hyrule today! So happy to see the NA version has interior art 🙏 Might dive into it this weekend! pic.twitter.com/4eRovosdZb

Over in Europe, the physical copies are a bit different. The inside cover for our European friends offers absolutely nothing. Just a blank, white pair of pages staring back at us. Seems a shame to not put something in there, especially for a Nintendo game. It's equally as odd that Europe got the shaft this time, as they usually have the better luck with inside cover art.

Did you know that the Divine Beast themes in Zelda: Breath of the Wild hide morse code S.O.S. signals?

Another secret hidden in plain sight
23 October, 2020 by rawmeatcowboy | Comments: 6 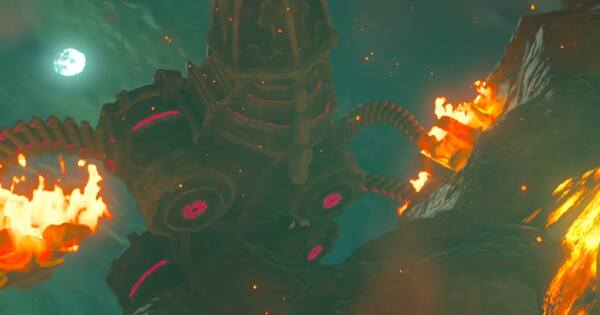 Zelda: Breath of the Wild is the gift that keeps on giving. There's so many little features tucked away inside the game it's insane, and some people are just discovering elements today.

Today's feature is one we actually covered in the past, but we lost the original post due to a hardware failure. Couple that with the recent re-discovery of this by some people, and I think we have a good enough reason to share a second time.

In Zelda: Breath of the Wild, the Champions were in desperate need of help in their battle, but they unfortunately didn't make it. While they may no longer be part of the living world, their spirit lives on, and their call for help from the Divine Beasts echoes out 100 years later.

In the video above, you can hear a compilation of the tunes that accompany each Divine Beast. Hiding in the background of the audio is a very distinct sound. Believe it or not, Nintendo incorporated Morse code for S.O.S. into the themes. It's very faint, but once you hear it, it's hard to ignore. In the video above, one of the best places to hear the very quiet tune is in the zero to three second mark. Listen very closely, perhaps with headphones, and you'll no doubt hear the distinct pattern.

If you need a reference for what Morse code sounds like, you can hear the regular version of the pattern here.

Another round of Hyrule Warriors: Age of Calamity screens released 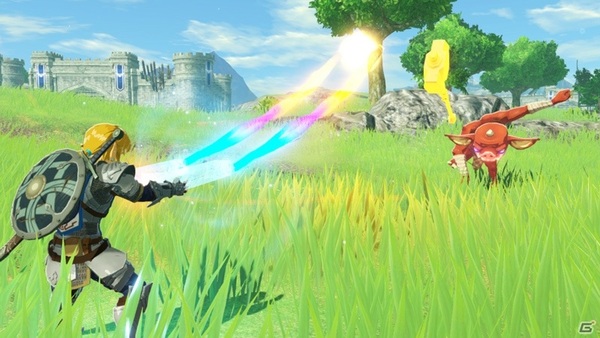 No, you're not looking at The Legend of Zelda: Breath of the Wild. The above is another screen for the upcoming Hyrule Warriors: Age of Calamity. A new batch of screens has been shared, and while we've showcased some of these as part of character breakdowns posted by Nintendo, there are a few others that are 100% new. You can sift through the gallery of screens here.

The physical version of Cadence of Hyrule: Crypt of the NecroDancer Featuring The Legend of Zelda launches today 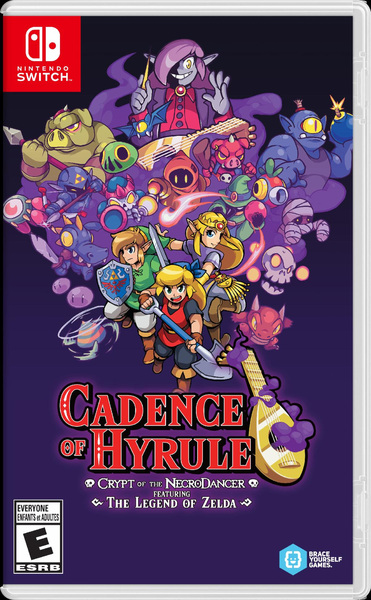 It's not often that we get a digital-only Zelda game, but that's what Cadence of Hyrule has been...until today! The musical adventure has finally made its way to retail, and it packs in all the extra DLC. Get a recap on that content in the press release below.

A Moblin approaches. You ready your sword.

A Green Lizalfos hops closer from the rear. The Moblin raises its arm to take a swing at you from the front. The thumping soundtrack kicks into overdrive. The bass drops and you spring into action with a glorious Spin Attack. The battle has begun.

The Cadence of Hyrule: Crypt of the NecroDancer Featuring The Legend of Zelda game for the Nintendo Switch system has a physical edition, which includes the base game along with all three DLC packs, and is now available for purchase at select retailers for a suggested price of $39.99.

Cadence of Hyrule: Crypt of the NecroDancer Featuring The Legend of Zelda is a rhythmic action-adventure from Nintendo and Brace Yourself Games. Charge through heroic Hyrule battles featuring characters from the Legend of Zelda series while attacking enemies to the beat of classic songs inspired by the games. The physical edition includes the base game along with all three DLC packs, which expand on the game’s content, characters and songs:

· Pack #1 – This Character Pack DLC adds five additional characters to the game’s cast, such as Shadow Link and Shadow Zelda, as well as extra modes, including the All Character Mode with a 21-floor dungeon.

· Pack #2 – The Melody Pack DLC adds 39 remixes from three different artists, so you can choose to play through the rhythmic adventure to the beat of your own drum.

· Pack # 3 – The Symphony of the Mask DLC introduces an additional map and story featuring the mischief maker Skull Kid, well-known for his puckish tricks in The Legend of Zelda: Majora’s Mask. Mix up Skull Kid’s abilities by swapping out different masks and uncover the mysteries that await Skull Kid in these strange lands.

With all this included content, there’s enough rhythmic action to keep you and the cast of Hyrule grooving through many grand adventures. This physical version is a great gift for the Legend of Zelda fans in your life, too! 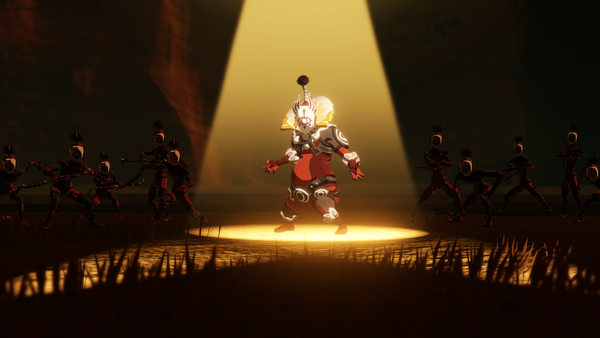 Three more character profiles for Hyrule Warriors: Age of Calamity have been shared. Check out screens, art, and info on the King of Hyrule, Hestu, and Kohga below.

- the musician of Korogu Forest who loves dancing
- he always carries his beloved Maracas, which contain Korogu fruits
- his dancing holds a mysterious power

- leader of the Yiga Clan
- spends all his time sleeping, leaving the fighting to his subordinates
- for some reason, all the clan members admire him 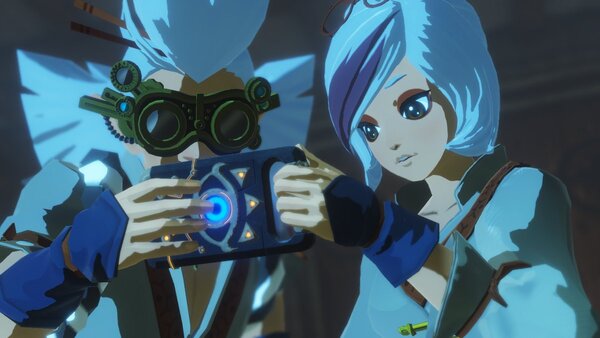 The official Japanese Twitter account for Hyrule Warriors: Age of Calamity has shared some new screens, art, and details for both Purah and Robbie. You can find the details on each character below.

- a Sheikah who leads the research of ancient relics
- Purah is Impa’s big sister and Robbie’s colleague
- she’s a brilliant scientist, but can get absorbed a bit too much in her studies, dragging everyone else into her research

- a Sheikah researcher involved in the excavation and study of ancient relics
- he’s the lead scientist on Guardian research, and is Purah’s colleague
- Robbie has a rock and rebellious mind, but tends to get dragged around by Purah

What new details can be gleaned?
19 October, 2020 by rawmeatcowboy | Comments: 1

Nintendo has dropped the third entry in the Untold Chronicles series of trailers for Hyrule Warriors: Age of Calamity! That means it's time once again we take out the old Analysis Machine to see what's hiding in this short trailer!

Mod allows you to play Zelda: Breath of the Wild using the Ring Fit Adventure Ring-Con

As the years roll on, people continue to find new ways to enjoy The Legend of Zelda: Breath of the Wild. The latest twist on the gameplay involves using a different controller altogether.

A new mod allows you to use Ring Fit Adventure's Ring-Con to play Zelda: Breath of the Wild, and as you might expect, it gives you one hell of a workout. From battling enemies to climbing towers, get ready to sweat your ass off!

In this video, Did You Know Gaming takes a look at some facts, secrets and history surrounding The Legend of Zelda games that never saw the light of day, including Wind Waker on GBA, Wind Waker 2, a Majora's Mask styled Twilight Princess sequel, and more.