Marvelous has released a trailer for the Rune Factory 5 “Premium Box” limited edition that launches in Japan on May 20th, 2021. This package includes a special box, Visual Book, Memorial Soundtrack Selection, and “Rune Factory 4 Bachelorette / Bachelor Costume Set” downloadable content. This package can be purchased for 9,980 yen. 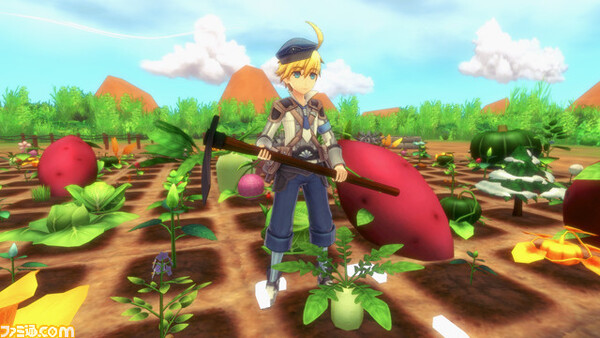 As we mentioned earlier today, Rune Factory 5 is heading to Japan on May 20th, 2021. There will be a standard edition for 7,678 yen, and a 9,980 yen Premium Box limited edition. The Limited Edition includes a copy of the game, special box, Visual Book, Memorial Soundtrack Selection, and “Rune Factory 4 Bachelorette / Bachelor Costume Set” downloadable content.

Following that news, a new round of details on Rune Factory 5 itself has been shared. Check out info on the game's setting, mechanics, characters, and more below.

Live in a Fantasy World

Rune Factory 5 is an RPG full of things to do, from interacting with the townspeople and finding love, to spending each day working on the farm and casting a line, and making use of weapons and magic to carry out your adventure.

The game offers a friendly, carefree design that allows even first-time players to easily jump into its world.

Your fantasy life in the world of Rune Factory is about to begin!

After losing their memory, the protagonist ends up in Rigberth, a town surrounded by nature, where they protect the peace as a member of the guard and adventure alongside their companions.

Tough monsters await outside of town. Make use of all sorts of weapons, magic, and combination arts with your companions to defeat them.

Grow vegetables and fruits on the farm, or do some leisurely fishing at the river. Communicate with the townspeople while enjoying life in the town.

You can choose between a male or female protagonist. If you find someone who catches you eye, take them on dates, fall in love, and get married, you might have a cute baby. 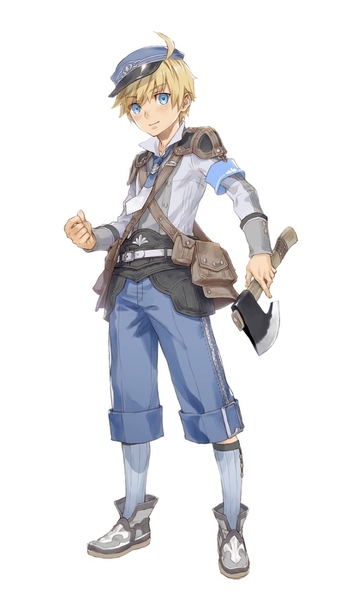 The protagonist—the player’s avatar—loses their memory and ends up in town, where they protect the peace as a member of the guard. You can choose between a male or female protagonist.

A young man who lost his memory and ended up in the rural town of Rigberth. With the townspeople that helped him in mind, he takes up an apprenticeship at Seed to protect the peace.

He is well-mannered and cannot ignore someone in need. He would not say he dislikes being relied on. He is a bit of an airhead. 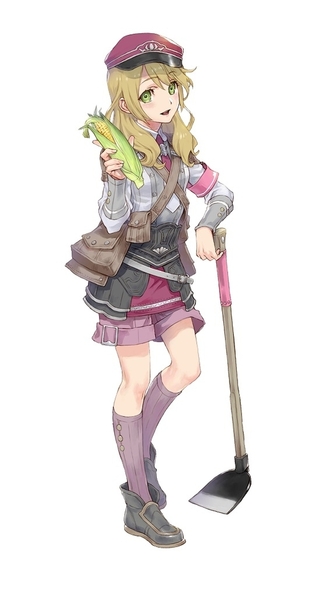 A young lady who lost her memory and ended up in the rural town of Rigberth. With the townspeople that helped her in mind, she takes up an apprenticeship at Seed to protect the peace of the town.

A kind girl who cannot ignore someone in need, even if it is inconvenient for her. She is full of curiosity and positivity. She is good at keeping an eye on the town as she walks around.

Various lovely women and charming men are waiting to meet you in town. 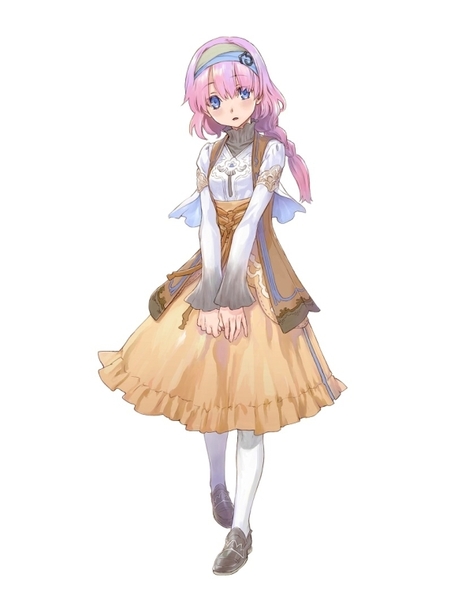 A kind girl, bright like the sun, who has lived in Rigberth since the day she was born. She messes up a lot in her day to day life, but is forgiven thanks to her natural cheerfulness. She can be unexpectedly reliable, such as when she prepares for everything in advance. She wants to overcome her fear of leaving town, which was caused by a certain incident. 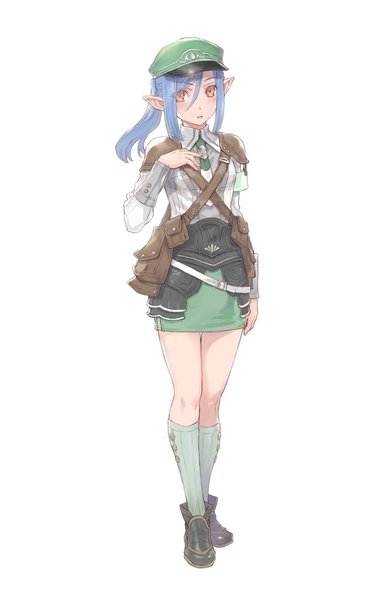 A half-elf girl and established member of Seed currently working far away from home. She is an elite who wants to follow in her father’s footsteps. Overly diligent and by the books. It annoys her when a discussion does not have a clear ending or suddenly changes subject. She is hard-headed, but is conflicted about whether it is OK to stay that way. 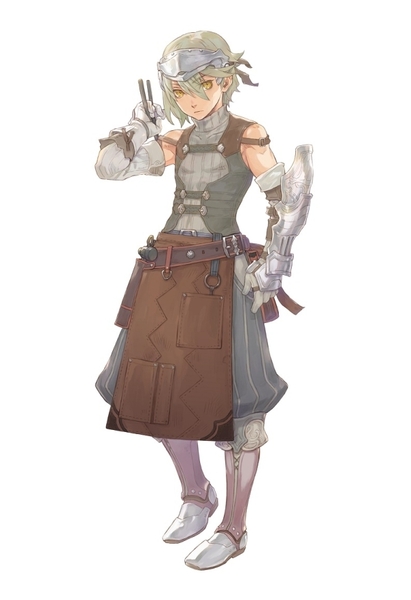 A young man who works as apprentice in hopes of becoming a top blacksmith. He does not talk much and takes pride in his work, but rumor has it that he secretly gives nicknames to his favorite tools. Since he is blunt, he is easy to misunderstand. He is always thinking about his craft, but his world changes when he meets the protagonist. 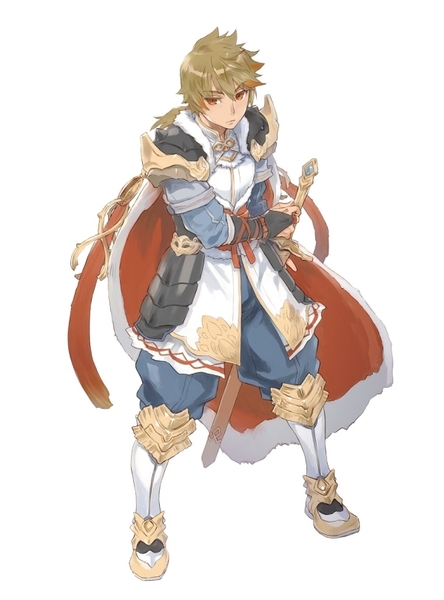 A young knight who has sworn allegiance to the Nohrad Kingdom. While talented and proficient in politics, his reason for visiting Rigberth is unknown. Though dutiful, rational, and intelligent, he refrains from forcing people to conform to his way of thinking, which earns him their trust.

However, the protagonist will be able to witness a different side to him.

All sorts of people live in the town of Rigberth. 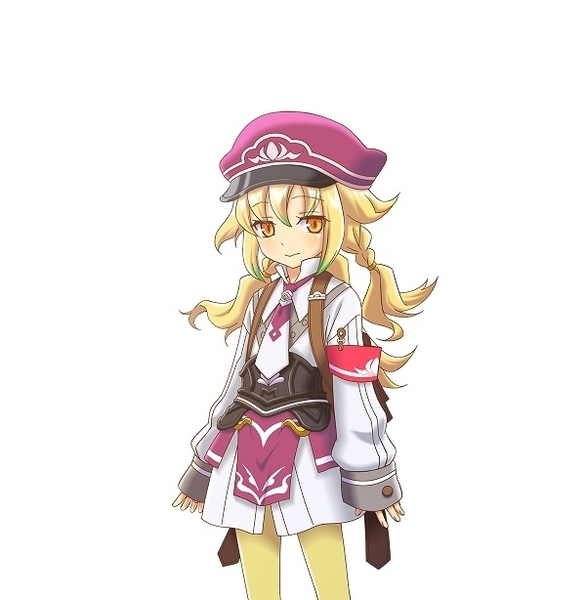 Head of Seed’s Rigberth Office. Despite her young appearance, there is something about her that comes off as quite old and elusive. She speaks sternly, but is caring and always lends a hand to those in need. 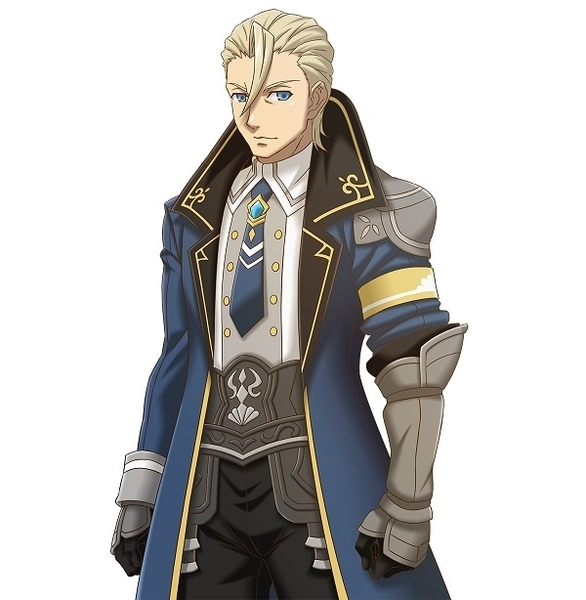 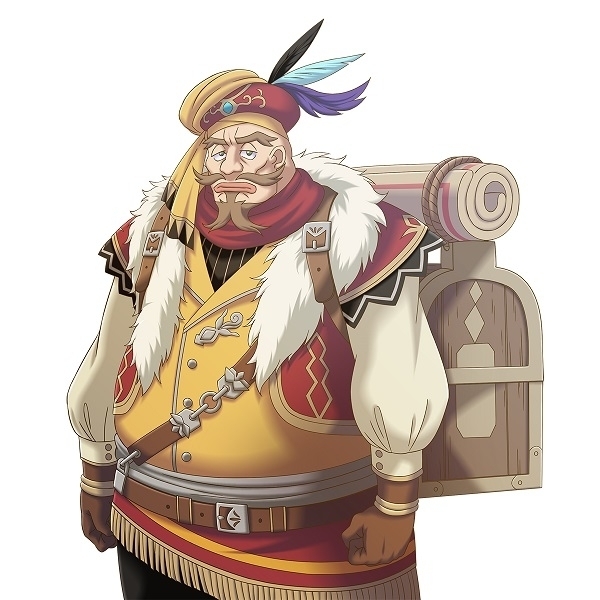 The head of a band of thieves made up of societal misfits and those with nowhere to go. It is said that wherever there is an incident, he will always be there. 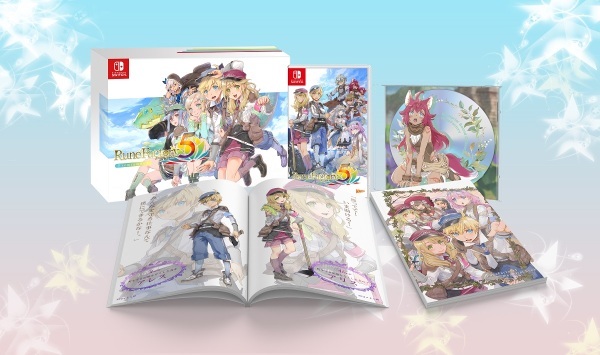 Available Physically and Digitally within Europe and Australia
28 February, 2020 by nintendaan | Comments: 0

As previously announced Rune Factory 4 Special will feature both English and Japanese audio languages as well as text localisation in English, French and German. In addition to the release of Rune Factory 4 Special the “Another Episode” DLC, which contains 12 new storybook-style episodes narrated by the game’s marriage candidates, is now available to download from the Nintendo eShop for FREE for four weeks. Once this promotional period has ended the “Another Episode” DLC will then be made available to purchase from the Nintendo eShop for £4.49 /€4,99 / $7.50 AUD.

Those looking to commemorate the release of Rune Factory 4 Special can also purchase the definitive version of the critically acclaimed title, known as Rune Factory 4 Special - Archival Edition, from the Marvelous Games store. This edition will contain a variety of memorable content, including an art book commemorating the work on the entire Rune Factory series, as well as a soundtrack CD consisting of 36 tracks.

▪ 160-page A5 sized art book featuring the works of Minako Iwasaki with an original cover illustration.

▪ Official soundtrack CD consisting of 33 tracks from the original release, plus 3 new tracks

▪ Premium custom box with an original illustration by Minako Iwasaki

Archival Edition’ for Nintendo Switch is available to purchase from the Marvelous Games Store, while the standard edition is now available physically at selected retailers and digitally from the Nintendo eShop. This game has been rated PEGI 12, USK 6 and PG.

The curtain rises on a beautiful sunny day, as the hero tumbles from the heavens… After being saved by the dragon Ventuswill, the hero comes to live in the local castle as a newly designated ruler and begins life anew while developing the town, making difficult decisions, and cultivating the soil. While exploring a nearby forest, the hero encounters and defeats a monstrous butterfly. Left in the fallen monster’s place is a mysterious young girl. Seeking the answers as to why, the hero’s search for the truth will lead to a grand adventure that will shake the very foundations of their world...and draw them closer to the secret buried in their own lost memories.

In this standalone story, players choose to play as a male or female hero and will encounter a diverse cast of potential suitors and other loveable townsfolk. As the newly-appointed prince or princess, royal duties are fulfilled by issuing orders to help the town prosper, or by taking a more relaxed approach to governance by raising crops and helping townsfolk. Should some dungeon adventuring be on the day’s itinerary, a vast array of weapons along with magic can be crafted or bought for battle against dangerous foes—companions or friendly monsters can also join to aid the player during their travels.

Published in Europe and Australia by Marvelous Europe Limited, Rune Factory 4 Special ‘Archival Edition’ for Nintendo Switch is available to purchase from the Marvelous Games Store, while the standard edition is now available physically at selected retailers and digitally from the Nintendo eShop. This game has been rated PEGI 12, USK 6 and PG.

XSEED says Rune Factory might be their best-performing franchise currently, and they're still shipping copies of Rune Factory 4 on 3DS 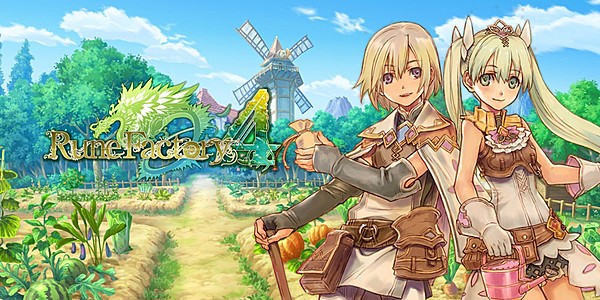 XSEED has a number of Japanese franchises under their belt, but some are bigger than others. In an interview with GamesBeat, XSEED's Ken Berry is asked about the top franchise the company has right now, and he believes it to be Rune Factory. Apparently the franchise is still doing considerable business on the 3DS as well!

I’d say it may have to be Rune Factory right now. Based on the great success that Rune Factory 4 had on the 3DS, we ended up doing more than 250,000 units, between physical and digital, since it launched in 2013. And even now we’re shipping more 3DS product of Rune Factory 4, and then the upcoming Rune Factory 4 Special, the HD remake for the Switch, there’s a lot of excitement about that. So I’d say is our biggest franchise right now.

The factory is open for business once again
25 February, 2020 by rawmeatcowboy | Comments: 0

The physical limited Rune Factory 4 Special ‘Archival Edition,’ commemorating the definitive version of the critically acclaimed title, is available alongside the standalone physical edition at the XSEED Games Store and other participating retailers for a MSRP of $59.99 and $39.99, respectively. The ‘Archival Edition’ includes a download code for the ‘Swimsuit Day’ DLC, a special in-game Order decreeing that all marriage candidates wear their swimsuits. Previously available as a preorder incentive, the ‘Swimsuit Day’ DLC will not be sold separately on the Nintendo eShop. The standard digital edition can be purchased on the Nintendo eShop for Nintendo Switch for $39.99.

Rune Factory 4 Special is a remastered version of the critically acclaimed RPG simulation title that has sold over 300,000 copies in North America and Europe since launching on Nintendo 3DS in 2013. The updated Switch version adds brand new content such as ‘Newlywed Mode,’ self-contained adventures unlocked after marrying the character of your dreams.

Journey to the vibrant world of Rune Factory and experience the legendary fantasy farming adventure like never before! 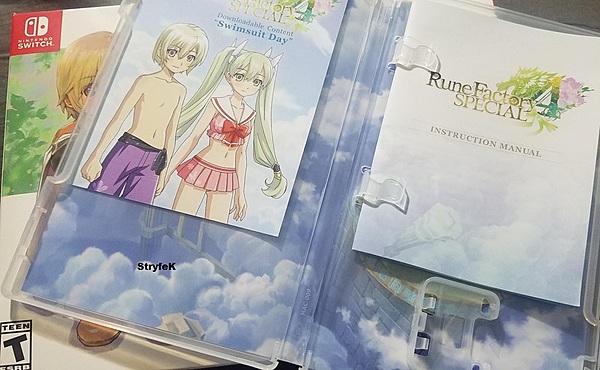 Despite first glance at the picture above, the instruction booklet included inside is actually quite robust. It's 41 pages of characters, controls, gameplay mechanics, credits, and more.

XSEED has released a pair of trailers for Rune Factory 4 Special today, which give us a look at the various bachelors and bachelorettes you can find in the game. Along with that, they've released the first 'Earthmates' profile, which you can see below. 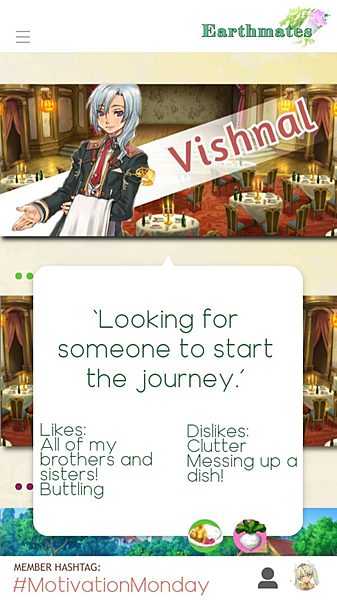 Welcome to Selphia, a region ruled by the Native Dragon Ventuswill...and you! Start an exciting new life in the village and embark on a grand adventure!

Localization is no easy task
28 January, 2020 by rawmeatcowboy | Comments: 0

XSEED and Marvelous have teamed up to release a special localization blog for Rune Factory 4 Special. This blog gives a detailed look at the challenging process of localizing the game. Check out a snippet from the blog below, and then click over for the full thing.

The Western release of Rune Factory 4 Special has been in development for about a year as of this writing. For most of us at XSEED Games, this is our first time working on the game in any capacity (though some of us had played it, of course!), so throughout the localization of the game’s new material and the QA process, we’ve had the chance to fall in love with the world of Selphia and the game’s many wonderful characters. Working on a title with such a strong localization has been a humbling experience, and we wanted to make sure to do it justice for all its fans.