Before you set off on your grand adventure in the Galar region, play in this special #PokemonSwordShield themed #Tetris99 MAXIMUS CUP! Earn at least 100 event points to get this custom theme. @Tetris_officialhttps://t.co/jrWEmtmcey pic.twitter.com/vsupyEejoF

The next big Tetris 99 Maximus Cup is coming on Nov. 7th, 2019, and it's Pokemon Sword and Shield themed. As usual, if you earn yourself 100 event points, you can get a custom Galar Region theme.

Thanks to Andreslop24 for the heads up!
Rating: 1 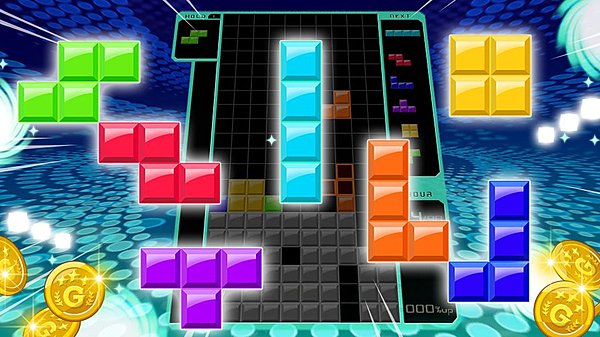 Nintendo has revealed the next Smash Bros. Ultimate Spirit Board event, and it kicks off Oct. 25th, 2019. This is a 'Tetris Smash' event that runs for 5 days, and features 5 new spirits from Tetris 99.

Thanks to Andreslop24 for the heads up!
Source: Link
Rating: 6 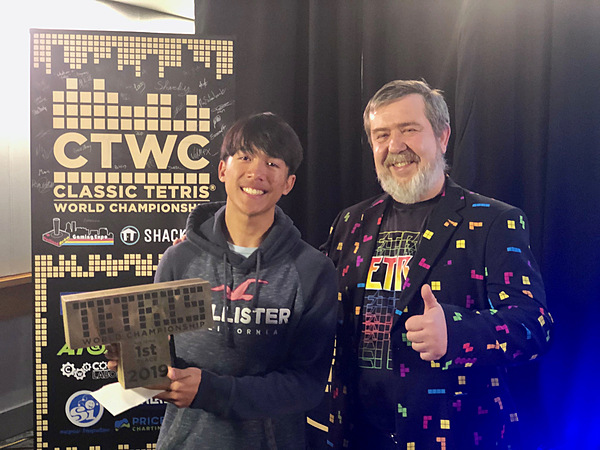 The Classic Tetris World Championship (CTWC), now celebrating its 10th anniversary, is complete. Following two days of intense competition, returning 2018 champion Joseph Saelee, of California, out bested opponents for the win at the annual event which took place this weekend at the Portland Retro Gaming Expo at the Oregon Convention Center.

As a special surprise to the winners, Alexey Pajitnov, the creator of Tetris®, was on hand to witness the finals, congratulate winners and hand out the awards.

Created by avid fans of the 1989 Nintendo Entertainment System™ (NES) version of the game, CTWC is known as one of the premier competitions by top ranked Tetris players from around the world, including the United States, Europe, Australia and Asia. In addition to Saelee, this year’s competitors included Jonas Neubauer (2010, 2011, 2012, 2013, 2015, 2016 and 2017), Harry Hong (2014), European champion Svavar Gunnar Gunnarsson, Japanese Tetris Grand Master Koryan, and many other players featured in the award-winning documentary Ecstasy of Order: The Tetris Masters.

The event took place this weekend with qualifying rounds and an intense, final 48-bracket seeded tournament, which took place today.

To help celebrate the CTWC’s 10th anniversary, The Tetris Company, Inc. sponsored the event with $10,000 in cash prizes. As champion, Saelee was awarded $3,000 in prize money and the coveted CTWC trophy. Second place winner Koryan was awarded $1,500. Third place winner Batfoy, of Minnesota, and fourth place winner DanQZ, of New Jersey, each received $750. $500 prizes were awarded to contestant who ranked fifth through eighth place, and $250 for those who came in ninth through sixteenth place. Additionally, Super Impulse and Paladone outfitted competitors with new licensed Tetris products including Tetris Micro Arcade units and Tetrimino Light kits, respectively. 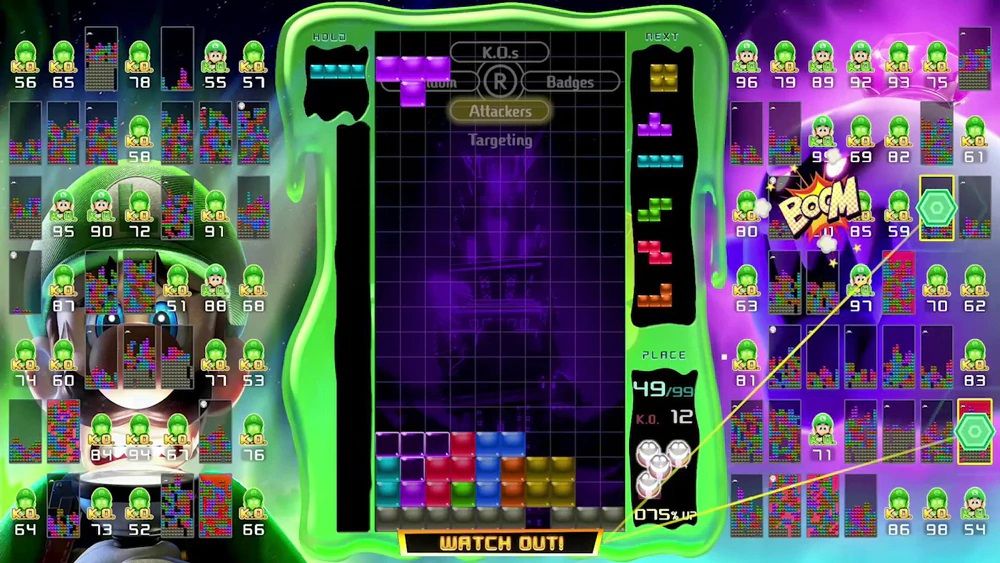 On October 25, Tetris 99 players can participate in the eighth Maximus Cup/Grand Prix. The upcoming event will be Luigi's Mansion 3 themed with Gooigis and Pulterpups representing the KOs. If you net yourself 100 points, you will keep the new theme permanently. The battle ends on October 29.

Herzogenaurach, Germany, October 17, 2019 – Sports company PUMA has created a collection celebrating TETRIS®, one of the most recognizable video games in history, with shoes and apparel that feature the iconic Tetrimino playing pieces.

Ingeniously simple and timelessly engaging, TETRIS®, which was created by Russian video game designer Alexey Pajitnov, has been a favourite among video gamers of all ages since its debut in 1984.

The PUMA x TETRIS collection includes PUMA’s future-retro sneakers RS 9.8 and RS-X in daring colors inspired by the game, with falling Tetriminos sprinkled across the heel. Reflective trimmings and a 3D heat-cut TETRIS® tongue logo add to the striking look of the RS-X. The phrase “HARD DROP” printed on the RS-X’s 3D heel is a nod to the command in the game, which makes the Tetriminos land instantly.

To get that geometric glow, the PUMA x TETRIS collection, available for adults and kids, drops globally on PUMA.com, PUMA stores and select retailers on October 17.

Who will be the classic Tetris king this year?
14 October, 2019 by rawmeatcowboy | Comments: 0

WHAT: On October 18-20, the 10th annual CTWC, a tournament organized by avid Tetris fans, returns at the Oregon Convention Center during the Portland Retro Gaming Expo, where Tetris masters from around the world compete against each other playing the 1989 NES version of the Tetris game for a chance to win the coveted CTWC trophy and their share of $10K in total cash prizes. Competitors will include returning champions Joseph Saelee (2018), Jonas Neubauer (2010, 2011, 2012, 2013, 2015, 2016 and 2017), Harry Hong (2014), European champion Svavar Gunnar Gunnarsson, Japanese Tetris Grand Master Koryan, and many other players featured in the award-winning documentary Ecstasy of Order: The Tetris Masters.

Entry fee for the CTWC is $20. Entrants can make as many qualifying attempts as time permits. For details, prizing and rules for all tournaments, please visit http://thectwc.com/rules/.

The CTWC finals will be livestreamed on Sunday, Oct. 20 at https://www.twitch.tv/classictetris 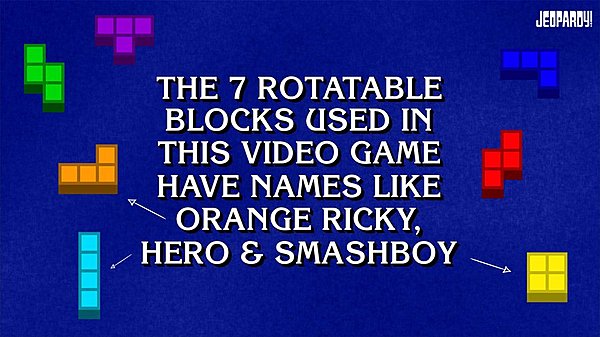 Looks like Jeopardy! fell for an old Tetris meme during last night's episode. The show had a video game-themed category, and it included the Tetris question above. Unfortunately, as funny as the names are for Tetriminos, they are completely fake. It came about as part of a very successful joke from years ago, and it seems to have stuck! 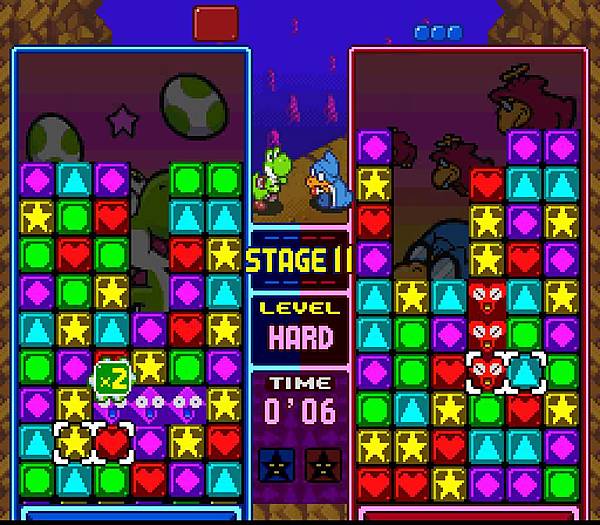 Platinum has up a massive blog featuring an interview with Hideki Kamiya. The blog takes a look at Hideki's career, as well as all the different games he enjoyed while growing up. In part of the interview, Kamiya discusses his affinity for Tetris Attack.

Turns out Kamiya and a lot of other devs played Tetris Attack a great deal back during his Capcom days. Kamiya was involved with development of the original Resident Evil, but it seems sometimes Tetris Attack would get in the way of dev team's work!

When I was working on Resident Evil, Tetris Attack was really popular at the office. We’d play against each other every day, to the point where work got ignored and Shinji Mikami had to put out an order banning Tetris Attack.

I'm sure there had to be a delay or two for Resident Evil. If there ever was, now we can blame some of that on Tetris Attack!

We're celebrating the release of the free-to-start Super Kirby Clash game for the Nintendo Switch system with a special Tetris 99 MAXIMUS CUP event! In this event, players will compete in online battles and collect at least 100 event points to unlock a new Super Kirby Clash in-game theme for the Tetris® 99 game, plus 99 Gem Apples that can be used in Super Kirby Clash.