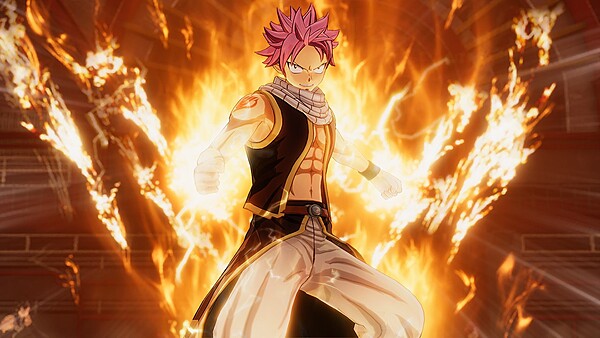 The long wait is finally over, and Fairy Tail has been released for the Switch. If you want to get yet another look at the game before jumping in on a purchase, you can sift through the latest gallery of screens and art to release. Check out that content right here.

Today, KOEI TECMO Europe and developer GUST Studios released their spellbinding JRPG, FAIRY TAIL, on the Nintendo Switch™, PlayStation®4 computer entertainment system and Windows PC via Steam®. The game, based on the anime and manga of the same name by Hiro Mashima, marks the first time a FAIRY TAIL game has been released on home console in the West!

FAIRY TAIL invites players to re-live, or experience for the first time, the series’ enchanting storyline from the popular Tenrou Island arc through to the Tartaros arc, along with all-new never before seen story and quest elements. The magical world of FAIRY TAIL is brought to life with remarkable detail throughout this all-new gaming experience, with phenomenal focus on delivering the type of magic and mystique fans of the worldwide sensation anime and manga series have been craving.

Throughout their journey, players will be able to form their dream five-mage battle party from a selection of over 16 iconic characters, including: Natsu, Lucy, Gray, Erza, Wendy, Gajeel, Juvia, Rogue, Kagura, Sherria, Sting, Ichiya, Laxus, Mirajane, Jellal and Gildarts. The character’s unique magic abilities from the series are brought to life within the game, including Unison Raids where characters can combine together to unleash their magic spells at once and overpower enemies. Even Extreme Magic Spells can be used, including Kanna’s Fairy Glitter – which can be activated when magic attacks are combined – to get the upper hand in battle.

Outside of combat, FAIRY TAIL allows players to develop their relationships with their guild mates, experiencing new story interactions as well as strengthening their magic abilities. Players will even be able to upgrade different areas of the Fairy Tail guild, and as they improve their guild, take on requests, and develop their relationships with their allies, they are able to restore the guild’s ranking to No. 1 in Fiore.

FAIRY TAIL is available now! Purchasing any version of the game, physically or digitally, within a limited time from launch will also unlock the Early Purchase Bonus special ‘Miss FAIRY TAIL’ costume for Erza.

A game based on the popular "FAIRY TAIL" is available on Nintendo Switch™ for the first time!

Fairy Tail producer on why the game is a turn-based RPG, and total playtime

Insight from the producer
29 July, 2020 by rawmeatcowboy | Comments: 0 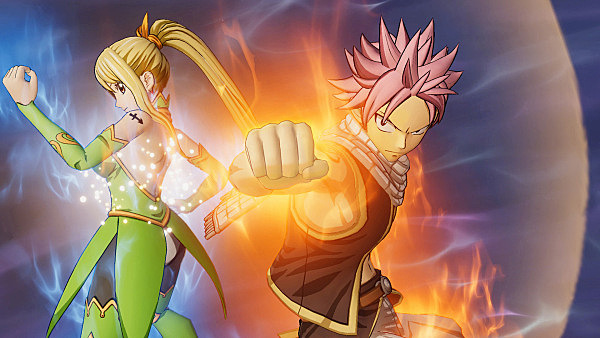 Fairy Tail is finally releasing on July 31st, 2020 after quite a lengthy delay. In a lead-up to launch, Gematsu had the chance to talk to producer Keisuke Kikuchi about various aspects of the title. First up, Kikuchi explained why Fairy Tail is a traditional RPG instead of an action-RPG.

Kikuchi also talked about the total playtime players can expect.

It will take roughly 20 – 30 hours to complete the main story, and there is content that players can tackle after that as well. For example, there are high level S rank quests, and a very strong character that did not join Natsu’s party in the original manga or anime. We really hope that players have fun with all of this end game content.

Beautiful new trailer for the 21st entry in the Atelier series!
29 July, 2020 by nintendojam | Comments: 0
Check out the official website for more details and screenshots!

Burlingame, Calif. – July 29, 2020 – KOEI TECMO America and developer GUST Studios are proud to share the first details on the recently announced Atelier Ryza 2: Lost Legends & the Secret Fairy, including exciting new gameplay abilities and the first storyline teases. This magical JRPG is set to launch across North America this Winter for the Nintendo Switch™, PlayStation®4 computer entertainment system, and Windows PC via Steam®.

In Atelier Ryza 2: Lost Legends & the Secret Fairy, Ryza returns for an all-new adventure, this time set three years after her heroic efforts in Atelier Ryza: Ever Darkness & the Secret Hideout. This dynamic sequel revolves around Ryza’s journey to the Royal Capital of Ashra-am Baird as she explores ancient ruins while seeking the truth behind the mystery of the lost legends. Along the way, she will be able to learn a number of new skills to help her successfully navigate the dangers of her surroundings, including the ability to swim. Ryza’s newfound swimming techniques help her not only discover aquatic materials but also the entrance to an underwater dungeon.

Throughout her journey, Ryza will once again be joined by her fun-loving group of mischievous friends. The first of these old companions confirmed for Ryza 2 is Klaudia. The only daughter of a merchant family, Klaudia has been working in the Royal Capital, but all the while, thinking back to the adventure she had with Ryza three years prior. Klaudia still has the desire to live a more exciting life, and now finds her fate once again intertwined with Ryza as they regroup inside the Royal Capital. Also joining Ryza this time around is a mysterious creature known as Fi. The creature doesn’t speak, but is very expressive and full of emotion, bonding quickly with Ryza while helping her seek answers to the true meaning of the lost legends.

Along with the new gameplay details, KOEI TECMO also revealed that gamers who purchase a physical or digital copy of Atelier Ryza 2: Lost Legends & the Secret Fairy during the first two weeks of release will receive an Early Purchase Bonus code for the Summer Fashion Costume Set. In addition, gamers who have save data from Atelier Ryza: Ever Darkness & the Secret Hideout will be able to unlock the Classic Costume Set, including outfits for Ryza and her friends from the previous title.

Koei Tecmo has released the debut trailer for Monster Rancher 2, which was previously announced for Switch. The game is set to release in Japan sometime in Fall 2020, and is priced at 2,820 yen. 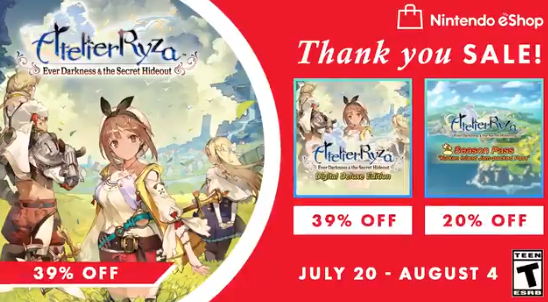 Those interested can get Atelier Ryza: Ever Darkness & the Secret Hideout for 39% off its regular price until Aug. 4th, 2020, which makes it just $36.59. Along with that, if you own the game, you can get the Season Pass content for 20% off as well.

KOEI TECMO America and developer GUST Studios are excited to announce the latest game in their fan-favorite Atelier franchise: Atelier Ryza 2: Lost Legends & the Secret Fairy. This magical JRPG is set to launch across North America this Winter for the Nintendo Switch™, PlayStation®4 computer entertainment system, and Windows PC via Steam®.

Atelier Ryza 2: Lost Legends & the Secret Fairy is a direct sequel to the best-selling Atelier Ryza: Ever Darkness & the Secret Hideout, a worldwide smash hit that has already shipped over 420,000 copies to date. In this latest entry in the Atelier series, Ryza makes her triumphant return as the protagonist, making franchise history as the first character to take on the hero role in two successive titles.

Gust discusses the visual and UI improvements made to Fairy Tail 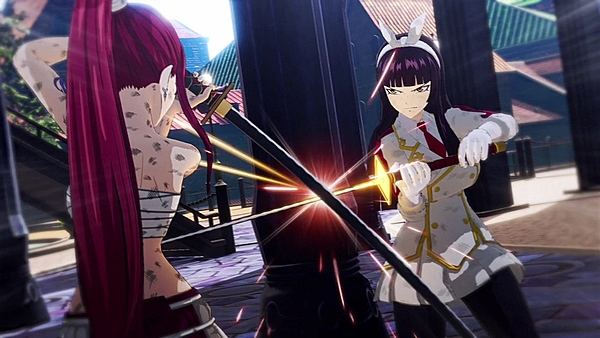 Fairy Tail ended up being delayed for a considerable amount of time, but the game is finally seeing launch on July 31st, 2020. In an interview with NintendoEverything, Gust detailed how that push back helped allow for visual and UI improvements.

In regards to the visuals, we’ve upgraded the background lighting and object behavior. As a result, the game’s atmosphere was greatly improved thanks to the subtle movement of flags and plants and more realistic lighting. Each character received additional animations, allowing them to appear more lively and giving them a greater sense of presence. For the UI, we repeatedly test played the game to make UI adjustments since we wanted to ensure that in battles, which are played the most, the UI was both more functional and looked cooler. 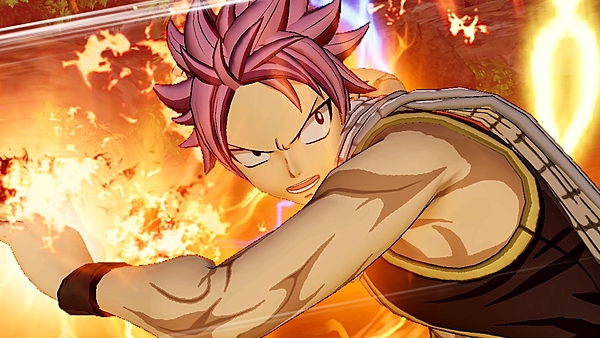 Fairy Tail is coming to all current-gen platforms, Switch included. Wondering how the game runs on Switch? Check out a rundown of the details below.