This is a project that has been years in the making, and the final track has finally been wrapped. One truly dedicated Donkey Kong Country fan has been going through the entire soundtrack to the game and restoring each track to its studio quality. This was made possible by locating the sounds from the original workstation keyboards and drum machines, applying them to the original compositions, and removing the compression that was unavoidable on the SNES.

While YouTube still adds in a level of compression, what you're hearing here is much closer to what the original composers put together before they brought the songs down to the SNES. The end result definitely retains the feel of the SNES tracks, but with much higher fidelity.

The above track is just the first tune in the soundtrack. Click here to enjoy the full playlist! Thanks to Jonathan for the heads up!

In Part 2 of our Donkey Kong Country 25th anniversary celebration, we talk to DKC's character designer, Steve Mayles, and lead programmer, Chris Sutherland, to get even more behind-the-scenes details, including info on DK's missing hat, why he has 4 fingers instead of 3, and what exactly makes Donkey Kong Country's graphics tick. All this and tons more in our 25th anniversary discussion (including a few bonus questions about Yooka-Laylee and the Impossible Lair!) 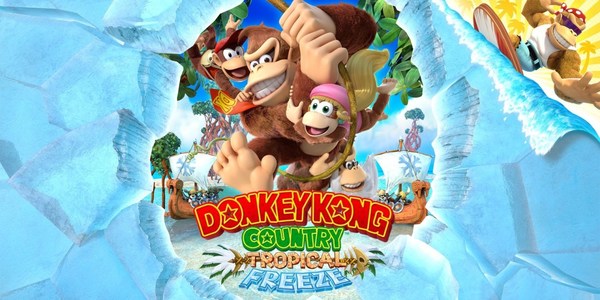 The following reviews and impressions are of the Nintendo Switch version for Donkey Kong Country: Tropical Freeze:

Donkey Kong Country: Tropical Freeze was one of my absolute favorites on Wii U, and that is the same on Nintendo Switch. The levels inspire me to push harder to master them. Now combine that with a fun cast of characters and a terrific presentation, and you have the funkiest of the bunch. If you are playing it for the game, please do yourself a favor and play it in original mode first. The challenge may be harsh, but you get a real idea of what makes this game oh so special. For everybody else (or those who lack platforming skills), Funky Kong all the way baby. - Nintendo World Report

There's no doubt about it, Donkey Kong Country: Tropical Freeze is one of the most refined and enjoyable platformers money can buy. The levels are all beautiful - not only because of their delightful new 1080p resolution, but also their structure; the characters move with fluidity and brilliant responsiveness, and the inclusion of Funky Kong brings balance for those who have less experience with brutally tough platformers. It’s so well-made that it’s almost too well-made; there's an absence of a certain 'rough-and-ready' charm found in the original DKC trilogy. This is, however, a complaint so minor it's practically insignificant. Donkey Kong’s first appearance on Switch is streamlined, rewarding, and immensely good fun; any fan of 2D platformers simply has to get this game. - Nintendo Life

This new classic still maintains its fantastic, ever-changing sense of level design, and the cast here is at their most adorable. This follow-up, with its absurd Snomad clan foe, has almost no business topping Returns, but it simply does in just about every regard. The nuances of each character play very nicely with the layout of each level (Cranky's pogo stick, Diddy's slight rocket boost, and Dixie's glide all feel perfect), to the point where nearly each jump feels deliberately crafted. Once again you're free to play Tropical Freeze the way you want, whether it's running through each stage and stomping your way to the exit, or meticulously searching for every hidden portal or collectible. Donkey Kong Country: Tropical Freeze is a platformer that needs to be experienced by as many people as possible. - Destructoid

Tropical Freeze isn't a heavy-hitter from Nintendo in the same way Breath of the Wild or Super Mario Odyssey are, but it's a fantastic platformer that's bursting with creativity and expertly designed challenges. It's tuned just right--always tough but rarely frustrating--to ensure that even the most common moments feel great. If you missed out when the game first debuted back in 2014, give it a shot today. It easily stands the test of time. - GameSpot


It Only Takes a Minute To Summarize Metal Gear Solid’s Story
Rating: 2

20 February, 2012 by rawmeatcowboy | Comments: 0
We still have no idea why Donkey Kong Country was removed from the Wii Shop Channel, but the good news is that it's already back online for all to download. Good to know it wasn't a permanent removal! Thanks to KingBroly for the heads up!
Rating: 4