The ultimate Nintendo fan (Matthew Taranto) teams up with Nintendo’s own Gamemaster (Howard Phillips) to make a tell-all book!

Howard got his start at Nintendo unloading thousands of Donkey Kong arcade machines into a warehouse, but within a decade became Director, Game Creative and "Gamemaster" - a sort of corporate mascot for the company. You might recognize him from Nintendo Power's Howard & Nester comics! Well, the Gamemaster is back to dole out info in a tell-all book about his mostly fun-filled 10 years at Nintendo of America (NOA)! From behind-the-scenes secrets to his own personal reviews of over 100 games, Howard's ready to prove what we always knew--that knowledge is (Nintendo) power!

Both Howard and Matthew turned to Kickstarter to fund the project, and it's already reached its funding goal. You can still kick in some cash and help hit stretch goals here. 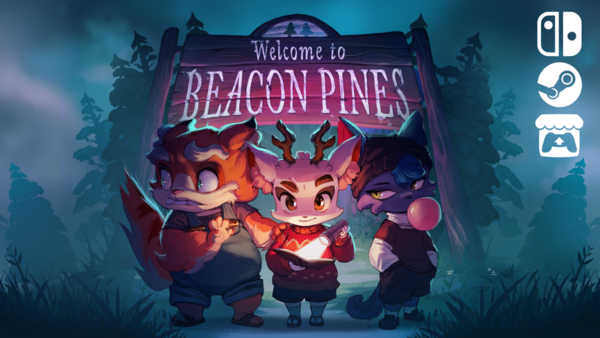 We shared news about the Beacon Pines Kickstarter last week, and now we have even better news to share. The team behind the game was looking for $30k to bring the game to Switch, and they've manage to hit that goal easily. There's still 24 days left on the Kickstarter, leaving plenty of time to hit stretch goals. Read a bit about Beacon Pines below, then click over to kick in some cash!

Beacon Pines is a cute and creepy adventure game within a magical storybook. You play as both the reader of the book and its main character, Luka. Explore the world to find word charms. Use your charms to change the course of fate!

Beacon Pines is a cute and creepy adventure game within a magical storybook. You play as both the reader of the book and its main character, Luka. Explore the world to find word charms. Use your charms to change the course of fate! Normal isn’t what it used to be. Glowing trees, shady corporations, running for your life, and never knowing who to trust. Welcome to Beacon Pines!

Like what you see in Beacon Pines? You can help bring it to Switch by pledging to the Kickstarter. The team wants just $30k to make that happen, and they're already halfway there! You can kick in some cash of your own here.

We've got another Kickstarter hit!
02 February, 2021 by rawmeatcowboy | Comments: 0

Kingdom Gun is a Roguelite Shooter with elements from RPGs and action platformers! You are sent by The Kingdom to explore and conquer a recently discovered continent. Your reason for exploring the continent depends on the character you choose! Loot, glory, conquest, vengeance, or just for fun! Every run is different! Permanent death and item randomization! Every run allows for endless progression. Play Online with friends or solo!

The team behind Kingdom Gun was looking for just $15,000 to fund their game, and they managed to pull that in no problem. Now the game is confirmed for release on Switch, but we don't know a release date yet. The team is aiming for October, but that's not a given.

There's still 26 days left on the Kickstarter, so plenty of time to get in on funding and help the game hit some stretch goals. You can check it out here.

Will this one happen the second time around?
28 January, 2021 by rawmeatcowboy | Comments: 1

There was already one Kickstarter for Humans Took My Neighbors!, but that one failed to meet its goal. A second Kickstarter has launched, and the goal this time around is actually higher than the first. The team is looking for just shy of $14k to make the game happen on Switch, and you can get some details on the project below.

'Humans Took my Neighbors is a top down action game , set in a world of monsters who are trying to stop the human invasion. The game is inspired by classic snes and mega drive top down games, and especially some of my favorite games Zombies Ate my Neighbors and 2D Zelda. Developed by one guy looking to create a fun and exciting adventure with a touch of humor and challenge.

A new adventure game is making its way to Switch soon. NUTS is coming on Feb. 4th, 2021, and will have a 15% launch discount. To see what the game is all about, read the official press release below.

Publisher Noodlecake and the tight-knit indie team behind the visually striking, single-player adventure NUTS are excited to announce that it will be releasing on Nintendo Switch and Steam on February 4th for $19.99 USD / €19.99 / £ 17.99 with a 15% launch discount, following its initial release on Apple Arcade on January 22nd.

"We grew NUTS into a game from a series of design experiments, and feel lucky that we were able to chase those into a finished game. All along, what has driven us to make this game is love and mischief. And we hope that all NUTS players will experience the joyful hum of our team as they play our game. The wonder of a new world. The peace of a quiet life. The joy of chasing squirrels. And the ever-present knowledge that out there in the real world, beyond our cozy bubbles, all is certainly not as it seems..." says Joon Van Hove, a member of NUTS' development team.

NUTS is a single-player squirrel surveillance mystery set in the remote depths of the Melmoth Forest. As a rookie field researcher, you’ll carefully place cameras during the day, and watch the footage at night, tracking the movements of a scurry of squirrels.

Where do they hide their nuts? What puzzling routes do they take? And why do they behave so strangely?

Experiment to determine the optimal layout for your observation equipment and capture the behaviors of Melmoth’s squirrels.
Enjoy an intimate, immersive story with full voice acting.
Take in the bold visuals and foley sound effects that envelop you in a vibrant forest.

TY the Tasmanian Tiger™ 2: Bush Rescue™ is the sequel to Krome Studios' charming Australiana-themed videogame. First released for the PlayStation 2, Nintendo GameCube, and the Xbox in 2004, it features more rangs, more vehicles, more mechs, and more EVERYTHING... in an open world Aussie Adventure. Rang, bite, smash and glide your way around the Australian Outback and stop the evil machinations of the diabolical Boss Cass and help the good folk of the little country town of Burramudgee.

The first Ty the Tasmanian Tiger game made its way to Switch, and now the developers behind that title are hoping to bring the sequel over as well. They need a little help through Kickstarter, asking for $75k to make the release a reality. You can check out the Kickstarter for yourself here.

Humans Took My Neighbors looking to come to Switch via Kickstarter

Monsternett year 19XX – All the monsters are getting ready for their Halloween celebration when suddenly ….. Humans start appearing from portals totally ruining the vibe and taking all the monsters to the Human World, Now it’s Anthony’s and Fenrietta’s duty as proud members of the monster squad to save the remaining neighbors and find the cause for this madness!

Use a variety of weapons to face the Human menace, Anthony’s yoyo, Fenrietta’s bat, guns filled with unholy water, frisbees you name it, everything goes when facing the Humans.

Save your neighbors or don’t with the game having multiple outcomes you’ll face different challenges if you fulfill your duty, or turn more monstruous if you see your neighbors perish..

Find out about the monsters and humans with secret collectables throughout the levels which contain details about the history and secrets of their worlds.

With a classic gameplay with lives system and usable items you’ll maneuver your way through the levels getting as far you can in each run, fighting menacing Human bosses trying to smite the Monster Squad.

Humans Took My Neighbors!' Kickstarter is currently ongoing. Heron Games hopes to raise $8,500 to develop the game full time and deliver by Q4 2021. Stretch goals include Switch Ports, hardcore mode, new characters, and 4 player CO-OP. Pledges for a digital copy of the game start at $10 and go all the way up to $60 for anyone who wants to help design a special enemy.

“Our goal for this game is to create a single player and co-op experience reminiscent of games of yesteryear with modern sensibilities, and an original setting flipping the usual monsters are bad guys around and a humorous and spooky vibe we love from ZAMN”. - Carlos Garza, Heron Games.

Skapp is a pretty unique skateboarding game, as it uses your smartphone as a controller. If that sounds like something you'd like to give a go, you can help bring the game to Switch by supporting the official Kickstarter, which has launched today. Read the full rundown of the game below.

Bound Games is happy to announce that Skapp´s Kickstarter campaign is live now! Players can now join the campaign to support this original take on skateboarding using a smartphone and a PS4™.

Lots of stretch goals (some of them still unannounced) as well as a bunch of different tiers will be available to backers. Bound Games has set a funding goal of €15.000. Those who pledge €175/$207 will get a physical skateboard deck, whereas players who go for the ultimate tier, which stands at €239/$283 will get the chance to be drawn as one of the hands-on the game.

Skapp is the world's first skateboarding simulator in which you control your board performing the tricks with your phone. Test your skills by combining tricks, manuals and grinds as in a real skateboard in a game that pays tribute to skateboarding fans as it contains authentic brands, skateboarding cultural references, and no limits to recreate any kinds of tricks! Players can enjoy Skapp either with Android or iOS as a controller. The game features different levels adapted for all kinds of players, as well as a crazy story mode in which people's hands rebel against humanity.

The game has been developed by Bound Games as part of the PlayStation®Talents Games Camp initiative along with the help from the local business incubator Lanzadera. Skapp will be first available on PlayStation®4 at a date to be confirmed.

First simulator that uses your smartphone as a skateboard.
Discover a crazy story mode in which people´s hands rebel against humanity.
Skate through different levels adapted for all kinds of players.
Test your skills by combining tricks, manuals and grinds.
Complete missions in different difficulty levels.
There are no limits to recreate any kinds of tricks.
Free skateboarding mode included, as with all skateboarding games
Authentic skateboarding brands and culture.

Haiku, the Robot has reached the Nintendo Switch stretch goal on Kickstarter, allowing for development on the port to officially begin. Described as a "cute robot Metroidvania" inspired by "classics such as Super Metroid & Castlevania: SotN and modern masterpieces like Hollow Knight," the planned release date for PC, Mac, and Switch is sometime in October 2021.

Two days are still left on the Kickstarter, so if you're interested in backing the project or finding out more details about the game, check out the page here!

We did it! We reached the Nintendo Switch stretch goal! I'm super excited to bring my game to one of my favorite consoles, and it's all thanks to you - the 939 backers who believed in me and the project <3

I'm going to go and order my devkit right now because I don't think I can wait until the end of the campaign haha I'm just too excited.

Let's see what other stretch goals we can reach in the last 3 days of the campaign :D we have more languages to be added to the game, a boss rush mode, a corrupted mode, and an alternative ending.

From the bottom of my heart, thank you again! (And 939 backers is a crazy number!)