The Ryuo’s Work is Never Done! coming to Switch in Japan on November 26th

The hit manga is getting a video game adaptation!
29 July, 2020 by nintendojam | Comments: 0 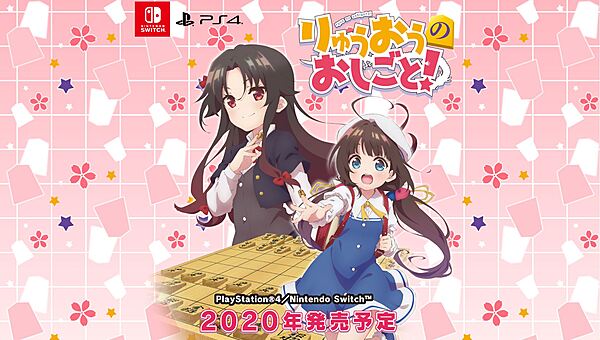 A game based on the anime/manga series "The Ryuo’s Work is Never Done!" is coming to Nintendo Switch on November 26th in Japan from publisher Entergram. The genre for the title is said to be a cross between visual novel, shogi, and quiz-based games. It will be releasing in Japan physically in both a standard (¥7,700) and limited edition (¥11,000), with the latter including a B2 Tapestry and a portable shogi set.

You can check out the game's teaser website here, or view the box-art for both versions below!

X Drake announced for One Piece: Pirate Warriors 4 as a DLC character (scan courtesy of @Asashi101) 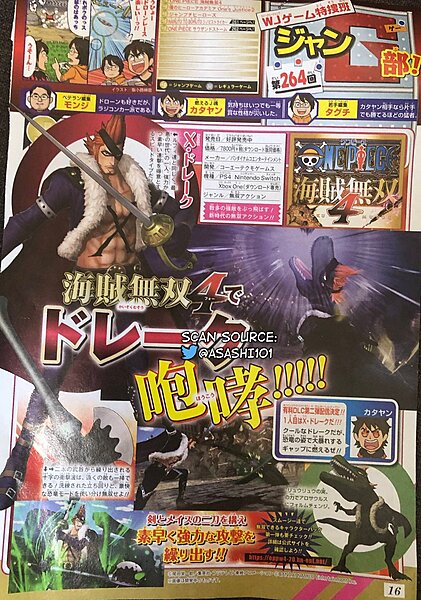 The next DLC character for One Piece: Pirate Warriors 4 will be none other than X Drake. Revealed in the latest issue of the Japanese magazine Weekly Jump, there is currently no news on a release date at this time. X Drake will be a speed-type character, equipped with both a sword and a mace, and can morph into a dinosaur. Check out a scan of the announcement above, thanks to @Asashi101 on Twitter!

Mei Hatsume announced for My Hero: One's Justice 2 as a DLC character (scan courtesy of @Asashi101) 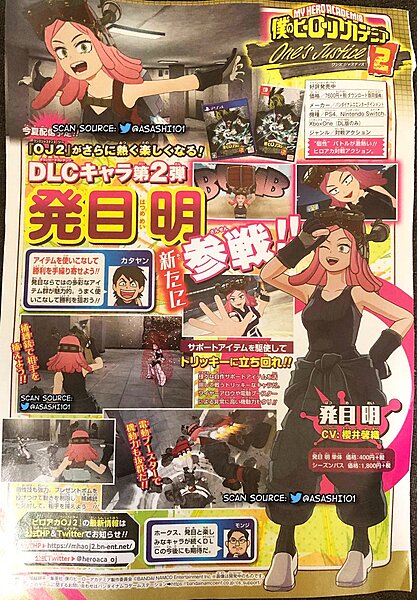 The latest issue of the Japanese magazine "Weekly Jump" has revealed that Mei Hatsume will be the next DLC character in My Hero One's Justice 2. Her character will specialize in mobility and support item utilization, and is expected to launch later this summer. Check out a scan of the announcement above, thanks to @Asashi101 on Twitter!

Square Enix announces The World Ends With You anime adaptation, details to be announced at Anime Expo Lite 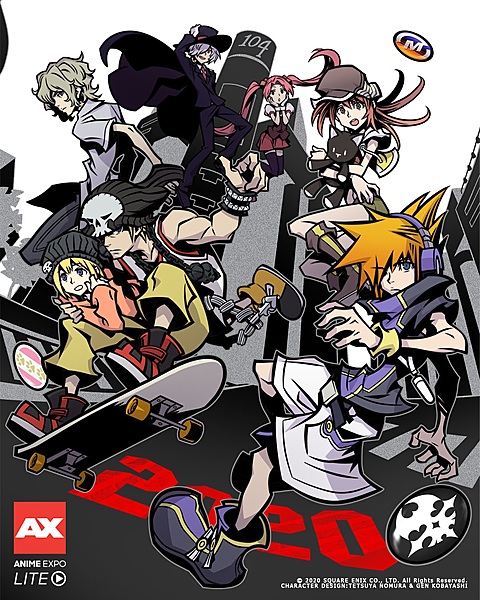 Square Enix has made the surprise announcement that an anime adaptation of The World Ends With You is in development. Details are currently limited, but more information will be revealed at Anime Expo Lite on Friday, July 3rd at 6PM PDT / Saturday, July 4th at 10AM JST. Check out the teaser website here, and the official twitter account here! 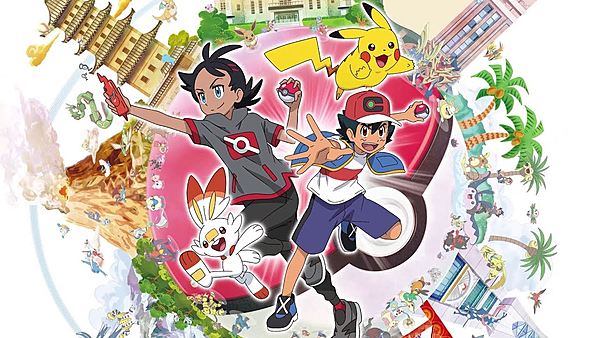 Looking to catch up on episodes of the newest Pokemon anime series? Although only available for viewing in Japan (without a VPN) The Pokemon Company has released all 17 episodes on YouTube for free! Available until March 31st, 2020, the anime is being offered to help with boredom due to quarantining from the coronavirus. Check out the full playlist of episodes here!

Momoshiki and Kinshiki will also be available as paid DLC for the current versions of NARUTO SHIPPUDEN: Ultimate Ninja STORM 4 - ROAD TO BORUTO on the PlayStation®4 computer entertainment system, Xbox One, and STEAM® via PC for $6.99.

MY HERO ONE’S JUSTICE 2 will features different game modes, each allowing for a unique experience.

- Story mode: The Story Mode will be playable from both Hero and Villain point of view and is faithful to the original anime. Over the top battles and breathtaking cinematics will set the scene and let players experiment their own justice!
- Mission mode: This mode will allows players to manage their own Hero Offices. By completing missions, players will be rewarded money and fame allowing them to expand their teams and recruit their favorite characters.
- Arcade mode: Each character will be able to fight pre-set battles and trigger exclusive dialogues.

Four new characters has also been confirmed to be part of the final roster :

- Gang Orca: One of the top heroes, his mutant-type quirk allows him to call upon the strength of the ultimate apex predator - the Killer Whale. He uses his enhanced sense and sound wave manipulation abilities to defeat villains.
- Seiji Shishikura: Seiji is one of the elite student of the prestigious Shiketsu high school. His quirk let him freely manipulate raw flesh, giving him an absolute advantage against any living creature.
- Camie Utsushimi: Another Shiketsu student, Camie is also one of the most promising hero-in-training of her generation. Her body can produce a mysterious fog that alter her opponent five senses putting them in a weakened state.
- Kendo Rappa: One of Overhaul’s henchmen specialized in close-range combat. He is a formidable fighter looking for the strongest opponents and striving for battle were he can stake his life on the line.

That was much quicker than expected! The English dub for the first episode of Pokemon Twilight Wings has been released on the Pokemon YouTube channel. Make sure you give it a watch above, or check out the Japanese version here!

The very first episode of the anime "Pokemon Twilight Wings" has been released, and is now available free to watch on Pokemon's Japanese YouTube channel. Currently, no English subtitles or dub is available, but the animation is absolutely beautiful! 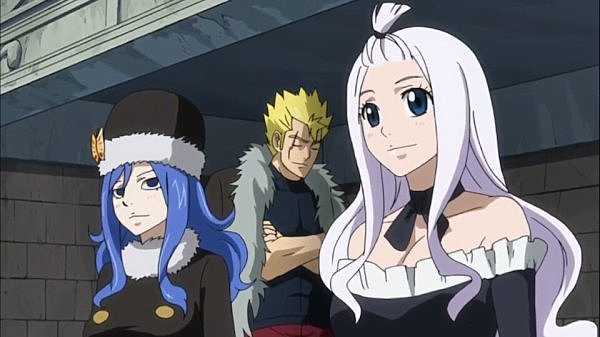 The RPG based on the Fairy Tail anime is launching on March 20th (19th in Japan), 2020, and more information on the game has been revealed via the latest Famitsu issue. Koei Tecmo and Gust have announced that Mirajane Strauss, Jellal Fernandes, and Laxus Dreyar will all be fully playable characters, with Mirajane having a Sitri form.

Unlockable character conversations will also be available in the game after specific conditions are met. Dialogue will be completely original, and feature a comedic flair.

Stay tuned for updates as the games launch approaches.