This is something I had posted on the old forums a few years ago and thought it would be fun to update. Also, on a related note, does anyone know the first Podcast that started with reading its Pokémon? It's somewhere between Webisodes 90 and 201, but I couldn't find any copies of that range of Podcasts still on the web.

So, given that every GoNintendo Podcast starts with reading off that Episode's equivalent Pokémon, I thought it would be interesting to see if (and when) the Podcast would ever surpass the number of Pokémon. Since the number of Pokémon obviously increases with every new generation release, we would first need to see if there is any consistent trend for the increase in Pokémon over time, and then try to extrapolate that trend into the future to compare with the (very consistent) GoNintendo Podcast release schedule.

Below is a plot of both; for convenience, I plotted both in terms of the number of days since the Japanese release of Pokémon Red/Green: 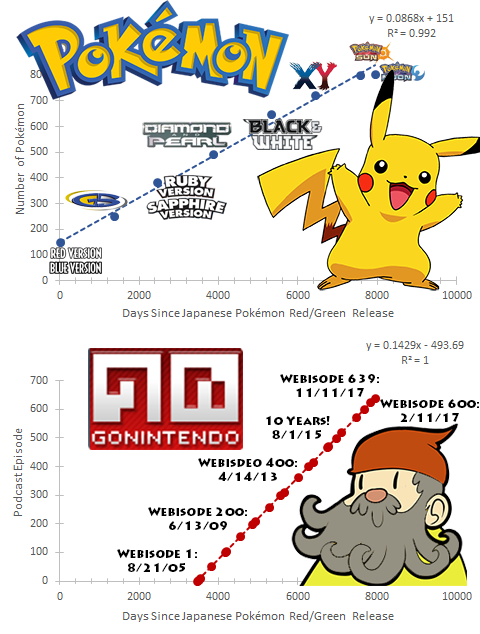 As can be seen, the release of new Pokémon is actually fairly consistent over time: each new generation comes at a fairly regular interval, and there is a fairly regular number of new Pokémon for each game. As expected, the GoNintendo Podcast release schedule is also very consistent (one new episode per week). Since the Podcast started after the first Pokémon release, in order for it to overtake the continual increase of new Pokémon, the slope of the calculated trendline for the Podcasts has to be greater (steeper line) than that of the new Pokémon releases, which it is! This means that the two lines will eventually cross if you extrapolate them, after which the Podcasts will no longer have associated Pokémon. When will that be? Well, we just need to set the two equations equal to each other and solve for X with our ever useful algebra skills. So, when will this happen? 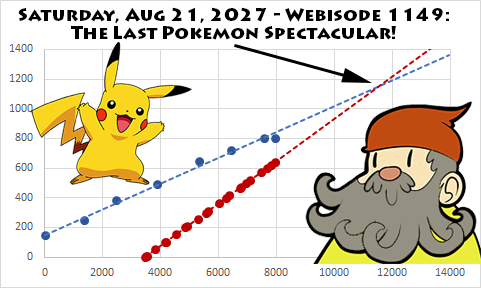 Saturday, August 21 2027, Webisode 1149 - After almost exactly 22 years, the Last Pokémon Spectacular! In actuality, this date is very variable, based mostly on the new Pokémon release schedule. For instance, when I calculated this the first time two years ago, the result was: Webisode 1275 on Saturday, January 26, 2030!

Most of the Pokémon variability is due to a large increase in the number of Pokémon all at once whenever a new game releases. For example, if a new game happened to come out just before you were about to run out of Pokémon, it could extend the date by nearly two years (since each game usually has on the order of 100 new Pokémon). Furthermore, it could happen that you actually run out of Pokémon, but not long after a new game is released, which will then extend the amount of Podcasts which have Pokémon! However, as long as the current trends continue in which the GoNintendo Podcast slope is steeper than the Pokémon release slope, there will EVENTUALLY be a point (sometime in the range of 2027 to 2030, plus or minus a few years) that you WILL run out of Pokémon, and that will be a sad day, indeed.

It's been two years and one Pokemon generation since the last post, so with the updated trendlines based on the new game's Pokemon, the new estimate for the Last Pokemon Spectacular is...

And here's the calculation for anyone curious...
https://drive.google.com/file/d/1JlAdqklbeuAKMd9N2Jw_MCyFDWLIK8fM/view?usp=sharing

Does this include regional forms (like Alolan Vulpix and Galarian Zigzagoon) and Pokémon released mid-generation (like Blacephalon and, I'm guessing, Regielectric)?

It's based on Wikipedia's list of New/Total Pokemon for each game. I'm assuming it doesn't include regional forms, only new Pokemon species (though I don't know for sure - however Wikipedia users have counted them). I decided not to make a new data-point for the "mid-generation releases" (i.e., Ultra Sun/Moon, Let's Go Evee/Pikachu, the Sword/Shield DLC), however whenever the next generation releases the new "total" count DOES count all of those mid-generation releases. Sorry if that's confusing, but for example, I have a datapoint for release of Sun/Moon with total Pokemon up to that release, and the next datapoint isn't until the release of Sword/Shield, but the new total also includes the new Ultra Sun/Moon Pokemon and Let's Go Pokemon.

I decided to do it that way because having those datapoints with only 2-5 new releases that are a year apart I think changes the trendline alot when the vast majority of new Pokemon occur at the start of a generation, usually around 80-100, every three years or so. Also, this small trickle of "mid-gen 'mon" seems to be a very recent thing, so I didn't want it to mess up the fitted trendline.

Just to clarify, since we're projecting trendlines into the future, the actual overlap will happen well past the current total number of Pokemon (895 with current DLC) at a projected number of 1171. The actual number will very heavily depend on however Pokemon were released in whatever future game is released before that. It could even happen that they run out of Pokemon, but the next game releases sometime later and they get enough new Pokemon to catch up.

This is mostly just a fun thing that I wanted to test a few years ago so I've kept it updated every few years. I found it really interesting that the amount of Pokemon release over time is fairly stable, and since the Podcast schedule is also very regular (once a week), it makes it very clear that the Podcast will eventually overtake the Pokemon.

Got it. Thanks! So the ones introduced mid-generation do count, though for the following generation

(I asked that because signs point to a large number coming out for this current generation via DLC expansions, and the line may get steeper.)

I volunteer to be the first Pokemon when they run out.

I would be interested in what your hidden ability is 😂

Hidden Ability: Screenshot
The Pokémon takes an image of the opposing team when they're looking a bit stupid and posts it in the Discord server. This lowers the opposing Pokémon's attack and defence.

Nicky Hill's ability: Slow Down: Slows everything down.

I'm not sure how I missed this post the first time around, but you put a lot of work into it. Love the graphics as well! It will be interesting to see when this happens. I always thought the number of new Pokemon would decrease with newer generations, but they just keep cranking them out to the point where even the biggest fans have/will have trouble remembering them all lol