"Ouendan!" ...oh they didn't come to help me with a subtitle 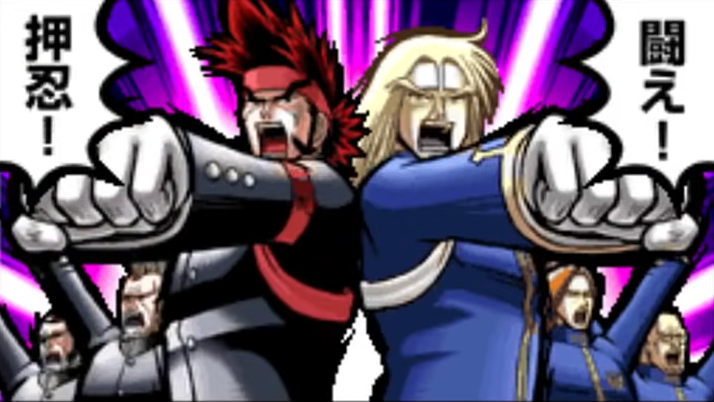 Times may change and cultures may differ, but there are universal elements of the human experience that tie everyone together. Those universal values allow us to empathize and relate with each other, even without speaking the same language.

Growing up, I was fortunate enough to have an older brother who introduced me to a lot of unusual games, particularly ones imported from Japan. Playing import games taught me just how universal games can be – so many are completely playable without being able to read a single word of text in them. One game taught me that better than any other: Osu! Tatakae! Ouendan transcends cultural barriers by providing a game that anyone can enjoy and relate to.

It rarely happens these days, but Ouendan was one of those games that failed to leave Japan. At the time, situations like this typically boiled down to the idea that westerners wouldn’t “get” the game and therefore refuse to buy it. I can certainly understand why the people behind Ouendan made the call that it shouldn’t cross borders, even if I think that’s a major shame.

Ouendan drenches itself in Japanese culture. It stars a Japanese cheering squad (the full title of the game translates to Go! Fight! Cheer Squad) that cheers to Japanese music. The conflicts you’re cheering to resolve often stem from or revolve around Japan-specific scenarios. Ouendan clearly reflects the country it came from in ways a lot of games avoid in order to maintain global appeal. That’s a big part of why Ouendan got a westernized sequel rather than a straightforward localization. Despite its strong ties to a particular region, however, I don’t believe specific knowledge of those Japanese ties is integral to enjoying Ouendan at all.

Enjoying Ouendan starts with the music. People like music. Don’t ask me to back that up with data. I can’t. This just seems like one of those broad generalizations I can get away with, you know? Since we all now accept my assertion as fact, it naturally follows that people like music games, too. Well, even if you can’t accept either of these points, that was the thought process behind wanting to bring Ouendan to the other regions in the first place. Ouendan designer Keiichi Yano believed there was a universal appeal to music games, and I absolutely agree.

People respond to music. That might come in the form of dancing or just tapping your feet, but music almost demands some kind of response when heard. Rhythm games take advantage of that natural reflex. They lay out the steps to perform and ask you to recite them with inputs tied to a song’s rhythm. In Ouendan’s case, it taps into that inherent response mechanism to music and challenges you to literally tap to the beat. 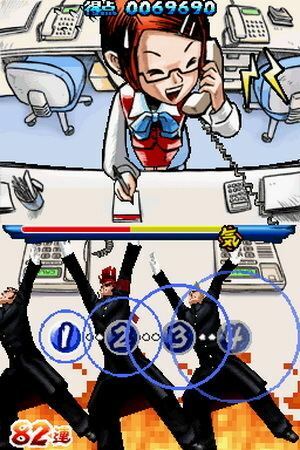 A tutorial at the start explains how to play, but as long as you know the kind of game this is in the first place, you really don’t need much explanation to understand things. I vividly recall my first time trying Ouendan: I didn’t know what kind of game this was and I was still able to figure it out. I was pretty dumb then and I’m not much smarter now; it balances out, though, because I’m pretty good at playing Ouendan these days.

Much of Ouendan’s intuitiveness owes to how the game mechanics are conveyed on an audio and visual level. Circles close in until they overlap the beat, indicating the timing of the rhythm. When hit correctly, the beats unleash oddly satisfying drums, whistles and shouts. The numbers indicate the order to hit the beats, which constantly leads you along the song visually. The spinner…well, that takes a little experimentation, but just by touching it you can tell it moves, and whenever it appears on screen a subtle whirring sound starts that reminds me of a washing machine spinning clothes around. I’m sure that was what they were going for. Probably. It all made sense to me, at any rate.

For rhythm games, music shares an equally important role with the gameplay. Ouendan’s soundtrack consists almost entirely of songs sung in Japanese. You might say that limits its appeal. I say it doesn’t really matter.

Music conveys feelings without uttering a single word. Yeah, you might miss out on some of the clever pairings between the lyrics and on-screen visuals that Ouendan revels in, but the core experience can be enjoyed regardless. I would say each song in Ouendan perfectly matches the scenario that the cheer squad is aiming to resolve, but that’s not quite accurate. The song itself creates the mood of the scenario, whether that mood is intense, inspirational, wacky, fun, or all of the above. The visuals in Ouendan are always over-the-top no matter the scenario, so the music guides your impression of each level overall. 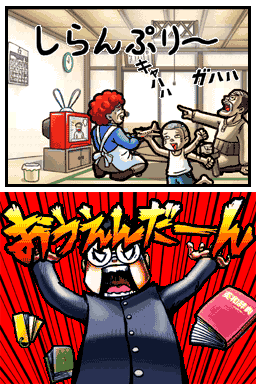 Just like how you can understand the general mood of a song without understanding the lyrics, you can also understand the stories of Ouendan without reading any of its writing. This is possible primarily because Ouendan uses the ancient art of the comic book to do the bulk of its storytelling. After all, they say a picture is worth a thousand words. When taken literally, this means I could have saved us both some time if I had drawn a picture instead of writing this article. When taken less literally though, the meaning is more clear – pictures can tell a story just as well as words can. Writers don’t like to admit that, but it’s true.

I’ve been “reading” comic books since long before I could read, so I appreciate how well stories can be told with images alone. Ouendan’s plots are relatively basic and easy to understand in the first place, but the artwork excels at bringing them to life and making them easy to follow. Movements are always exaggerated. Expressions are always extreme. Emotions always run high. You will believe in the plight of the horse on a mission to catch a criminal or the wolfman trying to go on a date. More importantly, you’ll relate to them.

Admittedly, there is a cultural barrier in some of these scenarios. If you’re from America, you may not worry too much about entrance exams, summer festival races, sumo wrestling, or giant animal kaiju attacks. I’m not sure how often that last one actually happens in Japan either, but they happen at least once a game in the Ouendan universe, so I assume the concept must be rooted in some truth.

If you strip away the cultural context for what lies underneath, however, the situations are easily relatable. Most everyone has had to take some kind of test, prove themselves to others, or overcome some kind of threat or obstacle. Whether you can relate to the specifics of each situation or not, they all share basic threads of human struggles. The conflict is always clear. We all have challenges to overcome and sometimes a little extra encouragement is enough to get us through.

I believe that’s why Ouendan carefully inserts mundanity into all of its narratives. No matter how absurd an Ouendan scenario gets, there’s a hint of the normal, everyday person hidden inside. A giant rat monster may be attacking the city, but the only superhero available to stop it happens to be an otherwise normal, overworked businessman. The Cleopatra plot may involve time travel and magic, but at the end of the day she’s just working really hard to lose weight. 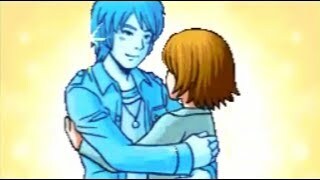 Ouendan likes to be goofy, but that doesn’t take away from the realities hiding underneath its playfulness. These games tackle genuinely serious issues like the loss of loved ones as well as more run-of-the-mill problems like stomach bugs or writer’s block without skipping a beat. Which is good, because skipping a beat would break its combo.

The common sense of everyman struggles culminates in the final stages of an Ouendan game, which always involve world-ending threats. These scenarios feel specifically designed with the idea in mind that although this game was made in Japan and is unlikely to leave it, the developers knew that there were people all over the world who could share in the passion that their wacky cheerleaders inspire. If we were all to unite and direct that passion towards a common obstacle, even miracles are possible.

Ouendan’s climaxes highlight the true power of this series. These are games whose appeal and relatability crosses borders and speaks to the common threads of human experience that tie us all together. Ouendan is a testament to how universally enjoyable and relatable video games can be.