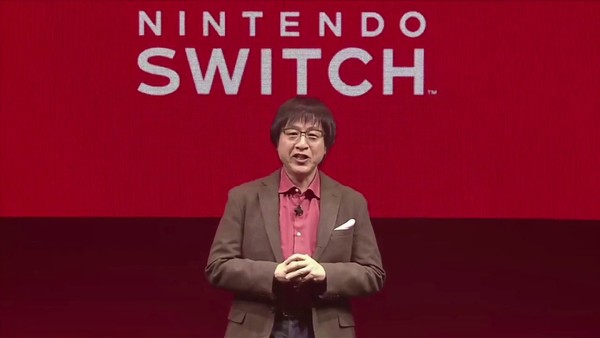 Coming from a Le Monde interview with Nintendo's Shinya Takahashi...

- Nintendo has been able to improve the Switch production line, so more units are coming
- Nintendo worked hard to make sure the Switch was easy to program for
- Nintendo has 11 production units for software, and each one of them is working on multiple projects
- the scope of Zelda: BotW's development team was quite massive, but Zelda games usually are among Nintendo's biggest
- Nintendo will continue to try and create more ambitious titles like this for Switch
- Super Mario Odyssey and Zelda: BotW shouldn't be compared as they're two different types of games
- Breath of the Wild was about open air and freedom, while Super Mario Odyssey is about being locked in a box
- Nintendo won't apply the open-air design of Zelda to every other franchise just because it worked well in Zelda
- Nintendo is open to other partnerships like the one between Ubisoft and Nintendo
- these partnerships must be beneficial to the player, and they depend on the project suggestions Nintendo receives
- the Switch launch titles of Zelda, 1-2 Switch and Snipperclips were chosen to showcase different aspects of the Switch
- the goal is to provide software that is unique to the platform and showcases what it can do
- Nintendo hasn't abandoned more "realistic" games like 1080 Snowboarding and Wave Race
- while Nintendo has a lot of projects in the works, they won't say that those specific franchises are coming back
- if Nintendo has an idea to pursue a realistic, yet fun game, they will certainly do so
- the way Switch software development is handled was done in order to make things easier for third parties to adapt their games
- Nintendo hopes people pick up Skyrim and FIFA in order to see the value in being able to take/play those games anywhere
- Nintendo believes third party opinion of the Switch has changed for the better since it launched

I plan on grabbing either FIFA or NBA. I would like to see more 3rd party support for the Switch. That's when you get more and more people.

How are you planning on deciding which one to buy? Are you a fan of either soccer or basketball? Or, have you played either of them before?

I personally will get both, but I'm curious how people who are interested in both decide which to get!

I like basketball personally but if the FIFA game was decent, I'd be willing to take a chance on it, why not right?

I'll probably bite for the first time with Skyrim on Switch... been a long time I haven't played a hunting simulator...

I'm not a fan of Skyrim or FIFA, but I plan on buying both as gifts just to support third parties on switch. I bought Bomberman, Streetfighter, binding of Isaac, cavestory, puyo puyo tetris, Disgaea 5, and I am setsuna hard copies, and I bought over 20 digital games too. (Including all the neo geo stuff to get my VC fix) I've been doing my job.

Love to see Nintendo fans vocally and monetarily supporting third parties. Thank you for doing that! As a Nintendo gamer, I really do appreciate it.

Just what is the problem if Nintendo fans don't support third parties?

If you're not supporting the games, why should they be on the system? Third parties do betters on other systems but people want them on the Switch. Anyone requesting third party games should buy the games they're begging so much for.

The original comment stated that he bought third party games to support third parties in general. Third parties are not going to give a damn supporting Nintendo no matter what Nintendo does in the end because they just don't like having their games on Nintendo systems.

Nintendo has had a long history not getting atleast western third party support and that kind of huge support while possible is just impossible to think of at this moment.

The real majority of sales comes from Nintendo games because they are made for the systems ONLY. Yeah sure, playing Skyrim on the go sounds nice but you can do the same thing on Nvidia Shield..which is about the same price as the Switch I think.

What should be supported is getting third party support from Japanese devs instead which I agree that is needed...but don't expect GTAV to come on Switch anytime soon because that cannot and simply won't happen..even assasin's creed might not happen.

Companies follow money. If people buy the games they will continue to make them. That's it. People keep buying just dance so Ubisoft keeps making it. Companies will jump through a million hoops and bend over backwards for a first party company if it means they will make a few million dollars.

Exciting to hear mention of Wave Race. That was one of my most played Game Cube games - I just loved trying to master the ever changing courses and it provided quite a significant - and fun - challenge.

Really enjoyed the presentation and the music too - the menus were atmospheric and the game played on the whole idea of water and sand - it made you feel good!!

An online Switch Wave Race would be awesome!! I do think they'll return to it - there's a reason beyond 90's excitement for extreme sports that this and 1080 exist: racing on dynamic and changeable surfaces can be really engaging and Nintendo have clearly invested quite a bit into nailing the feel of these games.

I've had my fill of Zelda and freedom, can't wait to be locked in a box

For the love of God, I've been waiting for a good jet-ski racing game since 2002! Don't tease me like that, please! And no, Aqua Moto Racing Utopia does not count.

Mother Russia Bleeds getting physical release from Special Reserve Games, Limited Run Games offering a variant cover
May 30, 15:52 by pajob
Reggie was confused for a security guard at his first E3
May 30, 15:45 by hammergalladebro May 30, 15:30 by drew ciccotelli
XCOM 2 Collection players reporting multiple bugs
May 30, 15:18 by clubcooljon
Final Fantasy Crystal Chronicles: Remastered Edition appears to have local co-op
May 30, 14:58 by hawk
Another Super Nintendo World pic gives us a look at the park's entrance
May 30, 14:06 by jd