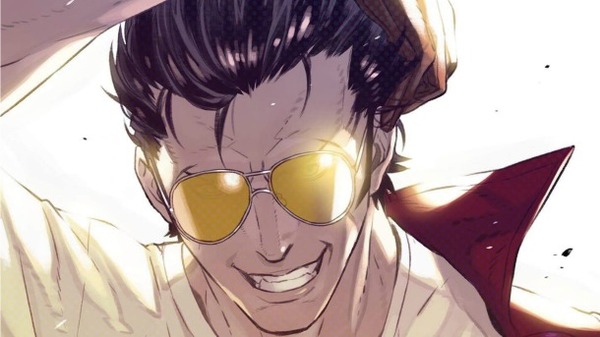 The following comes from a Nintendo Life interview with Suda51...

NL: Will gameplay reflect the indie games that appear in Travis Strikes Again, or will gameplay be in the style of early No More Heroes titles?

S: One thing that a lot of people seem to misunderstand is that there are definitely games inside this game, but they’re not actually the indie games that I’m collaborating with. They’re actually completely original games that exist in the world of No More Heroes, but they’re not existing games in the real world. In Travis Strikes Again, there is a game console called the Death Drive MK-II that uses these objects that we are calling Tiger Balls as games rather than cartridges or discs. There are six of these games that exist in the world.

For more backstory, the Death Drive MK-II was originally created by a character named Dr. Juvenile who works for a company called Hazure. She created this console and these games, and the console was announced but never actually put on sale because it turned out to be super-dangerous. The reason is because people who played this console ended up getting sucked into the world of the game they were playing and dying. There are six of these games that exist, and there is an urban legend – that Travis is trying to find out whether or not is true – that if you collect and clear all six of the games that exist, a tiger god will come down and grant you one wish. Travis is trying to work out whether or not that’s true, so he has to collect all of the games and beat them all to see if this console and the god that is attached to it will actually come down and grant his wish.

As for the games that you play, the fundamental gameplay for each game is pretty much the same. The genre of each game is different, but the fundamental gameplay is the same. The games that Travis plays in the game actually have nothing to do with the indie games themselves. The indie game collaboration is basically what we’re referring to as the “t-shirt collaboration.” The indie games that I’ve been going around and collecting to collaborate with, they’re going to be featured on Travis’s t-shirts. At this point there are 15 games, and Travis will have as many t-shirts that you can switch back and forth for however many games I’m able to collect before the game goes on sale.

NL: In previous No More Heroes games, each boss fight felt unique based on the various assassins that you came in contact with. Can we expect something similar with the bosses in Travis Strikes Again? If so, how might those play?

S: There are six different games that are going to appear in this game, so at the very least there will be six very different, really unique boss fights. The art and general aesthetic of the game is going to be really awesome, so I want everyone to look forward to that.

All of the new characters that are appearing in this game were all made by a new collaborator of mine who is an artist from the UK named Boneface. The characters in the game are sort of a collaborative effort between Yūsuke Kozaki and Boneface.

Is it like Kingdom Hearts but with indie games instead of Disney-owned properties, or is the collaboration only for t-shirts?

God this announcement was done horribly.

I think he's trying to say the actual game worlds are original content and not based on real indie games, with the Indie collaboration possibly being limited to collectable t-shirts.

This doesn't help at all in clarifying.

Sounds to me like kingdom hearts is a good analogy, but the world's you'll be visiting will be original "games" made up by Suda. The indie collaborations will be cameos, like how there's final fantasy stuff in Kingdom hearts.

Goodness this guy likes to be really rambly and confusing... Is that the norm from Suda? (Having only heard of him back when it was announced at the Jan event)

Maybe this is why the majority of Suda's best games had Nintendo's help... he seems to get a bit muddled without someone reigning him in.

Suda is a wild and crazy guy, but I think it's obvious that the collabs are just for t-shirts. And it's exactly what I expected when he revealed the shovel knight shirt and the interviewer asked "will we get a shovel knight shirt in game" and he said yes.

"There are theories going around that the antagonist from the trailer is possibly Bad Girl from the original No More Heroes game’s father or a relative. Could you shed some light on that?