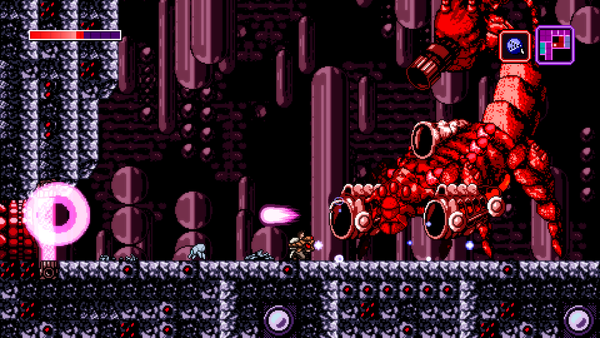 LAS VEGAS – September 12, 2017 – Tom Happ is proud to announce the worldwide Nintendo Switch eShop launch date for Axiom Verge will be Thursday, October 5. This represents a change from the previously announced date of October 17. The reason for the change is that the retail Axiom Verge: Multiverse Edition, published by Badland Games, will be delayed until November due to production lead times. An updated release date for the retail version will be announced soon. In the meantime, fans can pre-order the physical version now. Further information and retailer links can be found at: http://badlandindie.com/axiom-verge-multiverse-edition/.

Axiom Verge is an action-platform-exploration game that's not only created in intricate detail in the style of classics such as Metroid, Contra, Bionic Commando, and Blaster Master, but also uses those old-school "glitches" that we know and love as a gameplay feature. You'll use them to scramble enemies, corrupt environments, and pass through walls into hidden areas in a massive alien world.

Features:
Explore an expansive non-linear alien world with more than 900 unique, interlocking rooms.
Gobs of unique tools and abilities, loads of weapons, and tons of health/power/attribute upgrades.
Battle with nearly 70 unique creatures and gigantic screen-filling bosses.
"Glitches" now allow you to break past the boundaries of normal gameplay.
Speedrun Mode – Play with a streamlined interface and additional features to facilitate speedrunning.