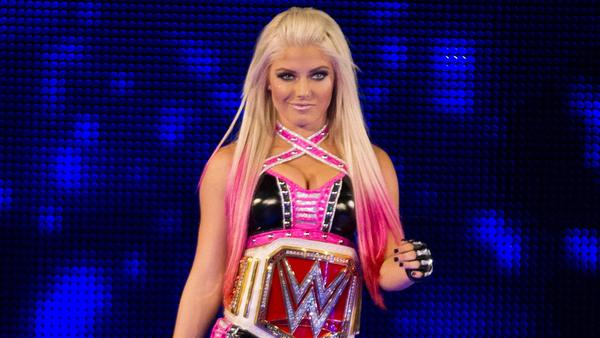 A portion of an NBC Sports interview with WWE Superstar, Alexa Bliss...

NBC: So what game did Larry-Steve pick for you to download on the [Nintendo] Switch?

AB: “Mario! The Rabbit Kingdom. I was trying to find a game and all of a sudden Larry-Steve jumped on my lap and just started moving the Switch, so I was like I have to get this on video. He was doing it for a lot longer, but I only caught a couple seconds on video.”

NBC: Are you a big gamer, or did you see someone else with the Switch and said to yourself “I need one of those”?

AB: “No, I love video games. So my fiancé and I went through this phase recently where we got all of the older gaming systems. We have this box that plays old Sega and Nintendo games. We have the original Playstation, recently just got a Game Boy. We have an Xbox a PS4 Pro and the Super Nintendo that just came out.”

NBC: I got the Switch back in March and it’s a life-saver on my commute

AB: “Oh it’s the best. It seriously saves my life when it comes to traveling because I get so bored so easily, especially when a plane doesn’t have WiFi … ughhhh I die.”

Thanks to Bamf226 for the heads up!
Submitted by: bamf226
Source: Link
Rating: 7

You have no idea how disappointed I was to hear that. I stopped reading at that point. JK.