RUMOR - Konami bringing their WiiWare trilogy to Switch, and including a brand-new 4th title 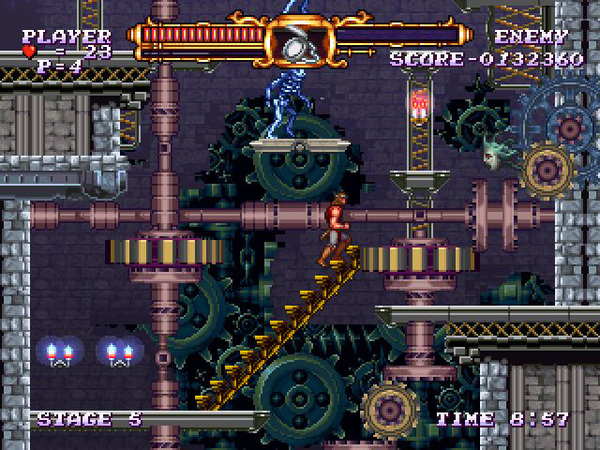 Rumor has it that Konami is bringing some games to Switch, and their plans include some ports and a brand-new title.

Back on the Wii, Konami released a series of ReBirth titles featuring classic brands. Gradius ReBirth, Castlevania The Adventure ReBirth and Contra ReBirth were all pretty fantastic titles, and word on the street is that they're coming to Switch. Along with those titles, Konami is apparently working on a 4th ReBirth title, but no specific details on that project have been leaked.

Wiiware was a magical time man...

Wiiware was a magical time man...

I would rebuy every single Art Style game at full price without even thinking.

With the original Wii shop shutting down I hope a lot more WiiWare games get Switch ports.

I was literally just thinking about how they should re-release these, earlier this morning. What uncanny timing!

Please think about some more 2D Castlevania too

If it were this simple, life would not be such a struggle.

But I'll give it a shot.

I don't know who he is. What makes him not credible? When I see his Twitter profile I see a lot of people that I follow also follow him (including Nintendo and Sony employees) so that alone makes him more credible to me than some random scrub off Reddit that often get linked to on this site.

Unlike the other leakers, he hasn't really had much exclusive info that he's gotten right in the past, IIRC. AFAIK most rumored info he reported on was reported by other places first. I'd love to be proven wrong though, and I at least think he's still 1000000X more credible than SuperMetalDave.

Smart decision to bring these over.

A new 2D, back to roots Metal Gear? I'm very down.

Dude that would be the best thing ever o_O

This would be great! Games shouldn’t vanish because of online services being shut down. A retail release would be best for preservation but anything would be good.

These games were good. I actually liked that WiiWare had some nice exclusives like this that Xbox Live Arcade and PSN didn't get. But Xbox 360 Marketplace and PSN (on PS3) are still up and running and won't be getting shut down any time soon, and very few are still playing their Wii or Wii U anymore, so it'd be nice for these games to get another chance (I feel Wii had so many casual gamers that most never bothered even looking in the Wii Shop Channel).

Wrap them all up together in one fancy cart and I am all in.

I'd definitely buy it, for whatever reason I never got around to getting them on the Wii despite wanting to get them years ago. As said above, with the Wii Shop Channel shutting down in a year from now it'd be smart for some of the companies who put out Wiiware titles to port their games over to other platforms like Switch. I think I've even seen a couple games pop up on Steam, like I know Lostwinds is on there.

You know that you could have quoted me

But which Big Boss do you face, the original or the guy which had a plastic surgery to look like Big Boss?

I'm of course talking about the MG Awesome Arc (Outerheaven, Zanzibar) that culminated with the third episode on the PSX. Not the all over terrible Sequel Arc, and not the somewhat interesting gameplay wise but terrible story wise Retcon Arc.

So the real Big Boss. Not the dumb retcon Venom whatever dude.
A ReBirth version of Metal Gear 2 would be absolutely awesome. I mean if it wasn't just one game I would of course ask for both 1 and 2 but yeah.

My guess is going to be Jackal Rebirth. They were working on it at one point for Wiiware and a few screenshots exist but it never got finished. Jackal is one of the best NES games out there and I'd love to see it get some love and come back.

Don't get me wrong, I would LOVE to see the ReBirth games ported. But the "source" offers no reason whatsoever to believe he didn't just make it up.

I'm pretty confused as well. I think, maybe, I remember this Stealth person being a fair rumor source years ago.

IGN (Italy), Nintendo Life, and GoNintendo have all covered this, with only the tweet as the source, so my conclusion is that one or more of these sites already knew the ReBirth series was being ported. Covering Stealth's leak is just excitement over the news, I guess.

And it could keep the motion controls, hehehe. :p

A freaking ton of rythmn games

It's obviously a rebirth of Metamorphic Force.

"And it could keep the motion controls, hehehe. :p"

What mo-ohhhhhh I get it.

"In regards to a 4th title let's see Konami's portfolio"

I do not actually believe this rumor, but I feel like whichever IP it is would be one of the ones that they actually cared enough about to include in Bomberman.

(That sentence feels so weird to write.)

Silent Hill, hmm, they have done weird things with that franchise, and Shattered Memories could work with the joycons.

My bet if true is Goemon, is like the Kirby series from Konami, they could make a one and done attempt.

I think something bold would be making a licensed game that was cherished and still in the consciousness of the masses. Or a quick one would be ripping Capcom's Disney collection and make one of their own.

"Silent Hill, hmm, they have done weird things with that franchise"

"and Shattered Memories could work with the joycons."

If we got Shattered Memories, that would be more of a straight port than something I would expect under the Rebirth branding.

"I think something bold would be making a licensed game that was cherished and still in the consciousness of the masses."

Hmm... Goemon Rebirth would be nice.

The 3 first games were NES classics. They had iterations beyond these but they started on NES. I think that was the idea to begin with. Even though I would LOVE a Goemon ReBirth.

don't think the series concept has anything to do with the NES.

Contra and Gradius series started in arcades, Castlevania The Adventure Rebirth isbased on the Game Boy Game and all 3 games have SNES/Genesis - inspired graphics.

Oh... and let's not forget about the 1991-inspired arcade style soundtrack! The Orch5 Fairlight CMI sound goes great in every KONAMI arcade games.

I want Sunset Riders to come back, but...