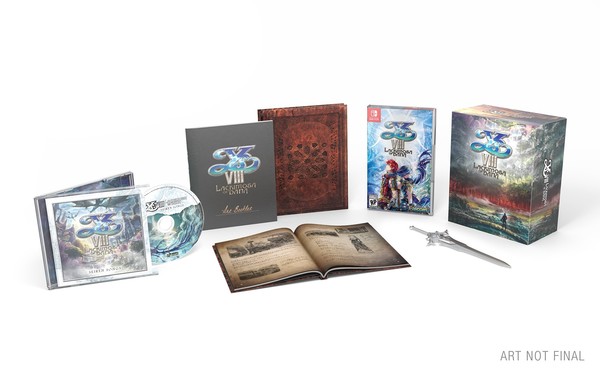 Adol, Dogi, and the rest of the gang are back in Ys VIII: Lacrimosa of DANA - now for Nintendo Switch™!

Adol awakens shipwrecked and stranded on a cursed island. There, he and the other shipwrecked passengers he rescues form a village to challenge fearsome beasts and mysterious ruins on the isolated island. Amidst this, Adol begins to dream of a mysterious blue-haired maiden living in an unknown world. Join Adol as he unravels the riddle of the cursed isle and the blue-haired maiden Dana in Ys VIII: Lacrimosa of DANA!

An Epic Tale - Follow Adol on his latest adventure and uncover the mysteries of the cursed island.
Party On! – Change your playable character on-the-fly as you battle ferocious foes in lighting-fast combat.
Another Side – Unravel the mystery of the blue-haired maiden Dana through her unique gameplay sections.
It Takes a Village! – Rescue your fellow shipwrecked passengers and bring them to your village where they will provide valuable services.

No steelbook or bookends from the PS4 CE sadly but this is still an amazing game and if it runs at 60FPS like the PS4 version (or at least has all the content/runs better than the vita port) then every Zelda fan for the Switch should buy this day one, no questions asked. It's an amazing game

Havent played 8 yet but I like the series, instant preorder

Wish there were a way to get this without the other stuff.

NISA are really getting me to buy almost all of their special editions uh? Disgaea, Atelier, now this... I might get. I'm a bit short on cash. It's on my list though. I'll keep an eye on it.
It would be my first Y's game though.
Could someone give me a description of the kind of game? Recommendation? Warnings?