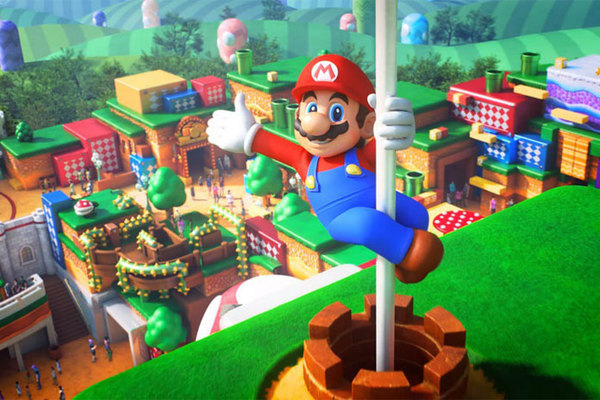 During their financial briefing, Nintendo confirmed a longstanding rumor. They are teaming with Illumination to create a Super Mario Bros. animated movie. Shigeru Miyamoto and Chris Meledandri of Illumination will be co-producing the film, and Miyamoto opened up a bit more on how the project came to be.

- Miyamoto has been considering an animated movie for many years
- he says creating games and movies aren’t really that similar
- interactive and passive media are very different, so if he wanted to make a movie, he’d like to have a movie expert work on it
- while meeting with many movie directors and producers, he was introduced to Illumination by Universal Parks & Resorts
- Meledandri revealed that he had read Miyamoto's interviews and said that the ways they create are similar
- the two ended up having a mutual understanding, and eventually said that they should do something together
- Meledandri is focused on making the film with a reasonable cost and deadline in order for it to be a success
- Miyamoto has felt that if they couldn’t make something interesting, then it would be better to quit
- they’ve already had multiple meetings for the screenplay so the project has actually progressed very far

Sounds good! Especially the recognition that if they can't make something interesting they'd better quit, combined with the notion that the project has progressed very far already.

That means they're onto something interesting.

Also the fact that he had spoken to multiple directors and producers and that there was a good click between Miyamoto and Meledandri is promising.

Can't wait to see what they've come up with!

Oh I would LOVE for Wario, Luigi, Waluigi and Mario to be in the film so badly for this reason!

But is the Mario Bros. Movie out on LD?

This movie only needs 1 thing to be a success in my book....

Get whoever voices Toad in the games to voice him in the movie. I want him/her to have LONG drawn out sentences/conversations. ONLY then will this movie be a true success.

Yeah you're sad they aren't spending John Carter of Mars money on it to ensure it's a hit. That's not necessarily a good idea. Having a high budget movie that does decent but doesn't improve on its budget will impact their perceived success more than having a moderate budget that makes a profit. It's a Mario cartoon for kids, not Lord of the Rings.

How many things to assume from what is simply me just making a correct guess some days ago! I don't have that much faith in Illumination Animation to begin with, so I'd hardly be concerned on whether they spent Scrooge McDuck money or a piggybank's worth, looking forward to that kind of quality bar.

There has yet to come a movie from that company that I enjoyed watching...

Nintendo is co-financing this movie.
I don't think Nintendo is gonna be too fond of spending $200 million on this movie after getting out of their heavy losses with the Wii U, especially with how much films have to earn to be profitable and this being a "testing the waters" situation.

Right. Reminds me of the new Ghostbusters. That movie did well in terms of box office but it had a ridiculously large budget at $185 million, which made it not very profitable and ruined (as far as I know) chances to continue the series. Keeping a reasonable budget can only be a good thing.

Also, nowhere near the amount of designwork needs to be done on this compared to most new animated franchises. Nintendo can just give the studio their models to tweak. The thing that held back recent Illumination movies like Secret Life of Pets for me (which, remember, was a monster hit) was the script. A budget doesn't really effect the quality of the script in the sense that there's no such thing as a $80 million script. (Though Amazon just licensed LotR from the Tolkien estate for like $100 million, so... There's USUALLY not such a thing.)