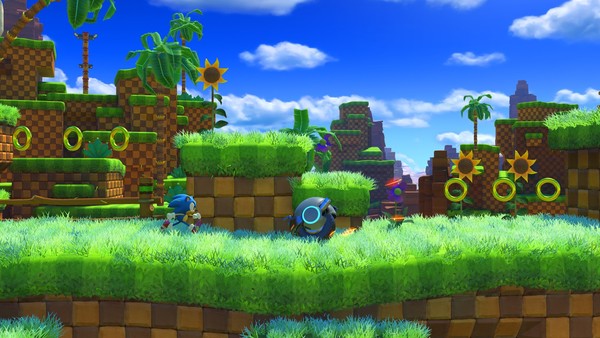 While we don't have specific figures on the sales of Sonic Forces, it does seem that SEGA is happy with the game's reception at retail. In their latest financial results report, SEGA states that Sonic Forces has "performed strongly" in the sales department. Hopefully SEGA gives more concrete details on sales soon.

Thanks to Lars for the heads up!
Source: Link
Rating: 1

Probably because they spent little making it and discounted it less then 2 weeks after it came out.

Please stop buying BAD sonic games. If you must have them. Buy them used, for crying out loud.

Can't wait for the people telling me "I REALLY ENJOYED IT!"

I enjoy some parts of Sonic 06. But its still a bad game. Just because you enjoy something doesn't mean its good.

It's a little asinine to compare Forces to 06. 06 is a trainwreck. Forces is just mediocre. Likewise, Sega is the issue when it comes to Sonic, because they're financially strapped and cut corners by rushing games out or by hiring and firing in large quantities, thus resulting in the development teams being jumbled around. Likewise...it's not super cool to tell people what they should or shouldn't buy. I bought Sonic Lost World and I supported the game because I personally think the parkor system is the right way forward for Sonic. Similarly I bought Forces because I think a more serious story and the option to create your own character are great additions to the series. I mean granted...I mostly bought them because I'm a Sonic fan, but the point still stands that there are reasons to buy Sonic games and support them for the features they bring.

Not telling me people, asking them. I even said to buy it used if you have to have it so Sega doesn't make money on bad products.

If people buy bad games or in your words mediocre games you will continue to get mediocre games. YOU, by your own admission ARE THE PROBLEM.

Or maybe people are allowed to enjoy a game for the price? I felt I got a good amount of enjoyment from buying the PS4 version of Forces and I really enjoyed the game save for three levels in the entire game that sucked.

Wasn't the best thing ever, but after generations on PS3 disappointed me with how loose it felt, this game made me really pleased and now I want to try Colors for Wii sometime in the future.

The only things I couldn't stand about the game were mainly related to the Switch port being at an icky 30 FPS instead of a smooth 60 (which for a sonic game is a nono) and the lack of achievements making the number and moon rings pointless in that version. I can totally see why the awful Switch port of Forces isn't liked at all, but I thought the PS4 version was a good game and I had a lot easier time getting into it than Mania which just drove me insane with Blue Sphere and Oil Ocean despite doing a lot of other things right. Mania's still the better game by far on the Switch but I think on other systems both Sonic games are good.

Also, you do realize there's a PS4/XB1 survey for the game, right? Where you can tell SEGA what you thought of the game? That's essential to letting them know what worked and what didn't eith forces and I gladly filled it out.

You thought Generations was loose? Compared to THIS game? The biggest problem with this game for me where the sloppy 2D controls. That and some horrible basic graphical design choices that makes it really easy to lose track of your character in the final levels. I didn't think the Switch version sucked, besides it being a bit blurrier and in 30FPS it's basically the same game and I wouldn't call it awful at all. The other 2 systems had problems of their own that the Switch version didn't have, but in the end they all had their share of problems.

As for Blue Sphere, it takes a while to get good at and click. You can move before the timer even starts. Oil Ocean... the boss just plain sucks.

Oh yeah, the Classic Sonic stages did not need to be there in any way shape or form, and outside of two near the end of the game they felt like beginner mario maker levels. But outside of that, I still felt the game was a lot better to get the hang of than Generations, since I never slid off turns except in a City stage near the end of the game (Which was the worst stage in the game bar none) and the stupid drift was gone. (but it would have helped in the aforementioned stage where I had to walk slow on purpose to not shoot off the corners randomly) I have a feeling Colors is the more solid game all around from what I see and hear, and that's why I want to try it, since it would have none of the stupid Classic levels and the boost formula isn't as loose as Generations. (At least, not the PS3 version of it, I hear the PC version is in 60FPS and runs better)

Oh, you were talking about the 3D segments when it came to loose. I think he controls decently in Forces even though the game kind of restricts how much you can move while boosting but I guess it's better than falling off stages constantly but I've had this happen in almost every game since Sonic Adventure. I remember getting frustrated in some of the stages for Colors too, but it's been a long while since I've played that. I had the opposite problem with Forces. 3D was alright but 2D controlled like oily bananas.

Did you play Generations on Xbox or PS3? You ever play the original trilogy? Thats 30fps bud.

I did play Generations on PS3, and it was awful, but that was mainly due to the bad control (Which I assume has to do with the framerate but didn't the PC version come until later? Either way it was my only option) and sonic constantly blasting off of ramps in 3D mode while 2D Sonic felt way too stiff. I also played Generations on 3DS before then and didn't like it because of how short and easy it was, but looking back it actually controlled a lot better as the 3D sections weren't really much different from the 2D ones (although that also makes it not have as much variety) and Classic Sonic had a homing attack which made his easy stages even easier.

My main issue with FPS is when a game is made for a higher FPS in mind, only for it to be downgraded and suffer because of it. If a game is made with 30 in mind with nothing else, then I'm fine with it, same for if the 30 FPS experience is barely different than the 60. I watch 30FPS gameplay videos all the time and the differences in viewing are minor, but when you play a lot of said games then it makes a difference. Heck, OOT, one of my all time favorite games only runs in 15 FPS on the N64/30 on the 3DS but I enjoy both versions as they were made with the system in mind. Sonic Forces at least tried to get the 60FPS control on the switch but when I played the demo on the Switch and then the PS4 one, it was obvious which one was smoother feeling. If a better version of the same game exists, then I'll buy it if it's on a system I own, which is just what I did with Forces and found it to be enjoyable for the $40 (any more though and I wouldn't really care for it as much due to the length)

Most of the time I don't even mind slowdown in retro games, as long as it isn't to the point where the whole game constantly moves at a super slow pace like Turbografx 16 Gradius, or makes the controls screw up and cause me to die.

Can't wait for the people telling me "I REALLY ENJOYED IT!"

This is really one of the most toxic and worst comments I‘ve encountered on this site recently. What is your plan here? Manipulate people to force them to believe your opinion is the only right one?

I enjoyed the game, it was a good game. Period. Seriously, people gone nuts these days. You literally insulted everyone who liked the game.

I feel bad for Sonic. While it seems he can still sell thanks to his brand, most of his games, especially in recent years, are seemingly not very well made. At least Mania was very well recieved, I believe. I hope it releases physically on Switch with that awesome Collector's Edition...

I might get flack for this but starting with Sonic 3D Blast/Sonic Adventure, that's when the series started going downhill and you can see there's a lack of polish compared to the other games that came before. I used to think of that SEGA polish that rivaled Nintendo where I could recommend a lot of games to anyone. All the Sonic games after that have either been bad or "ok". With the exception of Mania, there hasn't really been a game that can go up against his old red capped rival. I don't know if it's because a lot of people at SEGA left or Sonic Team just didn't know how to transition Sonic into 3D but who knows about the future. Mania is showing some promise.

Oh how unfortunate. This game was so mediocre. This game was super short you can beat it in 3 hours...Mania a game that costs $20 AND is WAYYY better you get more content than a game that was $40 at launch. The controls are sloppy, the level design is bland and you only get like 3 or 4 areas to run through that they reuse for all 30 levels. The story is lackluster and lacks any sort of stakes or consequences and YES this is a Sonic game at the end of the day it doesn't matter but don't market the game as having a deep and dark story then don't take advantage of it.

The soundtrack is extremely weak especially compared to Mania. Classic Sonic's gameplay is the WORST it's been since Sonic 4 episode 1 which is weird because (once again Mania) and Generations didn't have it perfect but it was sure as hell better than what we got here. Also Classic had NO REASON to be here other than to pander to nostalgia whores which once again is redundant due to Mania AND Generations already doing that and to a much better degree. The unlockables in this game are SO bad if you're not a fan of the custom characters which I wasn't or don't like collecting 5 red rings in a stage only to collect even more rings!

A poorly made game gets to sell higher than a better made game....let that sink in.

DOOM Eternal executive producer says the game is coming to Switch 'a bit later' than other versions, no date announced
Jan 21, 18:05 by giant_reggie
Netflix says The Witcher is on-track to be their biggest first season ever, reaching 76 million households in the first 4 weeks
Jan 21, 17:30 by fylo
Square Enix Collective is making a Switch announcement this week
Jan 21, 17:00 by drew ciccotelli
DOOM Eternal's director compares the game's difficulty settings to Mario Kart
Jan 21, 16:55 by drew ciccotelli
DOOM Eternal director explains why the 2016 game's mechanics weren't working for this sequel
Jan 21, 16:40 by drew ciccotelli
Sakurai reveals how many Playstation titles he played in 2019
Jan 21, 16:18 by anubis