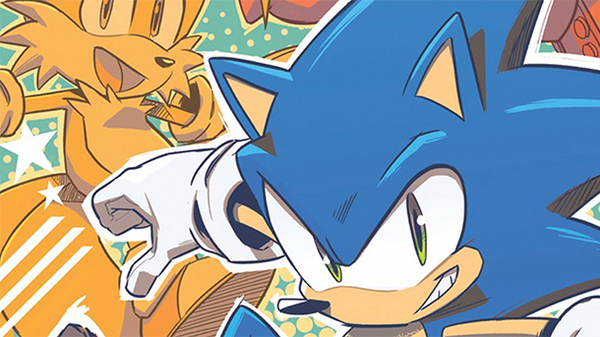 A portion of a Game Informer interview with IDW comic writer, Ian Flynn...

GI: You had some issues in the works before Sonic went to IDW. Will old fans get a sense of closure with the upcoming relaunch? Is it, in any way, going to continue or be based on some of the lore you established over the years?

IF: IDW is brand new. There's no connection from before aside from the creators that are involved. All of us are approaching this as a blank slate. This is fresh, new, just-off-the-vine Sonic. You don't even have to be super familiar with the games to get into it. If you know that Sonic is fast, he fights robots, and Dr. Eggman is a villain? Boom. You're set. I'm going to jump in and treat this series how Sonic adventures should be. Fast-paced and fun. Takes itself seriously enough so that you're engaged, but not so serious that you're rolling your eyes and saying, "Come on, this is a blue hedgehog. Chill out." I would love for there to be an opportunity down the line to at least cover the notes of what I would've done with the old series, but we are in uncharted waters at this point. The IDW book hasn't even launched yet. It's brand new and so is our relationship with Sega. We're feeling out what everyone's comfortable with and what we can do with the future. So right now, I'm not focused so much on resolving the past as I am setting up a successful future. Whatever comes from that down the line should be interesting.

I'm glad it is a fresh start, so that more people can get into the comic without having to wade through 250+ back issues, many of which are awful.

I never read the comics in full but for a while in the early 00s I read up stuff about them and kept wishing Sega would make a game based on the comic universe. Then Ken Penders happened and not only did my interest in the comic wane to the point that whatever interest I had in buying issues faded, and of course Penders himself managed to screw over the comic through a lawsuit he somehow won even though I'm pretty sure the characters he sued over were property of either Sega or Archie Comics.

It was pretty shocking that Penders won that lawsuit. I would say that... in most cases (if not every case), anything you create for your employer IS the property of your employer.

I mean, imagine if Stan Lee decided to cut all ties with Marvel, and take all the characters he created along with him. Not limited to, but including, Spider-Man, Iron Man, Thor, the X-Men, Hulk, and (topical because of the movie that just came out) Black Panther.

Yeah, it was always gonna be that [way too much baggage for new readers], but I really hope Ian can make some online documentation of what plans he had for the Archie cast at some point [RIP Sally, Bunnie, Antoine, Rotor, NICOLE, etc.]

He did start that process for the pre-reboot storyline on his bumbleking site, but he's only put out the first of five parts, and the other four are looking less likely.

Also, Sega technically owns the core freedom fighters like Sally, Bunnie, Antoine, and Rotor since they were around before the Archie license. Some of them (like Sally) are even in the Sonic Bible that Sega of America gave to licensees, but as the critters stuck in robots and not as freedom fighters. Ian is a big fan of those characters, too, so he might try to reintroduce them at some point down the line, but in a completely different way. Honestly, they'd fit perfectly in the storyline he's starting with (aftermath of Sonic Forces).

But it's a long shot. Despite all of this, I'm sure Sega would rather shelve those characters than have a potential lawsuit with Archie, even if they knew they'd win. So, yes, RIP.