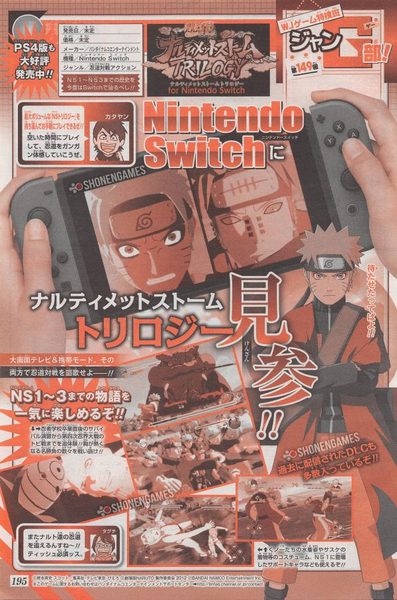 Looks like the rumor from earlier today was true! Namco Bandai has revealed Naruto: Ultimate Storm Trilogy for the Switch in the latest issue of Weekly Jump. The game will include all previously released DLC as well. No word on release date or localization at this time.

Ok, good... but in what way will this trilogy screw over retail buyers I wonder...

Edit: So this compilation is going to need a 32GB card... how many publishers actually bother paying to use this size? and why is there no 24GB card size available?

bet NARUTO: ULTIMATE NINJA STORM will be on the game card and you gotta download the other two games via included pack in codes. publishers have been doing this for the switch for some time now. pretty annoying

Nintendo themselves did it with Bayonetta; so much for setting precedence...

This is pretty cool. Don't screw up the packaging. Put all the games on one cart, not 1 game on cart and the other 2 downloaded from the eshop.