ARMS producer on the toughest character to create, and the potential for an appearance in Smash Bros. 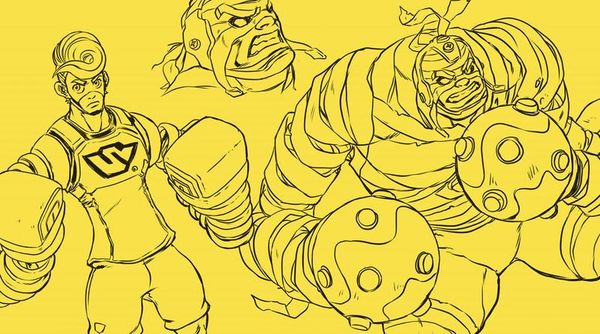 ARMS was a big part of Nintendo's first stage presentation of the Switch, and it aimed to show all the different things the Switch could do. Now the game has sold over a million units, which by all accounts, is a great consumer reaction for a new IP. Following his GDC presentation on the creation of ARMS, director Kosuke Yabuki sat down with Polygon to talk about the toughest character to create, and the potential for an ARMS combatant to appear in Smash Bros..

The most difficulty character to create

“...one character that maybe took a bit more time and we were more worried about was Twintelle. The starting point for that, the initial concept was just ‘someone who fights with their hair.’ Ninjara was a very straightforward character for us to make, but Twintelle came out of a desire to purposely do something different... We didn’t want to just make a character that had a very Japanese background, we talked to people in Nintendo of America and Europe, people from different regions, to create this character who would have a different background.

We spent a lot more time on Twintelle’s character and worked a bit harder, but when we put that first video out and saw those reactions, that made me very happy and gave us a lot of energy as we were making the game.”

On the potential for an ARMS character in Smash Bros.

“I think the correct reaction is to say ‘I can’t answer that!’. Another thing I’d say is that Arms is so young — it’s only a year old — that maybe it’s too early to think about that. But I think it’s absolutely fantastic that there are people out there talking about Arms characters in that way.”

I’d be surprised if an ARMS character doesn’t show up in Smash Bros. Seems like a sure thing.

I'd actually be surprised it an ARMS characters makes it in. The game has only shifted 1.61m and it came out at a time when people where starving for new games. Don't get me wrong 1.61m is a great number but it's no Splatoon 1 numbers (which was on a system that sold less than the Switch in it's 5 year lifespan). ARMS is by far not the success Nintendo was hoping for. Smash is indeed a great platform to advertise other games, so it is indeed a possibility. I just have my doubt. Besides it really all depends on the roster size, if Nintendo is keeping the majority, then I could see them adding an ARMS character, but if they are drastically reducing the roster, they won't replace a beloved/popular character for an ARMS character.
I actually think an ARMS character DLC is more likely.

But again, it's certainly a possibility. One never knows with Nintendo.

ARMS, besides Splatoon, is the only other new console IP Nintendo has released since Smash 4 (and for like, a decade basically). Not to mention, we're at a point where basically every major Nintendo character and franchise is represented in Smash. At this point, besides new iterations of characters (like a new FE protagonist, or new starter Pokemon, etc) they have to dig into the secondary and even tertiary characters just to bring something new because Nintendo isn't making enough new characters on their own to pull from. So I think an ARMS rep is pretty likely. Sure 1.61M aren't insane sales, but when you have 50-60+ characters, why turn down one of the few new ones?

It's not so much "Spring Man is replacing Wii Fit Trainer" but "Spring Man is getting in instead of Bandana Dee". They're going to have to make cuts eventually, and new characters are going to replace them regardless of whether people want them to or not.

You either add VERY few/no new characters in the base game, or cut a bunch of them for new ones so new characters can appear. If they couldn't cut anyone (or few) then it would have far less appeal because that's it's biggest draw. Sure it sucks losing some characters, but we also have 50-60+ of them. You're bound to like at least a few of them.

ARMS, besides Splatoon, is the only other new console IP Nintendo has released since Smash 4

Hey, what about SnipperClips? Though I wonder how much Nintendo actually owns of that

I think they only funded/published that. Maybe it'll get a stage or something.

"They're going to have to make cuts eventually, and new characters are going to replace them regardless of whether people want them to or not."

This is nonsensical with no factual bearing at all.

This is nonsensical with no factual bearing at all.

Said the guy who also said:

There are not going to be any cuts in the newest Smash game. MAYBE one or two characters if that.

That is based on the fact of 4 previous games.

So the idea that characters will be cut is not nonsense at all and has factual bearing?

Do you really think they're going to make new Smash Bros games without adding new characters? And if not, then you'd have to agree that characters are going to be cut because they can't just keep adding characters forever.

This should be obvious, not just because time/resources are finite, but we've already had characters cut in past games (despite Sakurai's best to include everyone). What makes you think that won't happen again?

What? This makes no sense whatsoever.

"characters are going to be cut because they can't just keep adding characters forever."

Where are the massive cut original characters in the first 4 games? Way more were added than subtracted.

I do not even know where to begin explaining to you how ridiculous this post is.

Yeah it sold nearly much as both Bayonetta’s combined (we don’t have very accurate sales for them or ARMS anyways and based on your 1.6 number I assume you got that from VGchartz)

I don't use vgchartz, they are unreliable. It's actually from Nintendo's webpage https://www.nintendo.co.jp/ir/en/finance/software/index.html
In my opinion, it's sad to see ARMS below 1-2 Switch.

I can see Twintelle being much more functional as an AT. Especially since others don't have something that can definitely be utilized the same way.

What we could get is Spring Man as playable, and then an ARMS stage that rotates to the different arenas with the corresponding character in the background (and possibly interacting/punching to the foreground). And there really aren't any bowl-like stages in Smash, so I think Min-Min's stage is a high contender. That, or Kid Cobra's stage with a bunch of spinning tops you could jump on. Maybe the DNA Lab where the chambers can act as walls, but also breakable (like Shadow Moses Island, but the chambers don't block off the sides entirely).

I'd love it if Min Min or Mechanica made it to Smash, but even if it's just Springman I'd be hyped as hell.

I'm sure at least one of them will be an assist trophy, if not a stage hazard or background element.

I'd say an ARMS character is just about given, Yabuki's answer may be implying that it hasn't happened yet, but on the other hand, he wouldn't tell us that there already is one anyway.

If we get an ARMS character, I think they're going to pull of a Villager and have Sping Man with Ribbon Girl as an alt costume and a moveset that involves changing arms for each move.

Of course Twintelle was harder to make than the other characters.

They had to put, like, 10 times more polygons in her model.

Spring Man is a lock. There is nothing to even think or talk about

Except he isn't... nothing is confirmed until it is confirmed, everything else is an assumption.

There are not going to be any cuts in the newest Smash game. MAYBE one or two characters if that.

Spring Man and Ribbon Girl feel like such cookie clutter characters. If they're going to include a character from ARMS, I feel like literally any other ARMS character would be better than those two (preferably Twintelle).

Don't see how Twintelle is much better... she's also a plain boxer, just one who fights with her hair.

Min Min gets a lot of attention, likely because she has kicking and a laser cannon in addition to punching like everyone else.