Bethesda working on polishing/optimizing Wolfenstein II: The New Colossus on Switch, has "nothing to share" on DLC 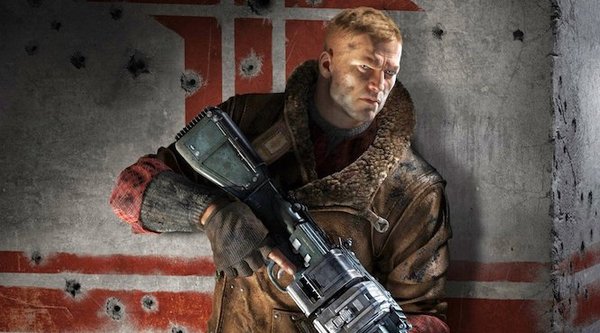 Wolfenstein II: The New Colossus will be releasing for Switch sometime this year, but it's not quite ready yet. What's Bethesda up to with the game? According to company comment on Twitter, the team is, “focusing on polishing the base game and optimizing it.” The same Twitter response addressed a question about Wolfenstein II's DLC, but simply responded by saying they have, "nothing to share at the moment."

Do you guys think that in the next few years third party games will start launching on Switch the same time as PS4/Xbox One or will they always do those first and then work on the Switch port?

I feel like a lot of games after E3 will be launching at around the same time as the other platforms. We're still early in the Switch's life, and a lot of developers were caught off guard by the Switch's popularity, so development for a lot of games was not occurring simultaneously between the Switch and PS4/One. But I feel like by the end of this year, early next year we'll see simultaneous releases becoming more common, at least for games where it's feasible. No way would a game as graphically complex as Monster Hunter World or God of War (yes I know it's a Sony exclusive, but that's beside the point) be ported to the Switch.

That makes sense as to why it hasn't typically happened yet and I am optimistic it will start happening soon. I feel that is my reasonable expectation. Sega had plans to do that with Valkyria Chronicles 4 but it was recently announced a delay for the Switch version in Japan (not yet known if it will affect other areas). I can cut them some slack if something came up that they hadn't anticipated; at least they tried. And I expect others begin making this effort and having it as their goal as well. I feel almost anything could be ported to the Switch; it just depends on how much of a graphical hit people are willing to accept.

I think we'll see the Switch getting games at launch simply because it's easier to develop for the weakest system and add features to stronger systems than it is to develop for the strongest system and then see what you can retain or approximate for weaker systems. That's how developers approach multiplatform games not coming to Switch; they make sure PS4 and X1 can handle the basic game, and then add graphics settings that high-end PCs can handle.

Note that there are some ironies here that are truly wonderful. PCs long ago passed consoles in power, so that anyone who trumpets their favorite console because of its graphics capabilities just doesn't know what they're talking about. Similarly, because of the necessity of developing for underpowered consoles because of the profit to be made, PS4 and X1 have actually stunted the technological advancement of games instead of contributing to it. I hope the Switch stunts it even more, making developers focus on gameplay as a way to stand out.

Hmm yes, very interesting. Do you see any difference between games from this gen (PS4 / Xbox One) and games from last gen (PS3 / Xbox 360)? To me, they are the same games with the only difference being more detailed graphics. But they don't do anything that couldn't have been done before that I have noticed.

I was gonna say that Battle Royale with its 100 people in a single match is something that's new to consoles, but then again, Fortnite and PUBG are also available for mobile devices, so they could clearly have been done on older consoles. Now, I can't even think of anything besides more detailed graphics that couldn't have been done on the 360 and PS3.

Ahh, I remember MAG. I forgot its player count was so ridiculously high though.

I've gotten the same impression. I suspect that the GameCube generation of consoles could handle the gameplay elements of most current games, because there's a limit to how much information a player can be expected to process and react to. The classic maps in Doom would support this argument, it seems to me.

Can anyone please offer some advice? Would this game look better on the Switch or on a Surface Book 2 with a GTX 1060 graphics card/16GB Ram?

Good to know, thank you!

1060 is miles better than the GPU in the Tegra. The Switch's GPU is about the same as a 920MX (a bit worse than that actually) and you would have to try hard to find a worse CPU on a laptop, especially one that has a 1060.

Consoles have a lot less overhead than PCs and games tend to be much more optimised for them. Still the gap between your laptop and the Switch is massive, so it would definitely be much better on your laptop.

I just pray the retail version is a complete game on the cart, I won't be buying this if they pull a Rockstar.

Bethesda has been known on other consoles to keep churning out patches months after release that weigh as heavy as the full game itself. A Switch physical release, admitting it fits entirely on a single cartridge, if you had to redownload the whole game on internal memory, that would have a much bigger impacf cause of the limited memory available for storage. The reason people buy physical is so they don't have to keep lugging around micro sd cards that are so easily lost, not to mention not so cheap. if getting it a few months later ensures that we won't need to download a 16GB patch a month later, that's fine by me. I need time to play the games I already have anyway, so I'm not in a hurry.

They have their work cut out for them. I've read several impressions that say it runs like crud on Switch.

And the game better all fit on the cartridge or I'm not interested.

that was only a beta and this LITERALLY confirms it's purely a working progress, the final version will run a lot better, that's what they mean by "Polish and Optimisation"