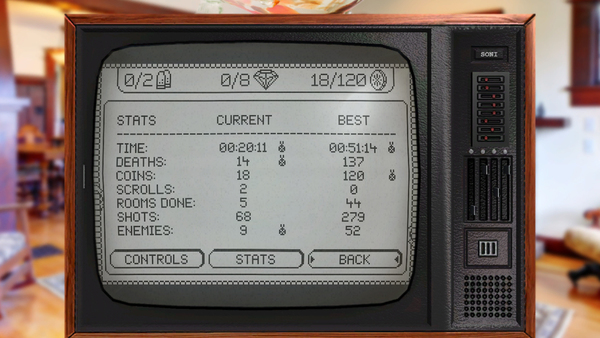 The dev behind The Adventures of Elena Temple was kind enough to share some details on the Version 1.1 update that's coming to the game soon. There's no official release date yet, but we'll let you know as soon as one is shared. Now let's take a look at what Version 1.1 will bring with it!

The biggest feature in Update 1.1 is the Stats screen inside the Options menu, where you can check out various info such as your playthrough time, how many times you've died so far, how many rooms you've fully completed, how many enemies died of your bullets and so on. Each stat has a value for the current playthrough and the best value over all your playthroughs. And that's not all! To give you an extra reason to start the game again once you've finished it, there are also medals to get for each stat, so sharpen your skills and try to go for the fastest time, fewest deaths or embrace your peaceful side and dispose of as few enemies as possible!

Update 1.1 also contains new unique music tracks for the final rooms and for the secret areas. And a few tweaks and bug fixes, like all updates should include.