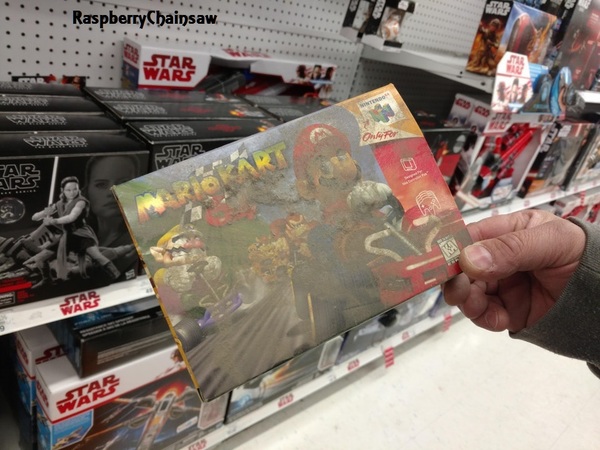 As you know, Toys R' Us locations in the United States are now closed. The fun is over and the toy store has gone away. That means a lot of those locations needed to be cleaned up. When one employee was cleaning up a store, they happened to find a relic of Nintendo's past. An original box for Mario Kart 64 which had been living under a shelf for all these years. The one bit of good news is that the box itself was empty!

"Box itself was empty"

Not sure if good news.

"Box itself was empty"

Not sure if good news.

Something people would actually buy, buried under all that Star Wars garbage. If that isn't emblematic of Toys R Us' closing chapter I don't know what is.

Looks like they've been racing Choco Island all these years.

Failure? The main movies have been doing great

Maybe critically, but they aren't a huge success among the people.

I mean, they still make money, because they are Star Wars. You can't NOT make money with Star Wars. But for TrU to go all in on merch when it doesn't sell, that's where losses can occur.

Star Wars is in the toilet right now. The Force Awakens made a lot of money because it was a new Star Wars movie riding on the goodwill the movies that came before it. The Last Jedi opened strong, but immediately fell off a cliff the next week. Imo, it's the worst Star Wars movie ever made. These news Star Wars movies are garbage. Rogue One is the only tolerable one.

The failure of "Solo" was a direct response to the sour taste TLJ left in people's mouths. It bombed hard. Even the prequels everybody loves to pretend they hate never bombed. For a Star Wars movie, even a side story, to bomb, is a huge statement from the movie going audience. The toys aren't selling well either. It was inevitable that something like this was going to happen the moment they announced they planned to release a new Star Wars movie every year. This video is one of my favourites. Caution: strong language.

TRU was doomed long before the new era of Star Wars...

Imagine if every Toys R Us had hidden N64 games. It could have saved the franchise!

The good news is someone obviously shoplifted the cart and threw the box underneath that shelf.

If I remember correctly, Toys R Us purchasing system was that the display box was always empty, you take a slip of paper which had the game’s barcode up to the front desk, pay for it then they give you the game and you go.

On an unrelated note, knew someone who worked at Toys R Us for a few years during college, he said it was super easy to steal returned gaming items since they were all thrown in a cart in the back room waiting to be dealt with. Maybe it’s his fault Toys R Us closed

Around 2001 I found an unopened NES Advantage at a Toys R Us, still on sale for a few bucks. It was a good find since all of my original NES controllers were long since worn out.

Why would an empty box be good news? It could've meant a near mint condition packaged game (assuming you could wipe off the grime safely).

It's not good because a thief is no good. However, from the perspective of looking back, what 20 years, at this point, that it was enjoyed by one or more...is good.

Mario Kart 64 was the final N64 game I bought new, and one of my earliest memories at Toys R Us, so this really hits a chord with me.

How's that good news, Kevin? A sealed, original copy would be good news for the person who found it. Strange logic, man.