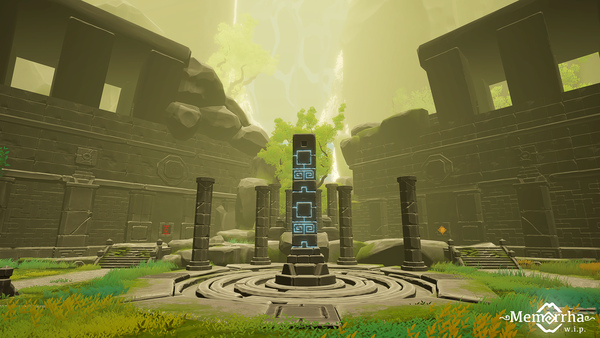 StickyStoneStudio are launching their debut title "Memorrha", a game with a mysterious world and full of puzzles. The developer intends to make the game available to as many players as possible and will launch their title on PC as well as on consoles in the first half-year of 2019. Registration for an alpha version of the game begins on July 18th 2018. Selected players will have the opportunity to test the game and take an active part in development by providing valuable feedback.

Fans of logic and puzzle games will get their money's worth: "Memorrah" presents picturesque worlds full of puzzles with stunning graphics. Similar to well-known representatives of this genre, the game places the focus on its core mechanic, which constantly develops over the duration of the game. This results in new puzzle types, presenting the player with even greater challenges. The puzzles influence the game world and reward players with more areas to explore.

The PC and console versions will have the same content, with the PC version to be released a few weeks earlier. "We want to offer players the best possible experience", says Michael Blatz (Korion). "This is why we will release the PC version first and then the other ones after." In doing so the developer wants to ensure that every version is optimized for its respective platform and runs smoothly. StickyStoneStudio are therefore benefitting from Korion Games' experience in porting games to consoles. The PC version will however be developed and published in-house.

The title is solely a singleplayer experience and offers you between 8 and 10 hours of joy and entertainment. Not only will fans of logic games get their money's worth, but also players who like to experiment and explore. "Memorrha" offers difficult puzzles for every age group, but stays family-friendly due to its story and graphics. "It's crucial to us that the game excites and entertains as many players as possible", stresses Nikolai Bartsch (StickyStoneStudio). "This week we'll be launching an alpha version and hope that many players will take pleasure in that. We will then use the feedback gained from the players so that the final version offers the best possible experience."

Korion Games is an independent developer and publisher for PC, consoles and mobile platforms. Their strengths lie in strategy games and platformers and in porting games to consoles. Since 2013 the company is active in providing games for entertainment and education and particularly experienced in performance-oriented development in Unity. More info on www.korion.de.