Smash Bros. Ultimate's mystery menu option may have been figured out 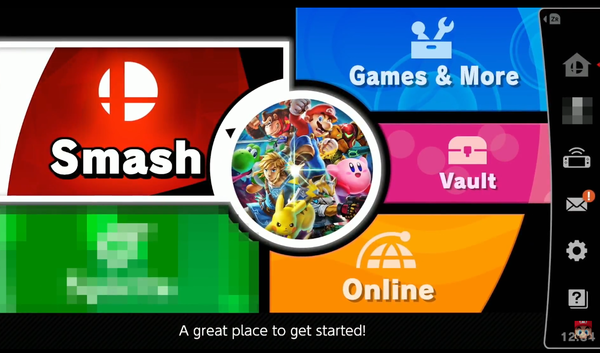 During today's Smash Bros. Ultimate Direct, the menu for the game was shown off. One option was blurred out though, leaving fans to speculate what it was hiding. As you'd probably expect, internet detectives got to work, and a solution might have been figured out.

in the japanese trailer, it's also visible, and it says スピリッツ which is the english word "spirits" in katakana ; not the word for spirit in japanese. pic.twitter.com/qatIqGLkde

Twitter user Noctulescent poured over the imagery and has come up with what he says is the word 'Spirits'. Now what that pertains to remains to be seen, as does confirmation that that's the word actually hiding behind the blur. One would think this might have something to do with another story element, but I guess time will tell.

Subspace Emissary was glorious for being the over-the-top mock RPGish game that had gaming's coolest stars all together against foreign threats. I hope they do it again and also throw in Nintendo enemies as well.

A spirited discussion will ensure!

Seriously, an adventure like in the Wii version would be most welcomed.

Spirit of Smash Bros. past.

Why would that part be in Japanese but the rest in English?

To confuse the Hell out of us! :D

Oh ok, that makes more sense, and also yeah you can sorta make out what it says when the screen is first zooming out.

If they DON'T have SOME kind of Adventure/Story mode......I just can't.

The Wii U game was a major letdown to me, because the single player content was so damn sparse. Brawl spoiled me in that regard.

I agree. I'm going to be so let down if there isn't some manner of story mode.

The thing is, some people care far less about that, and I get it. Those people mainly care about fighting other players, be it in person or online. But me? I've been a solo gamer most of my life. And while playing online can be fun, personally, I had an absolute blast playing Brawn by myself for the most part. ESPECIALLY the Adventure Mode. There was tons of single player content and tons of things to unlock in that game.

By comparison, even though it was pretty to look at, the Wii U game's modes/content felt sparse to me.

So yeah. I'll be very let down if they include, say, something more like Melee's simple Adv. Mode, because I was spoiled by SSE. But I'll still gladly take that over NO story mode whatsoever.

I hope it is not another original adventure mode with an original story. Sorry, but the subspace emmisary really overdid it.

My ideal adventure mode in Smash would involve small 2d stages that are cleared in less than 5 minutes, one for each franchise represented with playable characters (perhaps more for the vey big franchises), but instead of having to clear them all or in a set order with every character (like in Melee) a single adventure playtrough would involve clearing just 5 or 6 of those stages chosen at random.

What a lazy way to celebrate the most important enriching history for gaming.

What I meant is that my main problem with SubSpace Emmisary was that for the most part it felt alien to the franchises themselves. It was an original adventure mode, with the Smash characters and some elements pastiched over new enemies and new evironments.

It is an argument of connection vs representation...Subspace wanted to connect all the franchises in a single narrative. I would prefer to play in short and sweet separate stages without cutscenes that made me feel like I am clearing a Mario stage with Link or a Kirby stage with Wolf, instead of playing an original new scenario with the whole team again.

Subspace Emissary was glorious for being the over-the-top mock RPGish game that had gaming's coolest stars all together against foreign threats. I hope they do it again and also throw in Nintendo enemies as well.

I personally loved SSE. It felt like almost a whole other game of its own, INCLUDED with Smash Bros. I liked the story concept, of all these characters being thrown together into a new world they don't recognize, and have to work together to get out. Plus yeah, the "rpg-lite" mechanic was neat, and added replay value.

They don't have to do something JUST like SSE again, though I'd like it. But it would be nice to get SOMETHING that isn't half assed and tacked on. I would take what he's talking about over nothing at all. But I want a REAL story mode, with a REAL story, and some genuine single player content, regardless.

I'm waiting for them to release this as it's own series as an epic RPG!

I really don't mind if they have adventure mode or not, but I really missed the stadium and event modes from the previous games

That seems feasible. When you look at the effort they poured into that Castlevania cinematic, it really does make it seem like it's part of something larger. Two other villains got interesting cinematics, too (K.Rool and Ridley).

I'd really love to see this be an adventure-type mode with a story. I know that's expecting a lot since the game is already feature-rich and story modes aren't usually replayed much by players. Maybe they can craft something with a lot of replay value.

They are going all out on this game to really make it the Ultimate Smash Bros. How could it be "Ultimate" without a story mode? I am sure Sakurai knows this better than anyone. I will be shocked if there isn't a big single player mode.

I am really hoping for some sort of story mode. So far there is no single player in the game outside of playing battles vs bots.

I hope it's more like an improved version of Melee's adventure mode. A bunch of locations from a bunch of games mashed together with familiar enemies and bosses, topped off with CG cutscenes on par with the character reveals. No grand story or anything, just a linear celebration of all the games Smash Ultimate features.

Subspace just felt bloated to me. All the original stages and original characters were just dull...I only played it to see the cut scenes and fight the bosses from other franchises like Ridley and Rayquaza etc.

I think you're all wrong. It's clearly Smash Tour 2!

If Adventure/Story Mode does come back, I do hope that it's more like Melee's Adventure Mode rather than another Subspace Emissary. Don't get me wrong Subspace was still a cool idea but I personally found the execution to be a little lackluster in a few parts.

With all the effort on bosses in some stages, some kind of bossrush mode could be it, imagine bosses from tons of different games replicated in this, to beat in a co op mode for survival!