DOOM Eternal on Switch planned to launch alongside all other versions, Panic Button handling the game, will be 30fps 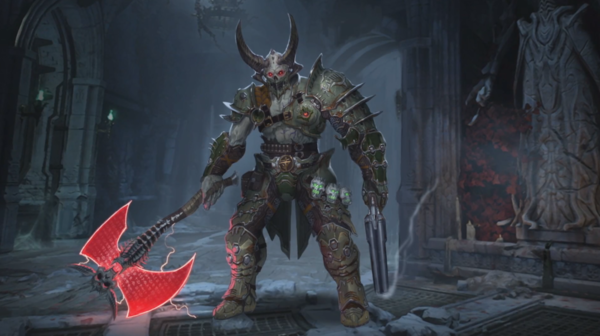 Sounds like id is going out of their way to make sure DOOM Eternal on Switch is getting the same treatment and attention that the other versions are getting. This isn't a port planned late after launch. Releasing DOOM Eternal for Switch was planned from the get-go. You can hear more on this and other tidbits in the Eurogamer interview snippet below, which features DOOM Eternal executive producer, Marty Stratton.

E: Will the game launch on Switch at the same time as PC, PS4 and Xbox One?

Marty Stratton: "That's the plan right now; we'll see. We're still a way away from launching but we have made the decision to make Switch a, what we call internally, 'first class citizen'."

E: So you're developing it internally?

Marty Stratton: No. We're actually working with Panic Button again, but before, we made the game and then we brought it to Switch, and now we are making the game with Switch in mind. It's nice to know the platforms we want to hit up front.

E: Graphically it sounds like you're doing even more with Eternal but you said it will run at 60 frames per second - on Switch as well?

I expected it to run at 30fps and I expect it'll have a low resolution too. Similar to Panic Button's other ports. It'll probably have that foggy/vaseline layer on top as well.

I expected it to run at 30fps and I expect it'll have a low resolution too. Similar to Panic Button's other ports. It'll probably have that foggy/vaseline layer on top as well.

You're such a nasty person. I think you like that you are.

As much as everyone hate him (her?), what he said is 100% true. There are no other ways for games like this to run better on switch without turning it into another game

Would you rather not have the game at all?

Bravo to Bethesda/id and Panic Button for really doing what first third-party companies do. Nintendo will hopefully have a good business relationship with them for a long time to come.

I call BS, because a game made with 60FPS in mind is a game made with 60FPS in mind. You don't downscale those things without some sort of compromise or comfort feeling being lost, and this isn't a turn based RPG where a lower framerate wouldn't be too much of a loss. Ys VIII for example had an FPS cut on Switch and it's the one thing keeping me from playing the Switch version as much as I want to of the PS4 version, even though the game's godly and it's a much better portable experience than on Vita, especially since higher difficulties and the game's own mechanic of perfect timing is much harder with the lower FPS.

I'd gladly take a mode that makes all the models super low poly with 60FPS over making the game look fancy any day, or an option like with FE Warriors. Guess it's PS4 for me with this game. At the very least, I hope this game is 30FPS locked hard and they make the Switch engine with that in mind, (since they aren't doing a late port of an existing game and they could actually design levels/difficulties/etc so that it's not at a disadvantage on Switch) to make for an enjoyable portable experience instead of a rushjob. I still prefer how they ported Rocket League and kept the 60FPS in handheld and commend them for that effort.

THIS. I'd prefer a mode that kept a 720p image and 60fps framerate in handheld mode even if it meant down-scaling graphics in other ways. Most options are preferable to a 360p/30fps game.

I'd honestly prefer if it was 240/60FPS if that was the only way to get 60FPS. Just as long as the original gameplay was intact. Have 720/30FPS for those who don't mind.

Doom 2016 was downscaled to death just to run at 30fps on switch (as DF said, it was much lower than PC's lowest), and Wolf 2 on switch had to be lowered to sub 360p as well to run at 30fps. Trying to make this game 240p just to have a smooth gameplay is like watching a 2007 youtube video on a 40 inch tv (your eyes will burn). So, a game like doom eternal running at 60fps on switch is basically out of the question. And if you think that lowering everything will make it run smoother, try playing XC 2 on handheld mode; it is a pixelated mess.

I love that the interviewer immediately challenges the "first class citizen" comment by asking if it's internally developed.