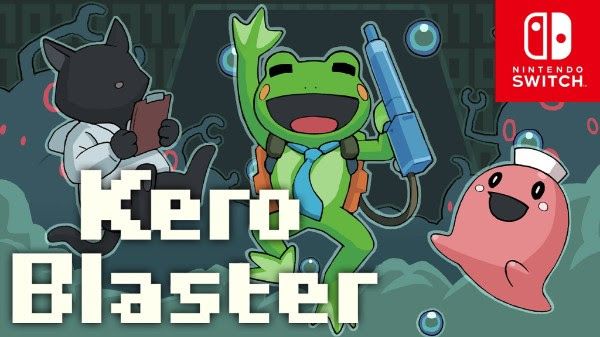 PLAYISM is proud to announce that the latest work from Cave Story’s creator, Pixel, is available now on the Nintendo Switch. On top of releasing this thrilling adventure, we will also be hosting an official fan art contest.

Kero Blaster is a side scrolling action shooting game from Studio Pixel, the creators behind Cave Story. Kero Blaster is out now on the Nintendo Switch.

Story
You play a bipedal frog employed by the mysterious start-up company "Cat & Frog Inc.". Fend off enemies seeking to stop you and overcome the challenging landscape as you head toward your destination.

When you start the game, you'll likely be surprised by your skimpy amount of life and your crappy weapon. And when the frog runs out of life, he "enters the hospital" and has to restart from the beginning of the stage. But you can keep collecting and saving up money to go "shopping" to increase your life and carefully select powered-up weapons to take down enemies you couldn't defeat before. The further you get, the stronger you can feel yourself becoming - and it feels good.

The characters appearing in between stages are the game's other charm point. You'll meet your coworker, who is a cat (for some reason), your president (also a cat), and an office lady of indeterminate species. They work like us, slog through overtime like us, complain, get chewed out, and even comfort each other, just like us.

Experience the unique and intricately detailed world of Kero Blaster!

Fan Art Contest
To celebrate the release of Kero Blaster, out now on the Nintendo Switch, we will be hosting an official fan art contest together with Studio Pixel!
The results will be posted to Switch Game News, so your art just might be seen by all kinds of Switch users!

How to Enter
First, follow PLAYISM on Twitter: @playismEN
Next, tweet your image of your fan art and use the hashtag #KeroBlasterFan
As long as the image is something Kero Blaster-related (character illustrations, logos, backgrounds, etc.), anything is OK! As long as each entry is different, you can enter as many times as you like, so keep those entries coming!
Winners will be selected by Kero Blaster affiliates, including the developers themselves.

Deadline
The cutoff date for entries is September 6th (Thu.) at 00:00 PST
Winners will be announced on the Nintendo Switch Kero Blaster Channel on September 13th (Thu.).

Prize
Award of Excellence (10 ppl.): “Kero Rhythm” – the Kero Blaster original soundtrack
This album is chock full of tunes deemed awesome enough to be released as a proper OST!